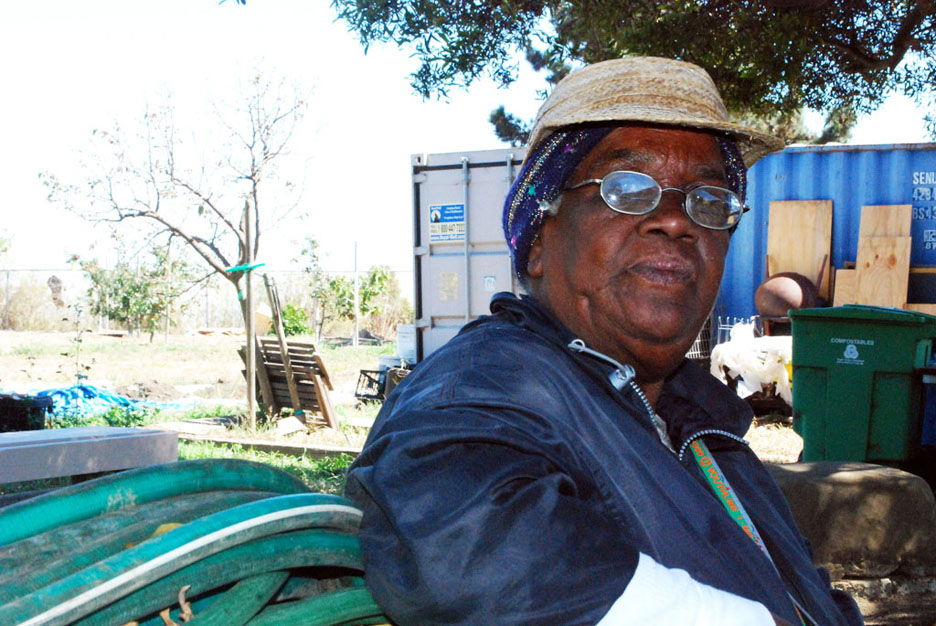 Jackie Williams starts the day off in her neighborhood garden. It’s a beautiful day in August, clear sky, still air, and the sun is shining. The straw hat that she got as a gift from her mother is her only hope against the unusually extreme San Francisco heat. She says the sun is too harsh at times because “it burns the plants.”

She checks out her black-eyed pea plant, and the peas are ready to harvest. She opens up a tiny pod that’s so dry it cracks. The three ripe and edible peas, along with the rest of the harvest, are ready to be given away and cooked by neighborhood residents.

Miss Jackie, as she is called by her students and co-workers, is a resident of Alice Griffith housing project in the Bayview Hunters Point district of San Francisco, where she works as a garden keeper. She loves her job and she loves where she lives, but she doesn’t believe that she will be able to keep these things when the developers come and tear down what she has called home for over 30 years.

Alice Griffith is part of a redevelopment plan called HOPE SF, which has been underway for the past five years. The program purportedly seeks to transform San Francisco’s most distressed public housing sites into thriving mixed-income communities. The staff at HOPE SF says it will replace every housing unit but that not everyone will be allowed to come back.

“By the time they begin the moving, at least 60 percent of the residents will have been moved out because of gang injunctions or not having the correct paperwork or just plain misinformation,” says Grace Martinez, a grassroots organizer at Alliance of Californians for Community Empowerment, or ACCE, formerly known as ACORN in the Bay Area.

Williams has been here since the late ‘70s, so she has been a witness to the economic and social woes that the neighborhood has gone through. When she first moved to the area, the homes were highly sought after, but now they have not been given proper attention and don’t have the same appeal.

“These projects used to be known as garden homes,” she says. “They were highly regarded because they actually have patches of land where you can have a garden or space for a yard.”

Alice Griffith, better known as Double Rock, was built to house military personnel. The Bayview Hunters Point neighborhood, where Alice Griffith is located, was where 2,000 temporary military barracks were built for workers. In 1945, Hunters Point Shipyard was the largest in the world and at peak production employed over 18,235 workers. Some families have lived there for generations.

The southeast sector of San Francisco is home to many Blacks who migrated from the South to participate in the job growth that the Navy provided.

Unfortunately, as the Navy closed its operations in 1974, the economic base of the community deteriorated, not to mention the environmental decay of the shipyard that has left residents suffering from a heightened rate of breast cancer, asthma and asbestosis.

“Different parcels have different levels of toxic chemicals in and around them,” says Sarah Kloss, remedial project manager for the Environmental Protection Agency, or EPA. “We have measured the horizontal and vertical length of the shipyard to get a better understanding of what needs to be cleaned up.”

Because of these environmental health concerns, the area has been labeled a Superfund site by the EPA and has been put on the National Priorities List for cleanup.

There are a number of toxic chemicals still contaminating the shipyard. According to the Agency for Toxic Substances and Disease Registry, there are more than 17 substances that can have adverse effects on human health. Elements, poisons and chemicals such as arsenic, volatile organic compounds, cesium, chloroform and radium have been found in the Hunters Point Naval Shipyard.

“These are cancer-causing toxins, and if they were to get in the air, they would not be good to breathe,” evolutionary biologist David Seaborg says. “The level of dosage is important, but there is reason to worry if a child is playing in these toxins and if they are being filtered into the water.”

“San Francisco has the highest rate of displacement outside of post-Katrina New Orleans,” says Jaron Browne of POWER, a nonprofit geared towards workers’ rights. “This points to structural issues and policies that the city is pursuing that are essentially pushing out African-American families and workers.”

He goes on to say that “the lack of development in the Bayview in the last 15 years is criminal, and we see it as a case of ‘environmental racism.’ But now that all this has happened, we want to focus on how development can help this community.”

The City and County of San Francisco’s Redevelopment Agency has recognized this area as a great economic opportunity, but unfortunately city officials took a long time to invest the proper resources into the area and left residents, who are mostly people of color, suffering from a number of ailments.

The name Bayview pretty much sums it up. The cascading hills, painted with colorful row houses, line the district’s main roads with points of land dribbling out into the Bay. The view allows gazers to take in San Francisco’s exquisite skyline and Bay Bridge. Sprinkled throughout the Bayview are fruit and vegetable gardens that provide its residents with healthy alternatives and a number of these gardens give free fruit to the residents. There’s no wonder it has been dubbed prime real estate for developers. 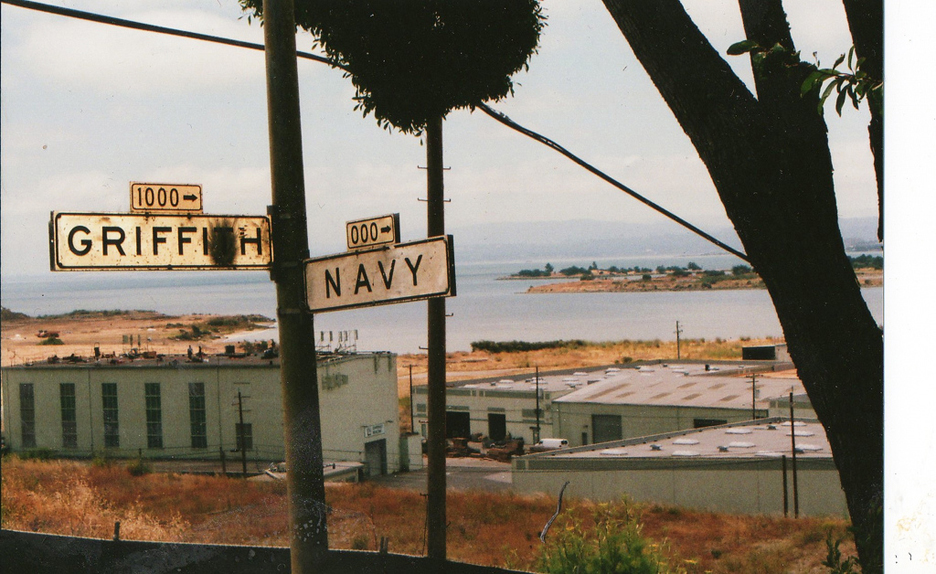 “We do not want this to be a tale of two cities,” says Thor Kaslofsky of the San Francisco Redevelopment Agency, or SFRA. “We want to create integration.”

Many consider Bayview Hunters Point a marginalized community because it contains nearly one-third of San Francisco’s toxic waste sites. It is also predominately African-American. The neighborhood has a population of 33,170, with the highest concentration of African-Americans in San Francisco.

Superfund is the common name for the Comprehensive Environmental Response, Compensation, and Liability Act of 1980, or CERCLA, a federal law designed to clean up sites contaminated with hazardous substances. The law authorized the EPA to identify parties responsible for contamination of sites and compel the parties to clean up the sites.

Aside from the Naval shipyard, there are a number of other pollution-causing factors in the southeast sector of San Francisco. There are over 300 toxic sites, including dumps, the city’s main sewage treatment plant, two major freeways, incinerators and, until recently, two power plants that the community campaigned to close.

“There is certainly cause for concern,” says former District 6 Supervisor Chris Daly, who served on the board of Bay Area Air Quality Management District, which fined Lennar Corp. $515,000 for failing to monitor toxic dust. Lennar was selected to be the city’s “master developer” of the shipyard, Alice Griffith and Candlestick Point, land totaling some 700 acres.

The Navy claims the Restoration Advisory Board (RAB) was no longer fulfilling its purpose. The RAB for the Hunters Point Shipyard was dissolved, but RABs are mandated everywhere and wherever a contaminated military base is closed, according to Superfund guidelines.

The RAB’s purpose is to voice community concerns about the cleanup process. The people living in proximity of the shipyard have consistently complained about dust and other potential harmful substances brought about by massive earthmoving work at the shipyard.

Navy is said to be more civil with other government entities

To make matters worse for these parties, POWER has accused Lennar of being in collusion with the San Francisco Department of Public Health and the EPA. Earthjustice, a nonprofit public interest group representing POWER, has said that emails between the health department and the EPA cover up health risks that should be known to the Superfund site’s surrounding residents. 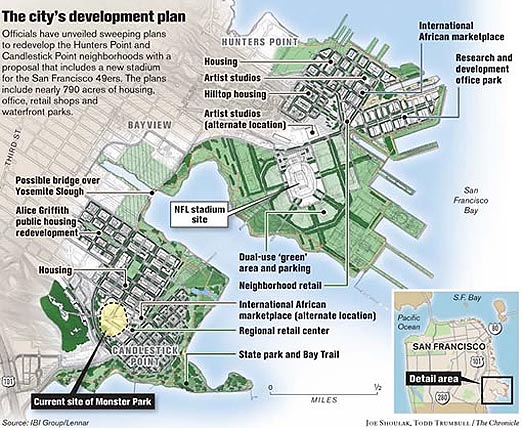 If POWER wins the legal challenge over Lennar, the San Francisco Redevelopment Agency and Department of Public Health, it will gain the following:

• Full disclosure of the human health impacts of the toxic contamination present on the Hunters Point Shipyard residents and workers.

• A required plan for cleanup of toxic materials before new development begins on the site.

• Means to hold Lennar accountable to the health of the community and the California Environmental Quality Act.

A whole new set of problems

Chris Norby, member of the California State Assembly, said redevelopment has become a form of corporate welfare and that some agencies have abused their power of eminent domain to seize private property.

“I admit that there is room for more transparency,” said Fred Blackwell, executive director of the San Francisco Redevelopment Agency at a debate hosted by the San Francisco Planning and Urban Research Association (SPUR). “But I am afraid that losing RDAs will do damage to the neighborhoods that I care about.”

Gov. Jerry Brown has proposed to close all 425 redevelopment agencies and planned to put the measure on the June 2011 ballot. Closing them would save California $5 billion, according to Brown, and the plan would divert the revenue to schools and local governments. California has the largest deficit in the country.

San Jose has already cut its Redevelopment Agency staff in half and says there are more cuts coming in June.

The California Redevelopment Association proposes alternative legislation. According to The Wall Street Journal, the RDAs would voluntarily contribute a greater portion of funds to school districts in exchange for certain benefits.

Redevelopment agencies have some of the highest paid positions in the state of California, but if these positions are cut, over 304,000 jobs may be lost. And lastly, RDAs are a financing tool for hundreds of projects around the state, including many in Hunters Point, where nearly the entire neighborhood has been designated a redevelopment project area. None of the projects underway or planned are by local developers.

Blackwell said that if the redevelopment agencies close, they will still be able to meet all existing obligations. Their elimination could be effective as soon as July 1, 2011.

“Why not eliminate just the bad ones?” Blackwell asked.

Crystal Carter, a freelance journalist based in San Francisco, graduated from San Francisco State University in 2008 with a degree in journalism. She can be reached at ccarter6@gmail.com. This story first appeared on Spot.us.