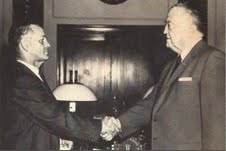 Third-party presidential candidate George Wallace, the former governor of Alabama, was in Omaha in March 1968 to qualify his American party in Nebraska. Wallace had arrived in Omaha on Sunday, the day before, and held an angry news conference to provoke a large turnout at his rally. The event was technically a convention and Wallace needed to collect 750 signatures to appear on the ballot.

A crowd of 1,500 supporters greeted Wallace on his arrival at the airport. Excited news reports of the visit put Wallace’s critics on notice, and numerous protestors dogged him on Monday as he campaigned in the city. Police guards had to hold off demonstrators blocking Wallace from getting into his car after speaking at Omaha University.

Mayor A.V. Sorenson assigned four uniformed police officers to protect Wallace by the city, and off-duty policemen were also hired for crowd control at the rally. George Wallace also traveled with his own security detail.

One of the protestors at the Omaha Auditorium Arena where the American Party convention was held was Mondo we Langa, then known as David Rice. Mondo was a reporter for two local underground newspapers, “Buffalo Chip” and “Asterisk,” and often played guitar at Holy Family Church.

On the floor were 1,000 Wallace supporters sitting on metal folding chairs. The balconies were full with several thousand more supporters. Mondo and about 50 other protestors, mostly Black, gained entry to the main floor and marched right in front of the podium charging up the crowd as shouts rang out.

Wallace delayed his entrance for nearly an hour while tempers flared from the front rows where some of Wallace’s most fervent supporters were seated. After Wallace came out to a thunderous ovation, the protestors got busy and jeered nearly every word.

Soon some of the protestors began tearing up their signs and throwing the bits of paper and stick at Wallace. Mondo attempted to stop the group from pelting Wallace but was sprayed in the face with mace by an undercover policeman. Two of the other demonstrators helped Mondo outside through a side door.

Police moved in to clear the aisles and suddenly the floor erupted in violence as Wallace supporters began hitting the trapped protestors with the metal chairs. The bloody battling continued outside the arena where $1,200 worth of windows were broken. Before the night was over the near north side was in riot.

Thirteen people went to the hospital with injuries and a 16-year-old was shot to death by police attempting to break in to a pawn shop. Horace Mann Junior High had 50 windows broken out.

On Tuesday. two dozen Black community leaders descended on the mayor’s office complaining about police conduct during the disturbances. That night more rioting continued with firebombs being thrown at businesses.

Police arrested two Catholic priests for their role in the protest at the auditorium. One of the priests arrested was Father John McCaslin, head of the Catholic Social Action Office and pastor at Holy Family.

Seven youth were arrested Tuesday night, including Central High School basketball star player Dwayne Dillard, who was scheduled to play in the state tournament, which had to be moved to Lincoln because of rioting.

The Federal Bureau of Investigation was also watching. The FBI director, J. Edgar Hoover, had ordered a secret counterintelligence operation against “Black Nationalist” groups, code-named COINTELPRO, into effect in 27 selected cities on Aug. 25, 1967.

Hoover’s secret COINTELPRO operation was established at a time when Hoover was taking criticism for the lack of action by the FBI on racial disturbances sweeping the nation and had been told his intelligence was not good. To blunt criticism from the White House, daily briefings were sent culled out of reports sent to FBI headquarters from the field offices.

The “confidential” FBI report to President Lyndon Johnson told of events in Omaha: “Omaha, Nebraska, police department advised yesterday that as an aftermath of the appearance of former Alabama Gov. George C. Wallace at a political rally on the night of March 4, 1968, several incidents of violence by Negroes took place in Omaha.

“Among these were the vandalizing of a pawnshop early yesterday morning and the subsequent fatal shooting of a 16-year-old Negro boy by an off-duty police officer during an attempt by the young Negro to loot the pawnshop. Several assaults by Negroes against white persons also occurred after the former Gov. Wallace rally and two of the white persons reportedly were seriously injured,” stated the FBI report.

The confidential memo concluded: “Public buses were stoned by Negroes as they passed through Omaha’s north side and yesterday morning Negro students of several Omaha high schools broke windows in business establishments while on their way to school. The students later caused minor damage in the schools by setting fires in wastebaskets in the restrooms and by throwing rocks through the windows of the schools.”

On March 4, 1968, the day of the Wallace rally, Hoover sent out a new COINTELPRO directive expanding the program to 42 cities, including Omaha, Nebraska. Hoover’s order would soon be put into action by Paul Young, the special agent in charge of the Omaha FBI office.

When Mondo we Langa was maced at the Omaha auditorium, he did not know that same day, far away in the nation’s capital, the director of the FBI had issued an order that would lead to a lifetime of imprisonment.

Paul Young, the special agent in charge of the Omaha office of the FBI, sent a report to Director J. Edgar Hoover on April 3, 1968. Young’s airtel was in response to Hoover’s directive a month earlier to establish a counterintelligence operation for clandestine activity.

Young wrote Hoover that an agent had been assigned to coordinate the COINTELPRO operation against “Black Nationalist” activity. Young said, “There is currently no organized Black Nationalist Movement within the Omaha Division.”

Young also told Hoover that there was only one Black nationalist on the “agitator index” list maintained by the bureau office. Further, “There are no organizations or individuals in the Omaha Division presently considered of potential danger as to be considered for counterintelligence action.”

However, Paul Young was well versed in the art of survival working under Hoover’s watchful glare, where any perceived slight would damage a career. Young wrote: “Omaha has no suggestions to offer at the present time regarding the over all counterintelligence program or administration of this program. It is felt, however, that this program can be very beneficial to the Bureau in helping to prevent the coalition of militant Black nationalist groups and violence on their part.”

The next day, April 4, 1968, Martin Luther King was assassinated in Memphis, Tennessee.

Rioting broke out in numerous cites and 50,000 National Guard troops nationwide were ordered into the streets to maintain order. The Nebraska National Guard was ready for action.

The recently formed Black Panther Party for Self-Defense, organized in California, experienced a surge in membership as chapters began around the country. Hoover’s COINTELPRO operation against the Black Nationalist Movement now had real targets, the Black Panthers.

On Sept. 8, 1968, Hoover told the New York Times that the Black Panthers were the “greatest threat to internal security of the country.”

Ten days after identifying the Black Panthers as the most serious domestic threat to the nation, Hoover testified to the Eisenhower Commission investigating racial unrest. Hoover lashed out against “vicious, hate-filled Black extremists.”

On Sept. 27, 1968, FBI official George Moore, head of the “racial intelligence” section, sent a COINTELPRO memo to William Sullivan, head of domestic intelligence, proposing an accelerated counterintelligence operation against the Black Panthers. From that point on, both men would monitor COINTELPRO actions against the Panthers and personally review reports from FBI field offices, including Omaha.

Sullivan was a veteran of dirty tricks and had led the FBI surveillance and harassment of Martin Luther King. Sullivan would later testify to the U.S. Senate that his COINTELPRO agents took a “no holds barred” approach to the war on the Panthers.

Moore would survive both Hoover and Sullivan and continued his nefarious ways at the FBI after the formal end of COINTELPRO in 1971. Moore was involved in withholding investigative information in Operation Newkill in New York City in 1974. 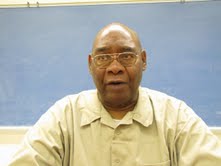 One Omaha man unaware of the sudden rise of the Black Panthers and the secret FBI campaign against the group was Ed Poindexter. Ed was in the U.S. Army, stationed overseas in Germany and Vietnam. A volunteer, Ed joined the service a half-decade earlier and was caught up in military life during the turmoil of the 1960’s.

As Paul Young, Omaha’s FBI special agent in charge, crafted a plan to satisfy Hoover’s COINTELPRO mandate, Poindexter was finishing up his tour of duty at Fort Benning in Georgia. Revolution was not on Poindexter’s mind; instead, landing a job at the post office in Atlanta was Ed’s immediate goal upon discharge.

Ed Poindexter’s introduction to the Black Panthers that he would later lead in Omaha came innocently enough with a newspaper clipping about the group from his sister. As Ed discharged from the army, he had no way of knowing his military service would later be used against him by prosecutors determined to convict him for the bombing murder of an Omaha policeman.

Ed Poindexter and another Omaha man, Mondo we Langa (formerly David Rice), are now serving life sentences for the 1970 murder of patrolman Larry Minard Sr. The Omaha Two, as the men are called today, were convicted following a controversial trial and have been imprisoned for the last four decades.

The jury that convicted the Omaha Two was unaware that J. Edgar Hoover had personally ordered the withholding of evidence about the identity of Minard’s killer and that the prosecution of the two men was carefully managed from FBI headquarters by George Moore and William Sullivan.

Michael Richardson has written extensively about the FBI’s Operation COINTELPRO and is working on a book about the Omaha Two, imprisoned in the last COINTELPRO conviction in 1971. His entire series of stories on the Omaha Two is available in the Examiner at http://www.examiner.com/omaha-two-story-in-national. Watch for more in the next Bay View.