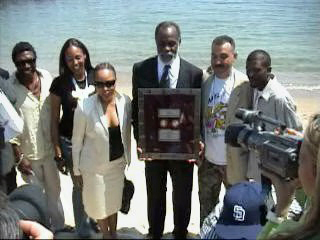 The 64th Cannes International Film Festival kicked into high gear with a galaxy of stars, writers, directors, producers, distributors and folks from all walks of life celebrating the film industry.

Robert De Niro, head of the jury voting “Tree of Life” as the competition overall winner, and his jury colleagues actors Uma Thurman, Jude Law and Martina Gusman; the writer Linn Ullmann, daughter of Liv Ulmann and Ingmar Bergman; and the directors Mahamat Saleh Haroun, Olivier Assayas and Johnnie To awarded the “très” shy American director and writer Terence Malick with the prize for the long awaited film, but he was not present to receive it.

Cannes is the only place I know where international business, partying and philanthropy mix. Deal after deal is made with over €700,000 Euro a day circulating through the 10-day festival. Any and everything from films to PR and marketing for films to theater chairs and popcorn makers are bought and sold.

Most “screenings” have a party or reception before or after. Beyond grand screenings and the Red Carpet of the Palais, the dream of screening at Cannes is still viable for filmmakers. Most independent filmmakers show their films at the theaters outside the Palais, utilizing the Star, Lumiere, Gray d’Albion Hotel and similar venues. These screenings can cost between €500 to €1,500 Euros depending on date, time and location. Buyers, distributors and media are invited to these private screenings.

One of my sayings is in Cannes, “party with purpose.” And the Macbach Party with Quincy Jones, Kanye West and new singing sensation, Aloe Blacc, “I Need Dollars,” was a super event to help mentors around the world.

Other international stars included Jean Pier Bekolo and Jean Roke Patoudem. Patrick Cunningham, protégé of Reuben Cannon, Tyler Perry’s executive producer, was in the African Diaspora mix at Cannes. Cunningham, a producer for the non-Afrocentric film “Martha Marcy May Marlene” received accolades for his film being in Cannes’ Un Certain Regard category. 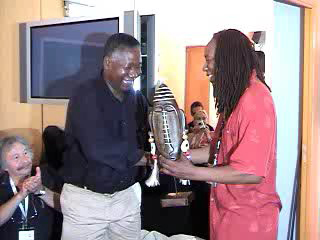 The Caribbean film commissioners from Jamaica, Trinidad and Tobago, headed by Tony CoCo-Viloin (Guadeloupefilm@cr-Guadeloupe.fr) and Jean Michel Gibert (www.calypsorosediva.com) all met for a round table discussion about the future of the Caribbean film industry. One of the many things talked about was co-production with other countries and better distribution of Caribbean films to other parts of the world. The Caribbean contingent hosted two parties, one featuring internationally renowned Tobagonian singer “Calypso Rose” and a humdinger of a rum punch.

Playboy again held their party at Richard Nilisson’s Villa Oxygene in the French Riviera hills, complete with champagne, pool and bunnies. Some of the money raised is going to the Playboy Foundation.

As a sidebar to film festivals, LaHitz Media followed up the Cannes International Film Festival working with the San Francisco International Film Festival and its co-directors, Kali Ray and Katerra Crossley, being an integral part of adding several films to the world premiere of acclaimed local filmmaker Kevin Epps’ “Straight Outta Hunters Point 2.”

Native San Franciscan, filmmaker, community activist, independent film advocate and founder of the LaHitz Media @ Cannes Film Series, Jacquie Taliaferro has developed numerous film panels in the academic arena and has lent his expertise to co-organize national and international film festivals. He can be reached at lahitznews@yahoo.com. This story first appeared on LaHitz Digital TV.