by The Liberator Magazine 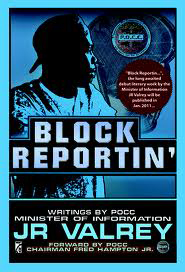 A compilation of JR Valrey’s most interesting interviews, “Block Reportin‘” is both revolutionary journalism and candid conversation. Combining straight-up questions and answers with much deeper analysis and inquiry, Valrey provides a forum for discussion in which interviewees have the same opportunity to say what they want. This is rare in a world where so much “journalism” is scripted and controlled. “Block Reportin’” is a refreshing glimpse into what journalism should be more like: real.

If you ask JR Valrey what he does, he’ll certainly tell you that he’s a journalist. But not the kind who sits and “reports” from a script, or even one who spices up the same Associated Press content used by most major news outlets. Instead, Valrey —  a contributing writer for the San Francisco Bay View and host on KPFA Pacifica Radio— dedicates himself to the platform of the Prisoners of Conscience Committee, founded by Chairman Fred Hampton Jr. As Minister of Information for the POCC, Valrey has traveled all over the world, interviewing everyone from political activists and political prisoners to congresswomen, actors and musicians.

“Block Reportin’” features interviews with Mumia Abu Jamal, Umar Bin Hasan of The Last Poets, Cynthia McKinney, Pam Africa, Paul Mooney, Delroy Lindo, “Freeway” Ricky Ross, Mos Def and a host of other interesting and influential people. More than anything else, the interviews are candid and open: Valrey introduces each interview with a reflection about the circumstances of the interview, his opinion of the interviewee and why he included the interview in the book.

One of the most poignant interviews in the book is probably Valrey’s interview with the late Gil Scott Heron. In the introduction to the interview, Valrey notes how much Heron influenced his style as a writer and identifies Heron as one of his favorite musicians. During the interview, Heron speaks honestly and openly with Valrey, explaining his own influences and describing his journey as an artist.

More importantly, though, their conversation documents the transmission of wisdom from one generation to the next. Heron teaches and explains. Valrey questions and listens. Now that Heron has transitioned, it makes interviews like these that much more valuable. Readers have the opportunity to hear Heron on his own terms and in his own voice without the stigma of his past or the dismissal of his many talents.

This story first appeared as an exclusive feature in The Liberator Magazine, an international journal dedicated to the stories and expressions of people of color.