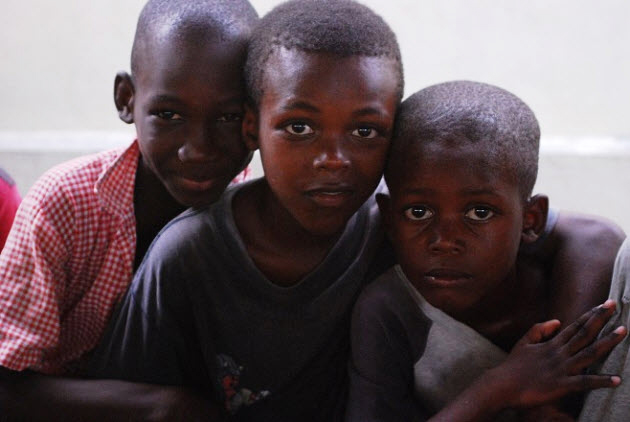 On March 18, President Jean-Bertrand Aristide and his family returned home from a seven-year forced exile in South Africa – an exile brought about by the violent U.S.-orchestrated coup in 2004. Up until the last minute, the U.S. government tried to stop the return, with President Obama going so far as to place a last-minute call to President Zuma of South Africa.

In a speech at Toussaint Louverture airport in Port-au-Prince, Aristide commented on the undemocratic elections then taking place in Haiti. He stressed the need for including all Haitians in the political process of the country, including his party, Fanmi Lavalas, the most popular in the country.

Thousands of Haiti’s poor followed his car as it moved from the airport through the streets of Port-au-Prince and towards his house. Then a roar erupted and thousands of people climbed over walls, rushed past security and engulfed the courtyard. They were exuberant, singing and chanting for hours: “Welcome back, Titid. Welcome back, schools. Welcome back, hope.” “Lavalas: We bend but do not break.”

It was a beautiful moment, made possible by years of sacrifice and effort by Haiti’s grassroots movement, aided by a determined international solidarity campaign. For those who had doubted that Aristide’s return was possible – and there were many, both within and outside of Haiti – it showed, once again, the power of the people.

Aristide’s return demonstrates Haiti’s independent will and self-determination. He brings back a deep, abiding respect for the poor of Haiti and a belief in their intelligence, their wisdom and the justice of their demands. His return challenges the racist notion that the poor of Haiti can only look to the U.S., the U.N. and the NGOs for relief and development. This is why he is loved and this is why he is feared.

For those who had doubted that Aristide’s return was possible – and there were many, both within and outside of Haiti – it showed, once again, the power of the people.

Aristide has made clear that his focus will be education. Haiti’s education system has always enforced the system of social apartheid – completely eliminating the poor while building up a small elite. During the Lavalas administrations, more schools were built in Haiti than in its entire history. Adult literacy programs – often led by women – reduced the illiteracy rate.

When the Aristide Foundation’s University (UniFA) opened a medical school in 2001, it recruited students from the poorest communities throughout Haiti, each of whom committed to return to their communities upon graduation. These were revolutionary initiatives in a country whose elite despise the poor and have worked for generations to keep them away from any form of literacy or higher education. It was no accident that U.S. and U.N. forces drove students out of the campus after the 2004 coup and turned the building into a military barracks.

Even with limited resources, Aristide’s return will generate the impetus to reopen the medical school. The Aristide Foundation’s continuing work among youth – a Youth League has begun, with over 1,000 young people meeting at the foundation a few months ago – reflects a growing mobilizing of a new generation of activists, whose dynamism will be needed in this next phase of Haiti’s development. And, given a little time, the thousands of dedicated grassroots organizers, whose work has never ceased in all these years of repression and occupation, will surely regroup and make their demands heard.

The task is daunting. Aristide returns to a colonized country. Bill Clinton has set up an Interim Recovery Commission that is now sitting on over $10 billion. USAID is pouring money into U.S.-based NGOs that pay more for staff than they do for projects.

Construction companies are lining up to bid for earthquake rubble removal contracts. Cholera – brought to Haiti by U.N. forces from Nepal – has spread throughout the country, with recent reports citing 800,000 cases. A seemingly permanent foreign MINUSTAH occupation patrols the streets, with their blue helmets and pointed guns.

As if to rub salt into the wounds, there is the new president, Michel Martelly. A kompa singer and long-time proponent of Jean-Claude Duvalier, Martelly worked with the dreaded FRAPH death squads that killed over 5,000 people in Haiti after the first coup against Aristide in 1991.

He has made the reestablishment of Haiti’s hated military a priority of his administration. In the past, he has called for a ban on “all strikes and demonstrations.” In a revolting video released right before the election, Martelly called Lavalas members “faggots” and threatened sexual violence against Aristide. Some of his chief aides had warned that “the country would burn” if he were not selected.

In the end, Martelly was selected by only 17 percent of eligible Haitian voters. With Fanmi Lavalas excluded and two right-wing candidates running, the vast majority of Haitians stayed away, refusing to lend credibility to the charade. The percentage of voters who turned out was the smallest in 60 years for any presidential election in the Americas.

Right after his election, Martelly obediently traveled to Washington, where he met with Secretary of State Hillary Clinton, who declared that the United States was with him “all the way.” He then made the rounds with officials of the World Bank, the Inter-American Development Bank and the chair of the International Monetary Fund, Dominique Strauss-Kahn, who was later arrested for attempted rape in New York. After the discussion with Strauss-Kahn, Martelly beamed and announced that “the meeting had gone well.” Of course it did. The vultures are hovering over Haiti.

Consider the recent deal brokered by Secretary of State Hillary Clinton with South Korean garment giant, Sae-A Trading Co., which will soon become Haiti’s largest private employer. Sae-A is building a 617-acre “free trade zone” near the northern city of Cap-Haitien. It plans to employ 20,000 workers and pay them only two thirds of Haiti’s minimum wage. USAID is contributing $124 million, the Inter-American Development Bank $100 million, and Sae-A will put in $78 million.

The planned industrial park will supply Wal-Mart, Target, Kohl’s and other major U.S.-based retailers. When confronted with questions over the deal – including whether the new factories will be sweatshops – Hillary Clinton dismissed all concerns, declaring, “Haiti is now open for business.”

The Sae-A project is just one part of the structural adjustment plan now being consolidated in Haiti. Known as the “death plan” in Haiti, it involves privatization, new contracts for elite import-export barons and continued limits on social investment – all combined with targeted repression of grassroots organizations.

In one particularly frank analysis, U.N. economic advisor Paul Collier highlighted the new possibilities for investment in Haiti: “Due to its poverty and relatively unregulated labor market, Haiti has labor costs that are fully competitive with China, which is the global benchmark.”

Taking note, Coca-Cola has expanded its Haiti operations, through its “Hope for Haiti” mango drink. Royal Caribbean Cruise Lines, which didn’t even have the decency to postpone its post-earthquake Haiti tours, has received funding from USAID to multiply its tourist operations in northern Haiti, training Haitians to be “hospitality workers.” And energy companies are lining up to grab contracts to dig up the country in order to exploit Haiti’s vast mineral wealth.

Yet, despite decades of repression, the popular movement in Haiti remains active and alive. Women’s organizers are right now supporting market women through low-interest micro-credit programs. Human rights workers continue to demand the release of political prisoners and expose the horrific conditions within Haiti’s prisons.

Progressive radio stations have taken great risk to denounce Martelly and the sham elections. The popular church (ti legliz) continues its work among peasants throughout the countryside. Young people have flocked to the Aristide Foundation by the thousands for education and training. And the reopening of the medical school is on the horizon.

All of this demands international solidarity. As we take a breath and celebrate Aristide’s hard-fought-for return, we know that the work continues. Hopefully, we are all ready for this next round.

Robert Roth is a co-founder of Haiti Action Committee and a board member of the Haiti Emergency Relief Fund. He was in Haiti for President Aristide’s return. A version of this article originally appeared in the Summer 2011 Newsletter of the Ecumenical Peace Institute.