A young man was shot for not having a transfer 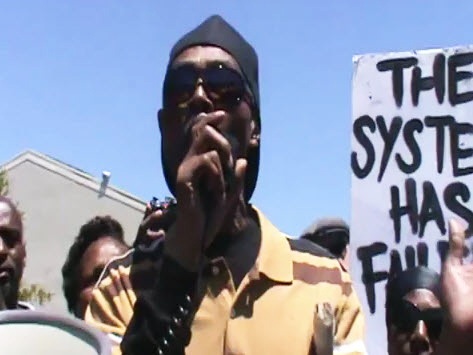 We sat together: elders, youth, workers, students and folks. We were on our way to a low-paid job, an overpriced university, a pre-gentrified home and a public school. There were laughter and shouts, murmurs and silence. Then suddenly, there were nine heavily armed police officers and fare inspectors walking through the crowded 14 Mission Muni line. One stopped in front of me and my son.

“I don’t have a transfer. I lost it,” I tentatively answered a cop who asked to see my paperwork as I clutched my son’s stroller and tried to see how close I was to the back door of the bus.

“We will have to write you a citation and you will have to step off the bus — now.” He was yelling at me and was flanked by another officer. I knew I couldn’t make a run for it, but I almost tried.

I thought of this moment when I heard about the 19-year-old man shot by the SFPD while running away from a Muni bus because he didn’t have a transfer in the Bayview July 16.

Shot and killed for not having $2 bus fare.

At a press conference held July 18 at the scene of the shooting, Joanne Abernathy from People Organized to Win Employment Rights made the point: “No one should be shot for not having enough money to ride the bus.”

For the last few years, police presence on Muni has increased — as have attacks on poor people and people of color whose only crime is not having enough money to ride the increasingly expensive so-called public transportation known as Muni. From fare inspectors working for Muni to fully armed officers, they form a terrifying mob waiting menacingly at bus stops in the Mission, Ingleside, Bayview and Tenderloin and then enter buses to harass, eject and cite anyone too poor to ride.

Even if you are a supporter of the police, you have to see the “Les Miserables”-esque insanity in this shooting.

Police culture enables, allows and encourages the use of deadly force — so much so that it seems at times as if killing can happen for any old thing. Throw in institutional racism and classism, and more and more people will not only be incarcerated but killed with impunity.

“Don’t get on the bus again if you don’t have the fare or you might be arrested,” the cop on Muni told me. He ended by giving me a citation and kicking me off the bus. He should have added “killed” to his threat of what would happen to us for riding while poor.

Tiny, also known as Lisa Gray-Garcia, is coeditor of POOR Magazine. She can be reached at deeandtiny@poormagazine.org. This story first appeared in the San Francisco Bay Guardian.