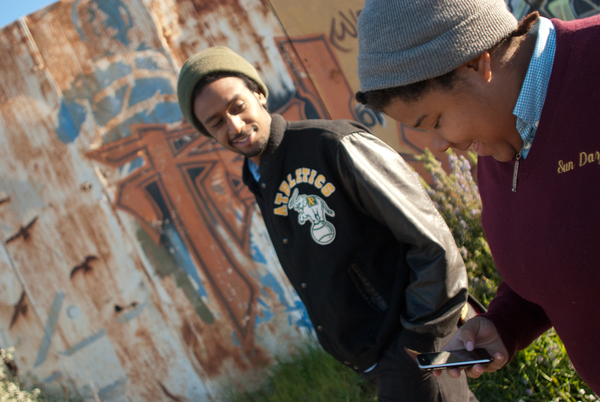 Now a new, up and coming duo known as the Newlyweds, are ready to show the world what they have to offer. Nina, the feminine aspect of the group, is the daughter of radio legend Greg Bridges of KPFA and KCSM fame and handles her craft alongside her talented partner like someone who has been trained by a professional.

Check out Ahb and Nina Saraphina, in their own words, as they expand the Oakland sound …

M.O.I. JR: What is the name of your group? How long have y’all been around? How did you meet?

Ahb: We are called the Newlyweds. Our band consists of two members, Nina Saraphina and Ahb. We have been dabbling in hip hop for years – writing rhymes and producing. We recently felt that it was time to seriously commit to the music we love, so we got married and started recording songs. Nina and I met on a cold summer day, we locked eyes and I approached her, got her number and all that jazz.

M.O.I. JR: What kind of art do you two make together?

Ahb: Rap music, hip hop – music in all of its possible avenues.

M.O.I. JR: Who are some of your inspirations?

Ahb: We find inspiration when we can’t pay rent and are a day away from being evicted, when our stomachs are grumbling and we have no money for food, when I hear a dope base line, when we see 15 police cars in a six block radius driving down International Avenue, when our girls do something that makes us question their sanity, in everything and in nothing.

M.O.I. JR: You seem to place a lot of importance on lyrical content, what makes a good song or poem to you?

Nina: A good song is something that you listen to 80 to 100 times and finally understand everything it is saying. Words that resonate, the ability to tell a story while using such tools as metaphors, similes, allusions etc.

Nina: We want to be considered two of the greats. Period.

M.O.I. JR: How can people stay online with y’all?