Alert: A ‘surge’ of additional police have been patrolling BVHP since the police shooting of Kenneth Harding, targeting outspoken residents – including Fly Benzo (Debray Carpenter), Henry Taylor and Willie Ratcliff – for arrest or harassment; report incidents at www.facebook.com/pages/San-Francisco-Bay-View-Newspaper

Welcome Kenneth Harding’s mother and family on Tuesday, July 26, 6:30 p.m., at the Center for Self Improvement, 5048 Third St. at Revere, San Francisco 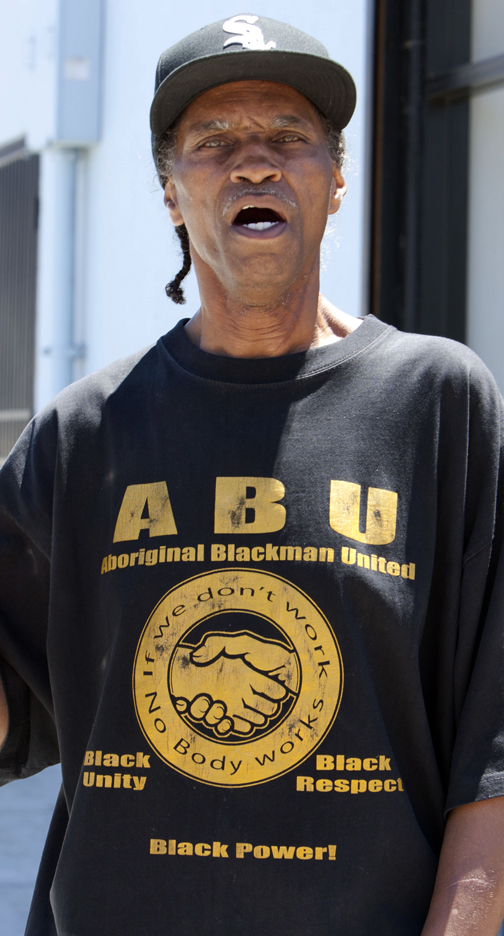 Every day, I wake up determined to create opportunity for residents of the neighborhood that I have watched inch toward decline and extermination since I became a young adult. Bayview Hunters Point is the last stand for Black San Francisco, and the events that began with last week’s police shooting on Third Street and led to [Wednesday] night’s protests at the Bayview Opera House Town Hall demonstrate why we fight so hard for a voice in the future of our community.

This is why Aboriginal Blackman United fights for jobs, why we support local community hiring, and why we believe that the challenge of empowering and sustaining our community requires a police force that is from our neighborhoods and understands the dynamics that have kept Southeast San Francisco isolated from the opportunities created in this great city.

In fact, it was my experience in 1966 as a 20-year-old young man that began my life as an activist and which forms the center of the spirit of ABU. That September, I stood in the Bayview Opera House as police bullets from Third Street ripped through the building, hitting my childhood friend, Kirk Washington, who I carried out of the Opera House as he bled onto the floor. He would survive, but 16-year-old Matthew Johnson did not. This is how the 1966 Hunters Point riots began.

I stood in the Bayview Opera House as police bullets from Third Street ripped through the building, hitting my childhood friend, Kirk Washington, who I carried out of the Opera House as he bled onto the floor. He would survive, but 16-year-old Matthew Johnson did not. This is how the 1966 Hunters Point riots began. Forty-five years later, blood has been spilled by police bullets just feet from where young Mr. Johnson died.

Forty-five years later, blood has been spilled by police bullets just feet from where young Mr. Johnson died. The circumstances are similar: A victim is villainized in the absence of a totality of fact; a community asks questions larger than the occurrence itself; an increased police presence is justified without a plan that acknowledges that though such fatalities at the hand of law enforcement may not be commonplace, reports of community-police tension are. We would ask how many of the police officers who took this life were from the Bayview Hunters Point community, but we can predict the answer.

ABU believes that the best way to stop a bullet is with a job. This is why we have asked you over a period of months to commit to funding at least 25 dedicated positions in the Department of Public Works’ pre-apprenticeship program for Bayview-Hunters Point residents, in particular because the City’s new local hiring law is just beginning to take effect with our residents just now seeing access into certain trades which have limited access to their membership in the past.

ABU believes that the best way to stop a bullet is with a job.

We therefore call upon you, Mayor Lee, to make the following series of commitments in order to begin an action plan to address the lingering issues that the past week’s events have uncovered:

1) Ensure that all participants in the recently funded San Francisco Police Academy class are San Francisco residents and that no less than half are residents of Bayview Hunters Point.

2) Establish a preference for police academy candidates that have a social work degree and require that all academy participants enroll in a San Francisco City College class on social work, in order to ensure that our law enforcement personnel are better attuned to social causes of crime and the spirit of social justice generally.

3) Immediately expand the City’s jobs program through the Department of Public Works to include at least 25 positions for residents of Bayview Hunters Point.

Never again will we allow senseless murders of our youth caused by the condition of unemployment and hopelessness in our community.

Contact James Richards and Aboriginal Blackman United (ABU) at 4744 Third St., Bayview Hunters Point, San Francisco CA 94124, (415) 574-6582 or abu.sanfrancisco@gmail.com. A copy of this letter, issued July 21, was sent to the San Francisco Board of Supervisors.