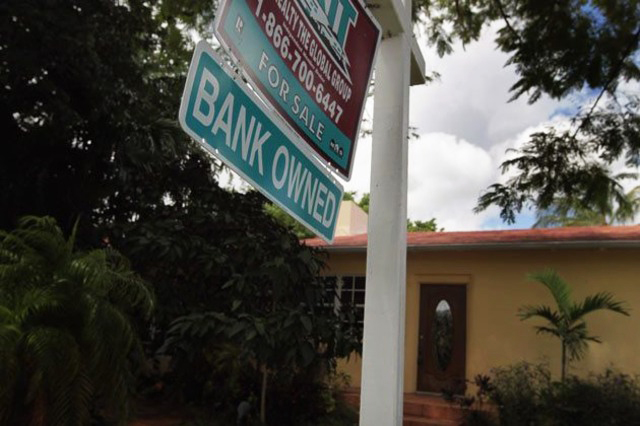 Recent news features two large and frustrating economic stories: First, Washington’s silly fight over a fake debt crisis − rather than the real debt crisis − isn’t likely to resolve itself in time to avoid a manufactured catastrophe; second, when measured by wealth, racial inequality in the U.S. is greater than it’s been since 1984. Anybody truly concerned about the country’s future solvency should be most alarmed by the latter news.

The racial wealth gap has been enormous ever since the Census Bureau began measuring it 25 years ago. But it has never been larger than today. The median wealth of a white family is now at least 20 times higher than that of a Black family and 18 times that of a Latino family, according to an analysis by the Pew Research Center.

Pew looked at wealth numbers between 2005 and the technical end of the U.S. recession in 2009. It found that the racial wealth gap exploded in that time period as Blacks and Latinos suffered dramatic blows from the collapsed housing market.

Median wealth, the net value of your assets versus your debts, fell by 66 percent among Latino households and 53 percent among Black households, while it fell just 16 percent among white households. By 2009, median Black and Latino families each held less than $7,000 in wealth; the median white family held $113,149. 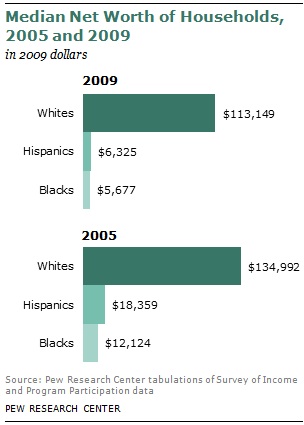 That’s a lot of numbers. But they all add up to something quite simple: When the economy struggles, those who are least secure get crushed. That’s nothing new and neither is Washington’s refusal to deal with it. With the exception of the aggressive efforts to create a white middle class following World War II, U.S. economic policy has never encouraged economic equality. What’s new today is how much economic policy actually facilitates inequality.

But that’s still more symptom than root cause. Black and Latino families are also far more likely to live in places crawling with expensive, deceptive consumer lending of all sorts, from car loans to refinance mortgages. They are more likely to turn to that lending because they make less money and because they already hold less wealth to cushion themselves in tough times.

It’s an ugly cycle: Inequality across the economy creates demand for predatory credit to bridge the gap, which in turn worsens inequality.

So things are right now growing dire in communities of color with home wealth evaporating, joblessness lingering and wages falling, people have never been more vulnerable to predation. That’s a problem for people of color, yes, but it’s also a problem for the entire economy. After all, we already know what happens when we leave huge segments of our economy open to predatory credits: subprime mortgages and global economic collapse. And with Blacks and Latinos already accounting for roughly a third of the people whose labor and spending create the economy − a share that will increase dramatically in the next generation − this sort of deep inequality is simply untenable.

Which means today’s Pew study is more of a benchmark than a final tally of the damage done in the past decade. Unless Washington intervenes to get people living-wage jobs and stop banks from preying on their wages with deceptive products, these numbers will grow more dramatic. That’s a problem for everyone.

Kai Wright is editorial director of Colorlines.com and an Alfred Knobler Fellow of The Nation Institute. His most recent book is “Drifting Toward Love: Black, Brown, Gay and Coming of Age on the Streets of New York.” Follow him on Twitter @kai_wright and check out KaiWright.com.

Blacks ‘cannot afford’ not to be counted in the 2010 Census