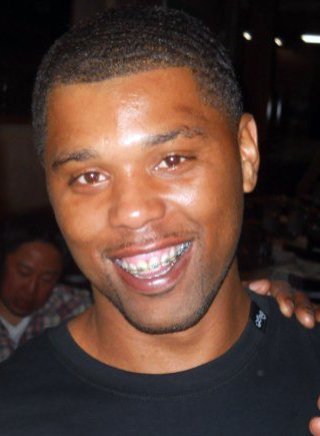 Oscar Grant’s best friend, Johntue Caldwell, 25, was shot dead in his Cadillac on July 15, 2011, a mere 30 and a half months after Oscar’s BART police assassination.

Johntue Caldwell, godfather of Oscar’s daughter, Tatiana, was one of the terrorized Black youth on the Fruitvale BART platform on Jan. 1, 2009. He leaves behind two young sons.

Young African American brother Johntue was unarmed and killed in cold blood at a Hayward gas station at around 5:35 p.m., when “someone” walked up to his car and fired several times at him. His assailant has not been identified or located yet. Hayward police Lt. Roger Keener told the Chronicle that police do not believe this was a random act.

Another young Black brother bites the dust – coincidence or cause and effect?

A year ago, Johntue had filed a $5 million federal lawsuit on the basis of his mistreatment by BART Officer Marysol Domenici, who hurled a racial slur at him and touched a taser to his face seconds before Johannes Mehserle shot an unarmed, handcuffed Oscar Grant, who lay on his stomach, pleading for his life.

That lawsuit is still pending, but the litigant is now dead.

This case is tragically reminiscent of the fate of two Bayview Hunters Point Black plaintiffs who were shot during their pending federal lawsuits against the SFPD:

1) Tyrelle Taylor, one of the kids brutalized by SFPD on Martin Luther King Jr. Day 2002 on Kiska Road in Hunters Point, was 14 years old when an officer was caught on tape telling Sue McAllister, mother of one of the brutalized children, “As long as you people are here, we will act like this!”

Tyrelle had filed a federal lawsuit against SFPD. Three years later, he was “coincidentally” re-criminalized and shot in the back five times by San Francisco police officers. Tyrelle miraculously survived the assassination attempt.

For more information, refer to the yahoogroup that the Idriss Stelley Foundation has been maintaining for young Tyrelle since the SFPD shot him.

2) Marcus Law, who was also 14, was shot dead in a drive-by shooting in 2006, three years after his brutal assault by SFPD, at the very street corner where the first assault was perpetrated against him by the racist thugs in blue.

A couple of Black youths who witnessed the shooting flagged a patrol car and cried out: “Hurry up! They shot him from a white van that drove off that way!” The officers glared at the youngsters and slowly drove in the opposite direction towards Third Street.

At the time of his death, his federal lawsuit was pending. For more information, see my article in Indybay about his murder.

A week after my only child, Idriss Stelley, became another African American victim of a SFPD assassination on June 12, 2001, my car was followed in Bayview Hunters Point by an unmarked white Lexus when I left home after 11 p.m.

It was raining heavily but I started speeding, scared out of my wits. I kept turning quickly on the deserted streets while the Lexus remained about 50 yards behind me at all times. I finally made an abrupt turn and immediately parked inside a private garage and lay down on the front seat. The stalkers did not see me, passing by me at full speed towards Third Street.

Since then, there have been two break-ins in my home office near Candlestick Park in Bayview Hunters Point, where only my hard drives were stolen. My pitbull was drugged each time.

The contents of my freezer were spread on the kitchen floor but no valuables, other electronics, cash or credit cards were missing.

One week after that first incident, Bayview reporter Ebony Colbert’s home was invaded, her dog drugged and her hard drive stolen, just days after her “Mayor Newsom doesn’t like Black people” article was published in the San Francisco Bay View.

In December 2005, my cousin Zaida Jimenez was murdered by an “intruder,” suffering one shot to the heart at close range with a silencer.

I was in my basement and did not hear the shot but heard people screaming, so I went upstairs and found Zaida dying on the kitchen floor in the arms of one of her children.

Sweet Zaida was my age, height and skin complexion.

Police alleged that gang leader, “G-Force,” who had just been released from federal prison, came to reassert his territory but “hit the wrong house.” He was conveniently killed by SFPD two days later.

I knew G-force, who we called “the king of jerry curls.” He did not match the description of the “large Black man with dreadlocks” seen running out of my house.

I confronted former Police Chief Heather Fong about this deception and she promised to keep the murder investigation open, but the killer – a trusted source who urged me to “get the fuck out of Bayview” after the murder, whose identity I must protect – is a large, female police informant who dresses like a man with a dreadlocked wig. She is still roaming the Bayview.

Since 2008, I have twice been delivered anonymous death threats at night under Idriss Stelley Foundation’s office front door: Once at our former Third Street and Palou Avenue location in Bayview Hunters Point and once at our current location, at 2940 16th St. in the Mission District.

So, is the murder of Johntue Caldwell a “gang-related crime” or a covert police assassination to shut down his pending federal lawsuit?

Johntue was a father and a son who had his life stolen from him and his dreams shattered. Pictures of young brother Johntue and messages from his grieving friends can be seen on his Facebook page.  A candlelight vigil for Jontue was hosted at 6 p.m., Friday, July 16, at the corner of West Tennyson Road and Calaroga Avenue in Hayward, Calif., where he was killed a day prior.