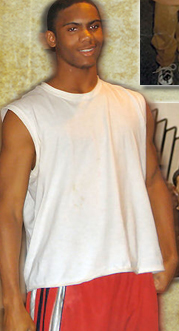 Stafford, Virginia – A Voice for Neli, a grassroots advocacy group formed to bring awareness to the plight of Reginald “Neli” Latson – an autistic teen the group contends was wrongly convicted and sentenced to serve time in a Virginia state penitentiary – is urging Gov. Bob McDonnell to pardon the youth. A press conference and rally is being held today, Aug. 15, from noon to 3 p.m. outside of the governor’s office at the Patrick Henry Building, 1111 East Broad St., Richmond, Va., to bring attention to this gross miscarriage of justice.

Latson began his day on May 24, 2010, sitting on the grass outside a local library in Stafford, Virginia. Unbeknownst to Neli, while he waited for the library to open, he was also being reported to the police by a nearby school crossing guard as “a suspicious Black male who may have a gun.” Weary of waiting, Neli left the library and was subsequently approached by a school resources officer, Deputy Thomas Calverly, who searched the teen for a gun and, having found none, asked Neli for his name.

Having voluntarily submitted to the search and perceiving that he may be being harassed, Neli refused and attempted to walk away, saying he had committed no crime. Calverly then grabbed Neli from behind and attempted to arrest him without reading him his Miranda rights or calling for backup. Neli resisted and both he and the officer were injured in the scuffle.

After a three-day trial, Neli was found guilty of assaulting a law enforcement officer, among other charges, and the jury recommended that he serve 10 1⁄2 years in prison. At the heart of Neli’s defense was the fact that he has Asperger’s Syndrome, an autism spectrum disorder that is characterized by significant difficulties in social interaction and repetitive patterns of behavior and interests.

The case has raised concerns about how law enforcement deals with the developmentally and mentally disabled. A Voice for Neli contends that Latson had committed no crime when he was accosted, searched and detained by Deputy Calverly and that he should have been free to go once the officer determined that he did not possess a gun.

Following his arrest, Neli was held without bail in isolation for 11 days at the Rappahannock Regional Jail. Police allowed Neli’s school counselor to visit and she relayed messages and information to Lisa Alexander, Neli’s mother, who was allowed only one visit during that period. According to Alexander, Neli was unable to speak or communicate with her during their brief time together. “He appeared to be in a catatonic state. It was awful,” Alexander says.

As Neli’s time in isolation dragged on, police interrogators found him nonresponsive and disturbed and a judge ordered that he be transferred to a state mental hospital for 30 days of treatment and evaluation. He was later returned to jail for one year and spent eight months of that time in tortuous isolation.

Doctors and those who are close to Neli say he is no longer the same young man. He is depressed and deteriorating, continuing to lose the functioning he had before the incident with Deputy Calverly. According to those doctors, Neli is in desperate need of a therapeutic facility, not another year of suffering in a state penitentiary that houses hardened criminals.

At Neli’s sentencing hearing, Judge Charles Sharp opted to lengthen his incarceration in spite of overwhelming evidence that Neli’s Asperger’s and poor police training contributed significantly to the events of May 24, 2010. Neli’s attorneys had presented to the judge a comprehensive fully-funded treatment plan that Neli would have been able to take advantage of immediately following the hearing. However, that treatment will now be postponed while he serves his sentence.

A Voice for Neli argues that even if Neli Latson were not autistic, his arrest on May 24, 2010, was unlawful and he never should have been jailed. According to Alexander and fellow autism advocates, it is unconscionable to treat those who are autistic and vulnerable the way Neli has been treated by the Stafford, Virginia, criminal justice system. Alexander is urging Gov. McDonnell to respond to the group’s concerns by ordering the release of her son from prison immediately.

Please support and spread the word to get a pardon for Neli Latson so that he can be released from prison and placed in a treatment facility where he can truly be helped and not continue to live in terror and isolation in the state penitentiary.

Reginald “Neli” Latson was racially profiled in May 2010 and despite being frisked and found to be clean, the police action escalated and he was arrested and convicted for defending himself against them.

Should Neli be penalized for being autistic?

After a full tortuous year of imprisonment, including months of stark and terrifying isolation, on May 31, 2011, the court demanded an ADDITIONAL year of his life, although they KNOW he is not a criminal! This nightmare must end! Is prison the place to treat autism?

Each day in prison robs Neli of his functional abilities. He is fearful, confused, bullied and traumatized. Gov. McDonnell, pardon Neli Latson and free him now!

We are calling on all supporters of Neli Latson, wrongfully convicted autistic youth, to please participate in a mass call-in/fax-in to the governor’s office and stress as many of the following points as possible:

1. Reginald “Neli” Latson, No. 1441792, Greensville Correctional Center, Jarratt, Virginia, MUST be pardoned and released into a treatment facility appropriate for his condition after which he will return to his special education program at school.

2. Neli Latson is NOT a criminal and his continued incarceration is reversing the gains made through his education and sports program. Each day in the penitentiary is causing irreparable harm to his ability to lead as normal a life as possible upon release.

3. Neli Latson has a plan for release that was presented during his May 31, 2011, hearing that was agreed upon by the court, but postponed for nine months. This postponement is cruel and unusual given his housing in solitary confinement and confusing and terror-filled days and nights in a prison cell. Neli MUST be released ASAP to begin to heal from the traumatic damage he has suffered since his wrongful arrest in May 2010!

Please tell them the state and/or country you are calling from so that they are aware that this is a nationwide and worldwide issue. If you absolutely cannot attend the rally, this is the very best way that you can support our efforts.

Neli tells the story of what happened to him the day he was arrested.

Host Ana Edwards of The Defenders interviews Lisa Alexander, a mother who shares the circumstances of her 19-year-old autistic son’s unwarranted confrontation with police in Stafford County, Virginia, that resulted in his arrest for assault and a two-year prison term in a maximum security facility. Please take a listen regarding this very critical case. Go to http://www.radio4all.net/index​.php/program/53641 and once you get to the page, press the down red arrow button and wait a few minutes for the show to load.