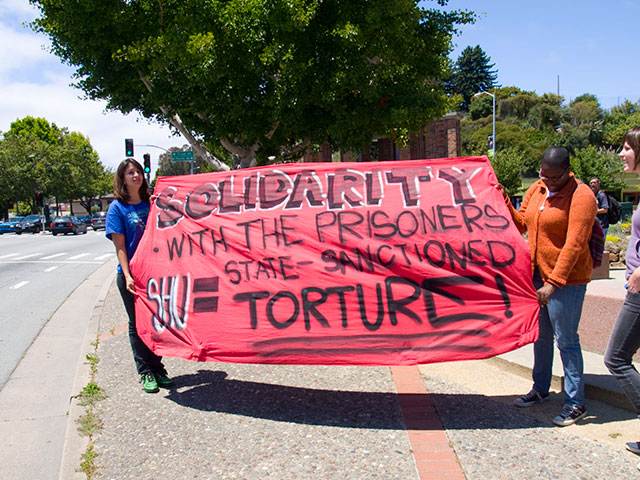 It is a sincere pleasure to once again extend my hand to my beautiful New Afrikan people. I have been recuperating from not eating for 20 days straight and I can tell you based on my personal experience that it was hell! I could feel the life gradually being sucked out of me.

It had been as cruel as I imagined it would be, but we had guys falling out every day and me and my celly lost 40 pounds. My celly is Sitawa (R.N. Dewberry), who sends his regards. He had to be shipped out to Corcoran SHU due to how frail he had gotten. He’s 6 feet 1 inch and weighed 206 pounds, and he went all the way down to 166 pounds. And I am a 6-foot-3-inch frame, weighing 250 pounds. I went down to 210 pounds.

But it was definitely a scary event because you never knew when it was your time to fall out due to starvation. I noticed if you have a fast metabolism your weight will fall off real quick, because Sitawa looked scary thin. I was worried about him.

When you love your people, you always are concerned about them. I told him to just stop moving around so much, but he’s a revolutionary. We argued about trying to save one another throughout the whole time while we both was slipping away very slowly.

Now we are trying to get our weight back up because this hunger strike is far from over. You know Sitawa is one of our four principal negotiators. He represented all of the New Afrikans held in solitary confinement throughout California.

Now we are trying to get our weight back up because this hunger strike is far from over.

Right now due to the negotiations on July 20, 2011, the hunger strike was called off temporarily because CDCR (California Department of Corrections and Rehabilitation) Undersecretary Scott Kernan and Secretary Matthew Cate begged our negotiators to call off the hunger strike and give them two to three weeks to implement our five core demands. We’re still waiting as of Aug. 7, 2011.

Then these two idiots propagate that our negotiators settled for a watch cap, proctor and calendars when many of us been held in solitary confinement on the word of a prison snitch for 10 to 40 years. And we settled for this crap? Be for real.

So our negotiators are not worried because the only thing important is what they do and say in this next negotiation. He promised all five of our demands along with progressive change. So if he came empty-handed, then it’s back to the beginning: hunger strike.

He promised all five of our demands along with progressive change. So if he came empty-handed, then it’s back to the beginning: hunger strike.

We have 500 prisoners who literally didn’t want to get off the hunger strike, but we have to be mindful that these prisoners, including ourselves, are willing to sacrifice our lives – because what other choice do we have outside of being subjected to torture for the rest of our lives?

So does it matter to us? No, because for 21 1/2 years we have been quietly held in Pelican Bay State Prison solitary confinement under some of the most horrible conditions known to man. So we continue to struggle to be treated like decent human beings.

For 21 1/2 years we have been quietly held in Pelican Bay state prison solitary confinement under some of the most horrible conditions known to man. So we continue to struggle to be treated like decent human beings.

I’ll keep you all posted because this hunger strike hasn’t even got off the ground yet!

The system cannot play us because we are going to make peaceful demonstrations in order to resist this torture, and the hunger strike is definitely a peaceful stance we can continue to exercise.

It’s been my pleasure!

One love, one struggle.

This letter was received by the Bay View on Aug. 12. Send our brother some love and light: James Crawford, D-05996, D1-117U, PBSP-SHU, P.O. Box 7500, Crescent City CA 95532. He is the writer of “The Call,” the formal announcement that alerted the world to this massive hunger strike, in which 6,600 prisoners participated, according to CDCR’s own records. As the strike was about to begin, he wrote “SHU prisoners sentenced to civil death begin hunger strike,” explaining the reasons for the strike.