Asmara, Eritrea – As the U.N. famine warning center issues urgent reports that millions of Ethiopians are once again starving in the Somali populated Ogaden, the International Committee of the Red Cross publishes a statement that the Ethiopian government has denied the Red Cross an operating permit to carry out relief work in the region. 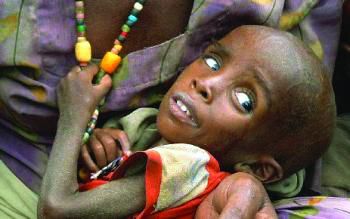 Blocking the Red Cross from relief work somewhere is almost unheard of yet, when it comes to Ethiopia – headed by the G-20 “statesman” Meles Zenawi – this is business as usual.

For the past four years all aid agencies, including the Red Cross, Doctors Without Borders and U.N. relief agencies, have been blocked by the Ethiopian military from feeding starving people in Ogadenia. There are millions of starving people, maybe as many as 6 million, though no one can say for sure because no one is allowed into the region.

Why is this? Why is there no outcry against this enormous crime against humanity: the blocking of food aid to millions of starving people?

The answer lies at the doorstep of those “humanitarian interventionists,” the Western countries and their puppets in the U.N. who pump billions of dollars a year into propping up the Meles Zenawi regime in Ethiopia. Ethiopia has for several years now surpassed Egypt as the largest recipient of cash from the West in the entire continent of Africa. While the exact amount is hidden deep inside the opaque reports gathering dust in the offices of the international financial cartels, the IMF reported that, in 2010, Ethiopia’s import bill was $8.7 billion while it exported only $1.7 billion.

Seven billion dollars a year is paid in direct cash grants, loans that are inevitably forgiven – the bulk of so-called African debt relief – or various methods involving financial chicanery. The bill has to be paid or the West knows all too well how quickly the followers of their East African henchman, Meles Zenawi, will abandon him.

If Meles Zenawi goes, who will be the Western enforcer in East Africa: the one who does the dirty work so the West can show the world how clean its hands really are?

Despite drought, famine and an increasingly brutal counterinsurgency carried out by the Ethiopian military – the largest in Africa – the people of the Ogaden are forgotten by the world, thanks in no small part to the Western media as well as the “human rights” corporations.

In one moment of desperation, I sent an email about this to a reporter for the L.A. Times based in the Ethiopian capital of Addis Ababa only to receive a reply that they could not cover this matter due to “access and logistic difficulties.” At least they can’t say they didn’t know.

Yet in all this darkness there is light, for the people of Ogadenia have been increasingly effective in armed self-defense and have begun to go on the offensive against the Ethiopian military and their local paramilitary death squads. Still, it remains far beyond the means of the several thousand fighters in the Ogaden National Liberation Front to feed millions of their people while fighting some very desperate battles against their Western armed and funded enemies in the Ethiopian military.

The Horn of Africa has been one of, if not the most, war and starvation plagued regions in the world. And these ongoing calamities can all be traced back to the Western overlords footing the bill.

The West, especially the Obama White House, may pretend ignorance of this crime, but the fact remains that a senior Obama advisor, Gayle Smith, in her pre-Obama opposition-to-George-Bush day job at the so called Enough Project, wrote about this back in 2007 and 2008.

So the powers that be know, all too well, that they are directly responsible for the forced starvation of millions, but don’t expect any action from them. The mandate of the leaders of the Western “democracies” is not to save lives – far from it; it is to protect their empire. So what does it matter if their capos in East Africa cause hundreds of thousands, maybe a million people to die of starvation?

International law is really the law of the jungle, where only the strong survive and the long-suffering people of the Ethiopian Ogaden are the latest victims. The people of the Ogaden have little choice but to fight for their lives, at least until the gangster, genocidal regime of Meles Zenawi is sent packing, with Meles fleeing to his palace in London with his ill-gotten billions.

International law is really the law of the jungle, where only the strong survive and the long-suffering people of the Ethiopian Ogaden are the latest victims.

Until then, don’t expect anything better than crocodile tears from the “humanitarian interventionists” in the West.

World Food Program in Somalia: Angel of mercy or angel of death?

The World Food Program (WFP), one of the U.N.’s biggest aid agencies, has a very nasty history in Somalia.

Back in 2006, just as Somali farmers brought their grain harvest to market, the WFP began the distribution of its entire year’s grain aid for Somalia. With thousands of tons of free grain available, Somali farmers found it almost impossible to sell their harvest and faced disaster. 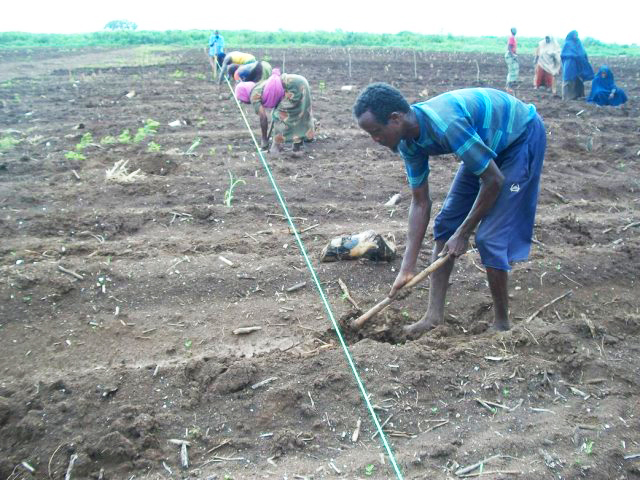 Thousands of angry Somali farmers gathered at WFP distribution centers across Somalia to protest, sometimes violently. In an attempt to calm matters, the WFP promised an investigation which in due course announced that, yes, the WFP had done the Somali farmers wrong and promised they wouldn’t do it again.

Then in 2007, just as the Somali grain harvest began to arrive in local markets, the WFP once again distributed its entire years’ grain aid, only this time with the Ethiopian army there to protect it. With a four-year-long on and off again drought since afflicting most of Somalia you could say the WFP helped put the nail in the coffin of Somali agriculture.

Small wonder then why the Somali resistance, “The Youth,” Al Shabab, has since kicked the WFP out of most of the southern Somalia that they control. It was only a couple of months ago that the WFP had cut the minimum survival food rations for the 1 million or more Somali refugees it had been feeding by 70 percent due to a “funding shortfall.” Yet today, they would have us believe that they are desperately concerned for the survival of the Somali people suffering from the drought?

The WFP is one of the very few aid agencies allowed to operate in the Ogaden next door to Somalia in Ethiopia. They run a few “show case” distribution centers and have provided little or no aid for four years to over 90 percent of the Ogaden suffering from the “The Great Horn of Africa Drought” – the worst in 60 years.

This is also the area where the Ethiopian government is fighting a decade-long counterinsurgency against the Ogaden National Liberation Front (ONLF). The WFP’s cooperation in withholding food aid from the areas where the guerilla fighters operate is part of a classic counterinsurgency strategy, “If you can’t catch the fish, drain the lake.”

A couple of months ago, a WFP team in the Ogaden was returning to their base and made the mistake of taking a shortcut off of the Ethiopian approved travel routes and came across an Ethiopian paramilitary unit carrying out their everyday practice of burning, looting, murder and mayhem in a village accused of being supporters of the ONLF.

Apparently, they tried to turn around, but it was too late and the Ethiopian death squad opened fire, killing some of the WFP team and wounding the others. The wounded were trucked off to the local Ethiopian garrison town and thrown into the prison there.

Almost at once, the Ethiopians announced that ONLF “terrorists” had “ambushed” the WFP team, “murdered” some, taken the rest “hostage” and that the Ethiopian military was in hot pursuit.

Two days later, the ONLF launched an attack on the military base and prison holding the WFP captives and freed them and the other political prisoners detained there.

The Ethiopian military immediately brought in helicopter gunships to pursue the ONLF and the freed prisoners but were unsuccessful and the WFP staff managed to make it to safety.

The ONLF subsequently delivered the freed hostages to the WFP expecting the truth of the incident to be told and the real criminals to be exposed.

To this day, the WFP has remained silent about the details of the incident and has not condemned the murder of their staff by the Ethiopian paramilitary death squads. The freed staff families live in areas controlled by the Ethiopians.

To the many who have witnessed burnt villages and slaughtered families, keep your mouth shut or your loved ones will meet the same fate. How would the world even know if you spoke out and your family was murdered? The Red Cross, Doctors Without Borders and just about all the other aid agencies besides the WFP having been kicked out of the Ogaden. End of story.

While some 10 million Somalis living in the Ogaden in Ethiopia are the victims of a drought and food aid blockade, the WFP remains silent – complicit in genocide.

World Food Program: Angel of mercy or angel of death? You be the judge.

Thomas C. Mountain is the only independent Western journalist in the Horn of Africa, living and reporting from Eritrea since 2006. He can be reached at thomascmountain@yahoo.com.