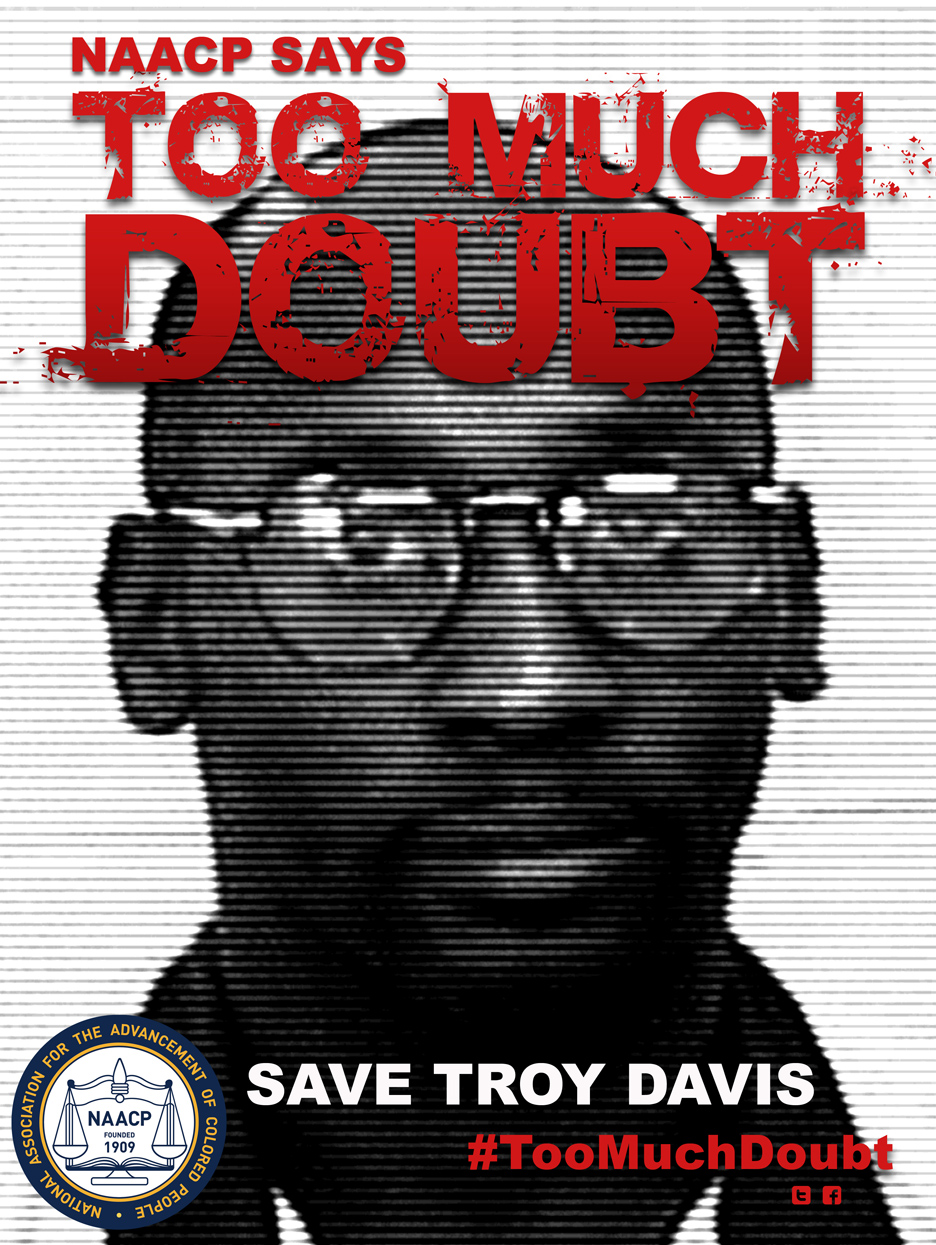 Look below under How you can help for events near you and more ways we can stop the execution of Troy Davis, now set for Wednesday, Sept. 21

Yesterday, the NAACP and other organizations advocating freedom for Troy Davis delivered more than 660,000 petition signatures to the Georgia Board of Pardons and Paroles in support of halting Troy’s execution and granting him clemency. It was a powerful moment for those who took part, and one that we hope will have a profound impact on the members of the board when they meet to decide Troy’s fate on Monday.

‘I am Troy Davis’ by Jasiri X

In this new video, “I am Troy Davis,” Jasiri X sheds light on the case of Troy Davis. The state of Georgia plans to execute Troy Davis on Wednesday, Sept. 21. There is still serious doubt as to Troy Davis’ guilt, and by putting him to death Georgia runs the risk of killing an innocent man. The fact is, no physical evidence connected Davis to the murder. Seven of the original nine witnesses have recanted, with many saying their testimony was a result of law enforcement pressure. Of the remaining witnesses, one is highly suspect and the other could be the actual culprit in the officer’s murder. Now, despite these and other facts, the state of Georgia has taken the final steps toward Davis’ execution – and only the Georgia Board of Pardons and Parole stands between Davis and the lethal injection chamber. Call or fax the board today and join a demonstration near you (see below): Georgia Board of Parsons and Parole, phone (404) 656-5651, fax (404) 651-8502.

I received your letter. However they took all of my mail, address book and the only property I have is my eyeglasses. I’m writing with the filter of a pen because I’m not allowed the entire pen. With all these security rules they only allowed me to write down your address. I don’t remember everything you said in your letter but I wanted to thank you, your family and CEDP for everything.

It is time for action so please encourage everyone to reach out to politicians, ministers and grassroots organizations to contact the Georgia Board of Pardons and Parole and the governor to grant me relief and stop this scheduled execution.

Get involved in this movement to put an end to the death penalty. Come to Georgia and take a stand for Justice. Let them know I’m blessed and my faith in God is stronger than ever. Now we have a chance to join together and be heard loud and clear that Georgia needs to stop this execution of an innocent man and end the death penalty altogether.

Excuse my writing but it’s hard using the funnel only.

God bless you and keep up the great work you’re doing.

Forwarded by Marlene Martin, Campaign to End the Death Penalty (CEDP). For more information on Troy Davis and on the Global Day of Action, go to www.nodeathpenalty.org.

All out for Troy Davis

After many long years of fighting, we are now down to the last few days to save the life of Georgia death row prisoner Troy Davis, who is scheduled to be executed on Sept. 21. These nail-biting moments are all that is left to try to convince three of the five members of the Georgia Board of Pardons and Paroles to grant clemency for Troy, who has run out of his legal appeals.

If the board does grant clemency, Troy will receive either a life sentence or life without the possibility of parole sentence. This “good” outcome has its own cruelties that we will continue to fight against as soon as we win it – but first we have to win it! 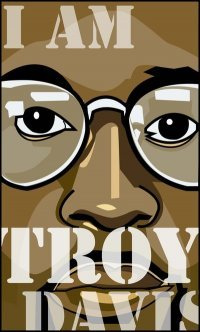 The way the system works in Georgia is that the parole board makes decisions on clemency, not the governor – while he appoints the members of the parole board, the governor has no clemency authorization and can’t override the board’s decisions. President Barack Obama doesn’t have powers here either – he can’t grant a pardon in a state criminal case. Of course, if he were to weigh in with vocal support for Troy, that would have a tremendous impact. But Troy’s supporters fear that isn’t likely.

We don’t know how this struggle will go, but as Darby Tillis, a former death row prisoner from Illinois, told me yesterday, “We must continue to be strong, remain vigilant and fight to the bitter end.”

A strong show of support for Troy, both for the Global Day of Action, called for Sept. 16 in Atlanta and other cities around the world, and for the vigil outside the clemency hearing on Sept. 19, will be extremely important. These could be the very things that tip the balance.

So far, the response to this threat to Troy’s life has been amazing. By all accounts, there will be thousands of people marching in the streets of Atlanta for Troy on Sept. 16 and then attending a rally afterward in the famous Ebenezer Baptist Church, the church where Martin Luther King Jr. was a pastor.

Rev. Jesse Jackson will make the trip down to Atlanta with his son; Troy’s family will be attending; former prisoners will be there, including Lawrence Hayes, Darby Tillis and Mark Clements of the campaign; and so will members of Amnesty International, the NAACP (which says 2,500 of its members will march) and many other social justice and campus groups. A contingent of Campaign to End the Death Penalty activists will travel to Atlanta to march, too.

Banner drops in support of Troy will take place on college campuses in the lead-up to the march, as well as continuous petitioning and flyering in Georgia and around the country to get the word out to everyone to come out and show their support for Troy on Sept. 16.

The other day, I called Troy’s sister, Martina Correia, hoping to get a few words with her. Martina has been the heart and soul of the struggle to save Troy over many years, even while she was suffering terribly with breast cancer.

When I called, her son answered the phone and explained that she was too ill to talk – that she was, in fact, on her way back into the hospital. I asked him to pass a message of love and support along to Martina and assure her we were doing all we could to mobilize people to defend Troy.

Her son then told me he had the phone on speaker, and I heard Martina say in a weak voice, “Hello Marlene – thank you.” I burst into tears hearing her voice. This strong woman is the reason the struggle for Troy is as big as it is – because of her tireless work for years on end, speaking at meetings large and small and traveling every week to visit Troy. Her brother has been on death row for 19 years – do the math, that’s a lot of visits, and death row is hours away from her home.

I thought about how Martina was always ready to speak to anyone and tell the truth about Troy. She always answered her phone, even one time she did so with laryngitis. Even now, she was making sure her son was taking the calls.

I thought about Martina’s son, who is now in college – what he has had to go through seeing his mother going back in the hospital, being too sick to visit her brother, and having to deal with the threat of the execution of his cherished uncle Troy.

But when Martina heard me, she had nothing but determination in her weak voice, telling me I shouldn’t cry and that everything was good.

Someone who visited Troy recently said he was in good spirits and thankful for everything everyone was doing for him – and that he urged everyone to keep up the pressure. But Troy had one weak moment, and that’s when he spoke about his sister Martina – that’s when the tears came to his eyes.

As Darby Tillis told me, “This man has faced three previous execution dates. Three times he has been through this torture – they just can’t kill him.”

But we know they can. If Martina and all the people who rallied for Troy, whether in the courtroom or in the streets, had not been steadfast in standing for him over these years, he would already be dead.

Now we all have to step up and do what we can – to stand up for Troy, to be Martina’s legs, and to demand clemency and an end to the death penalty.

ALL OUT FOR TROY!

Marlene Martin is national director of the Campaign to End the Death Penalty. To learn more, go to www.nodeathpenalty.org.

What they say: a message of support from California’s death row to Troy Davis

Yet, it is these trustworthy people, these justice-seeking people, these civilized, evolved and enlightened people who have in the past and in the present committed some of the most barbaric and horrific crimes against humanity that this world has ever known.

In truth, there can be no doubt that these people are untrustworthy, they are unjust, they are not civilized nor have they evolved or become more enlightened. They aren’t good, and in many cases they act inhuman. These so-called good people do more things of an evil nature than the people who they claim they are better than!

I have to believe, if not stopped they will continue to commit these crimes against humanity in the future, just as they have always done. Our world history is full of people who have been unjustly executed by people and by governments, and on Sept. 21, 2011, Mr. Troy Davis may be the next human being to suffer this fate.

We must stand together as a people to oppose this torture and murder of our fellow human being. Who will it be next? You? Me? Everyone but the rich and powerful have their lives at stake in this unjust and broken legal system that continues to kill poor people no matter what.

End the death penalty and all that it represents!

How you can help stop the execution of Troy Davis

This date was chosen because the following Monday, the Georgia Board of Pardons and Paroles will hold Troy’s final clemency hearing – our final chance to prevent Troy Davis from being executed. All Troy’s supporters need you there. Troy needs you there. To find the event nearest you – hundreds are scheduled around the world – go to Amnesty International.

The outpouring of support you’ve shown for Troy Davis so far has been phenomenal – more than 660,000 of you have signed the petition for clemency and nearly 500 events have popped up in small towns and big cities alike all over the United States. Supporters from the U.K., France, Denmark, Brazil, Hong Kong, Australia and other countries have also joined in to lend their voices.

Innocence matters. Justice matters to everyone. Act now. To make the biggest impact, we all need to join together.