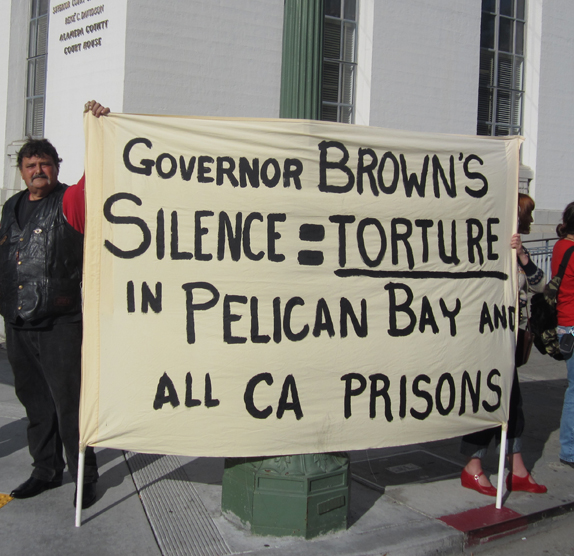 Today, Sept. 28, lawyers and mediators with Prisoner Hunger Strike Solidarity’s mediation team confirm that at least 6,000 prisoners throughout California are resuming the hunger strike that began in July. The CDCR refuses to release the specifics: where prisoners are striking exactly and how many prisoners are striking at each prison.

Prisoners at West Valley Detention Center in San Bernardino County are refusing state-issued food in solidarity with SHU-status hunger strikers across the state as well. West Valley prides itself as being one of the largest county jails in California. The majority of people locked up at West Valley are pre-trial prisoners. 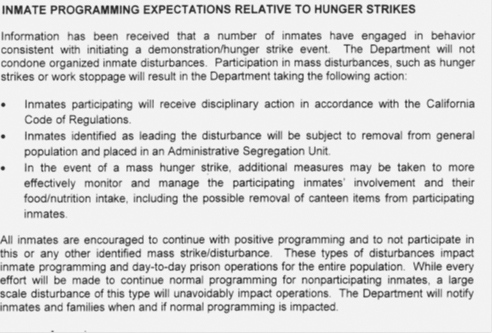 In a Sept. 27 memo signed by Deputy Director Scott Kernan, the CDCR has threatened disciplinary action against any prisoners taking part in the strike as well as placement in Ad-Seg and the removal of canteen items. The CDCR recently stated that it had sufficiently addressed the prisoners’ demands and that any future hunger strikes would not be treated in the same fashion as the July strike, which lasted for nearly four weeks.

The prisoners maintain that while some privileges have been approved, such as sweat pants, colored pencils and proctored exams, the CDCR has yet to move on the demands related to solitary confinement and gang validation. “Though promises were made at the end of the last hunger strike, and some progress has been made, it is painfully slow for people who have lived under conditions of torture for years and often decades in California’s prison system,” says Laura Magnani, a member of the prisoners’ mediation team and a representative of the American Friends Service Committee.

“While the Department of Corrections and Rehabilitation tries to paint the prisoners as nothing more than ‘dangerous gang members,’ we see this strike as a courageous effort to work across all cultural and ethnic divisions through time honored non-violent actions.”

Many of the prisoners have stated that they intend to continue their hunger strike until all of their demands are met, despite the possibility that they might suffer serious health consequences or death. Reports from the July hunger strike indicated that many of the strikers lost 20-30 pounds and experienced dizziness, fainting and heart arrhythmia.

From security housing units to county jails, conditions of imprisonment in California are horrendous, ridden with medical neglect and overcrowding as condemned by the U.S. Supreme Court in the May ruling that found the CDCR to be in violation of the Eighth Amendment’s prohibition against cruel and unusual punishment. The expansion of the strike demonstrates that CDCR’s atrocious practices and brutal conditions are in fact a system-wide issue and endemic of the CDCR.

Support the prisoners in winning their demands! Call Gov. Jerry Brown and urge him to make the CDCR comply with the prisoners’ demands!