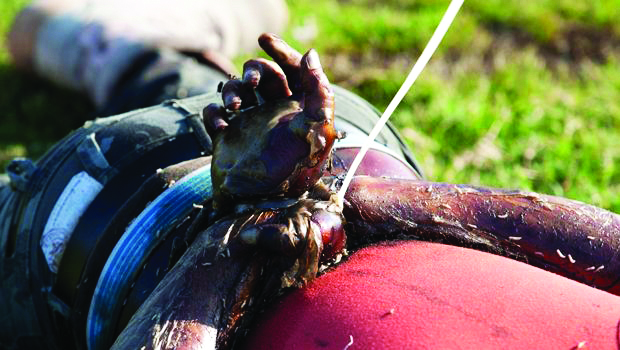 So now in addition to Afghanistan and Iraq, we have Libya, thanks to U.S. President and Nobel Peace Prize winner Barack Obama, British Prime Minister David Cameron and French President Nicholas Sarkozy.

No other three countries – and leaders – in the world could today commit the crime of abusing United Nations resolutions to wage a war of aggression against a sovereign country on a stated premise that was clearly a pretext, as unfolding events in Libya confirm.

The basis of the war of aggression is simple: To the victors belong the spoils. Indeed, in addition to the fabulous oil and natural gas riches of Libya, the victors get to write the story – the unfolding one – and tomorrow’s history.

This will be guaranteed by the downstream media – The New York Times, CNN, BBC, The Guardian, and The Wall Street Journal. Any other media interpretation of this war of aggression and conquest will be dismissed as “alternative” or “radical” perspectives, on “fringe” media outlets.

Such is the dangerous world in which we’ve lived in for some time now. George Orwell saw this decades ago: Where daytime is night, black is white, good is bad and where criminals are determined by what the downstream media say.

The excuse for the Iraq war of aggression was the hunt for weapons of mass destruction (WMD) that never existed. Meanwhile, thousands of American lives were lost on this false pretext, possibly more than 1 million Iraqi lives, unimaginable physical destruction to property was caused, and on-going destabilization of Iraq that will last for years was created.

At the end of the day, the defense offered by the George W. Bush administration was that the world rid itself of a nasty dictator who had been in power for too long. So what, if he was not involved in the 9/11 attacks? Given the opportunity and given the time, he would one day have been involved in an attack of similar magnitude on the U.S. or on U.S. interests.

There were no criminal prosecutions on the Iraq war. In retrospect, we now know why. The Obama administration wanted to preserve for itself the right and the ability to also wage a war of aggression under incredible pretext.

Change no one should believe in. Bush’s Vice President Dick Cheney must feel fully vindicated.

So, in Libya the pretext was that Resolution 1973 was needed to prevent Muammar al-Qaddafi from massacring his own people in Benghazi.

Forget the fact that the civil war had actually been launched from Benghazi and that in the initial stages the military progression was marching from East to West, Benghazi to Tripoli, and not vice versa.

Also let alone the fact that the summary executions were being committed in Benghazi – as they have also been in Tripoli by the “rebels” in recent days. The rebels’ spokespeople at The New York Times are conveniently ignoring the story, including the beheading of suspected rebel opponents, Black Libyans and migrant workers from elsewhere in Africa.

The Wall Street Journal, on June 21, 2011, reported on the ethnic cleansing of the entire Black population of Misrata by “the Brigade for Purging Slaves, Black Skin,” a story that was ignored or downplayed by other downstream media such as CNN and The New York Times.

With its wanton 24/7 bombardment, it’s also likely that NATO attacks actually claimed the lives of more Libyan civilians than al-Qaddafi’s armed forces did during the six months so far of this war.

In any event, arguing over Resolution 1973 is now meaningless, since events have revealed the Western countries’ true intentions over Libya.

It was no mere civil war: NATO, especially British and French forces, were and are fully engaged in war against al-Qaddafi’s army. In the beginning there was some nonsense talk that NATO would strike against both combatant sides when each side committed abuses against civilians. When was the first or the last time that NATO struck against “rebels”? The so-called rebels in fact include special force soldiers from Qatar and British and French commandos.

The United Nations also passed Resolution 1970 barring the supplying of arms to Libya. It was France that violated that resolution by dropping weapons in Western Libya to arm fighters brought in from Benghazi, through Tunisia, and from Qatar. Who will impose sanctions against the conquerors?

Meanwhile, the African Union’s peace proposal was completely rejected. The plan called for a ceasefire, creation of humanitarian corridors, a new constitution and democratic elections. Muammar al-Qaddafi actually accepted it as did Benghazi after an AU meeting in Equatorial Guinea: It was the U.S., Britain and France that rejected the proposal.

After all, when you have elections, your “side” could actually lose. Voters who vote freely can never be fully trusted, after all. The outcome of a war of aggression, pursued with superior weaponry, has a more reliable outcome – as events in Tripoli this week show.

By rejecting the AU plan, the entire African continent was publicly emasculated and humiliated by Obama, Cameron and Sarkozy. The lame excuse? There was some nonsense talk that Libya under al-Qaddafi was a major financial contributor to the African Union and investor in many African countries. The United States cuts the check for the United Nations and for NATO; by the same logic, the U.S. and NATO should not be involved in Libya.

So all along, though NATO permitted South African President Jacob Zuma to fly to Libya twice to negotiate an end to the war, all along Obama, Cameron and Sarkozy knew that the war would be pursued to the end. The AU rejection may come to its logical conclusion when the new Benghazi-controlled Libya applies for EU membership.

So, the whole world was shown that affairs of Africa are determined in Washington, London and Paris – not by the African Union. What did these African leaders really think: that their countries were actually independent? Well, now President Obama, Prime Minister Cameron and President Sarkozy have relieved the world of this pretense.

What’s more, Africa today doesn’t have, on the scene, statesmen who possess the type of intellectual and moral caliber commanded by Nelson Mandela, Julius Nyerere or Kenneth Kaunda; these men could have effectively rallied global opinion against the war of aggression on Libya.

There is no purpose in African presidents ever coming to attend the United Nations General Assembly meeting as they do here in New York every September and October. To do what? To complain about how Africa was ignored on the Libya war and how Africa has always been ignored? Then what?

Bringing a delegation to New York is costly: The monies wasted should be directed at some schools or clinics in these African countries.

Meanwhile, African countries and African people should focus on winning true independence. This can only start when many of the current rulers are swept away and replaced by elected leaders who have the interest of Africa at heart and who can defend Africa against the return of Western imperial conquest for Africa’s resources.

So welcome to the 21st century, where the recipient of a Noble Peace Prize is also champion of war of aggression, conquest and recolonization.

The audacity of arrogance.

Milton Allimadi, publisher and editor in chief of The Black Star News, New York’s leading Pan African weekly investigative newspaper, can be reached at Milton@blackstarnews.com. Allimadi has also worked for The Journal of Commerce, The Wall Street Journal, The New York Times and The City Sun.