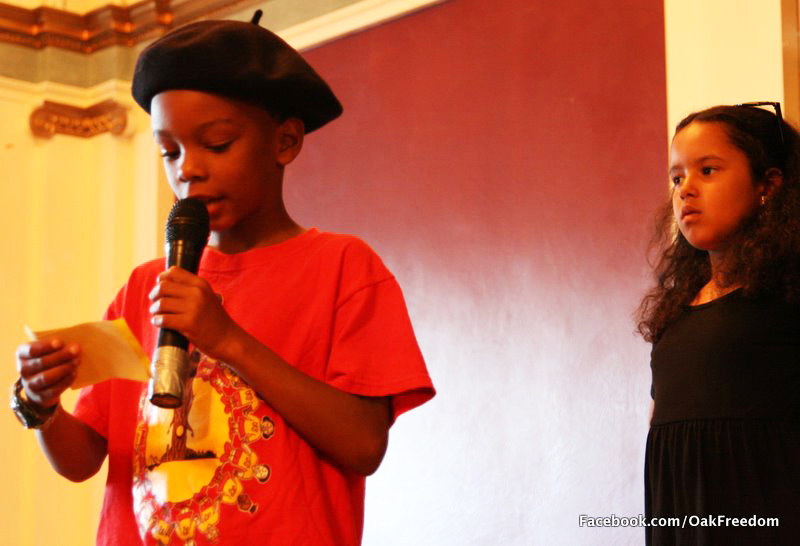 “Oakland Freedom School, how do you feel?”

So began the call-and-response at the graduation ceremony of Oakland Freedom School (OFS) held on Aug. 5 at the House of Music in downtown Oakland.

“It’s the reee-miiiix,” yells Adrianne Gillyard, program director of OFS. Students and teachers repeat the response, but this time enter into a sustained, Master P-type “uggh” as some dipped to the ground and others leaned back like Neo from “The Matrix.” Seconds later, they pop back up and the chorus ends with a grand Oakland punctuation mark: “You feel me?”

These chants, along with half a dozen others, were the bookends each day at the five-week-long literacy program that is organized each summer by Leadership Excellence. The program operated in two sites this summer: Ile Omode in East Oakland and Mt. Zion Missionary Baptist Church in West Oakland.

Students learned many things about African and African American history, ranging from the classical African civilizations of Kemet (ancient Egypt), Songhai and Mali to the Black Arts Movement and the Harlem Renaissance. The African-centered curriculum is designed to encourage youth to read during the summer while building self-esteem and a strong cultural identity.

The graduation ceremony began with libation lead by OFS teacher Duane Deterville. Libation is a ritual honoring God and our ancestors by pouring water onto a plant while speaking the names of those ancestors. The names of freedom fighters like Harriet Tubman, Ida B. Wells, Marcus Garvey and Malcolm X were said. One person called Oscar Grant.

Each classroom then presented. Children showcased cute but militant formations, using “liberation” and “revolution” instead of the directions of left and right. One spirited group led by OFS teacher Randa Powell had time to “bust a move,” breaking out into dance, then immediately returning to the basic standing formation of “freedom one,” simultaneously showcasing creativity and discipline. The groups’ “strike a pose” was also a crowd favorite.

OFS teacher Tiara Phalon’s class was transformed into the “Anansi Players.” The class, named after the spider from West African folklore, performed a dramatic interpretation of trickster Anansi while Phalon read the tale. 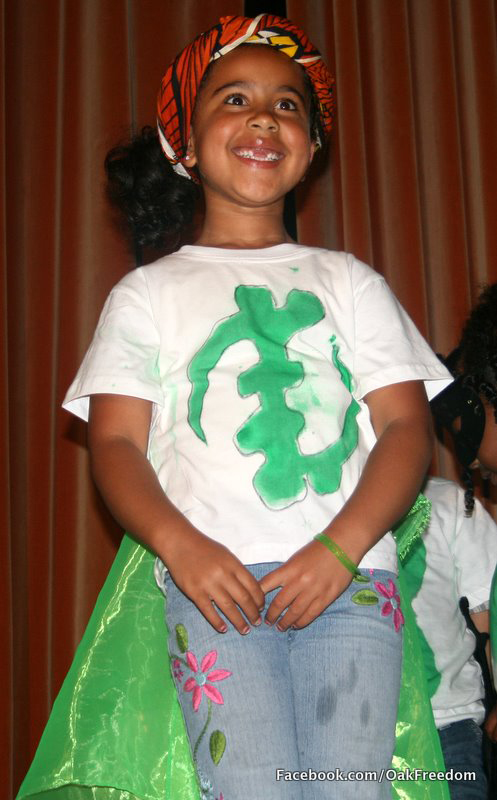 “Freedom Schools” were developed in the early 1960s to organize African people in Southern states to achieve equality. It was in 1964 that the Mississippi Freedom Schools were organized to encourage mass Black voter registration. However, freedom schools’ origins also have roots in the tradition of reconstruction era schools for freedman. Freedom Schools reemerged in 1993 and first opened in Oakland that year, according to OFS teacher Adeilei Ngeno. Leadership Excellence began its Oakland Freedom School in 1999.

Another favorite youth chant then began: “I am somebody! I won’t be stopped by nobody! I got my fist in the air and the movement in my feet. I got love for my people but it starts with me.”

After a dance performance by another group of students, Leadership Excellence founder and board chairman Dr. Shawn Ginwright provided an update on the organization.

“The organization is not doing well,” Ginwright said of the two-decades-old organization dedicated to the empowerment of African American youth. The economic crisis has threatened many of the organization’s programs. For the first time in over a decade, the organization postponed Camp Akili, a one-week summer camp that deals with root causes of violence, racism, sexism and encourages critical thinking, while still getting youth into the great outdoors.

Yet, the group remains as determined as the youth they serve. “We are in the process of seeing where we will be in the next 20 years.” Following Ginwright, Dereca Blackmon, former executive director, led a closing prayer and asked for financial support from community members present.

The program ended with a Harambee circle, similar to closing ceremonies at Kwanzaa celebrations. “Harambee” is Swahili for “pulling together.”

“It was a great graduation,” said OFS parent Jazz Hudson, whose son Nassor was one of the Anansi Players. “The program has definitely made my son more excited about reading.”

For more information about Leadership Excellence, or to donate to the organization, visit www.leadershipexcellence.org. To see more OFS photos from the summer, visit the Oakland Freedom School Facebook page (http://facebook.com/oakfreedom).