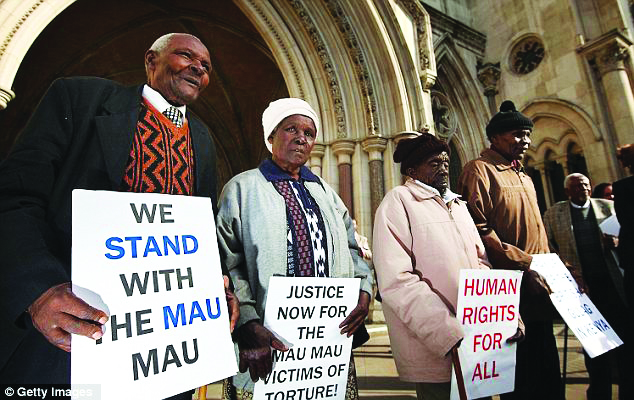 In a few weeks, a group of quiet, dignified elderly men and women will arrive in London to explain how the forces of the British state crushed their testicles or breasts with pliers. It was part of a deliberate policy of breaking a civilian population who we regarded as “baboons,” “barbarians” and “terrorists.” They will come bearing the story of how Britain invaded a country, stole its land and imprisoned an entire civilian population in detention camps – and they ask only for justice, after all this time.

As a small symbol of how we as a country have not come to terms with our history, compare the bemused reaction to the arrival of these Kenyan survivors of Britain’s gulags to the recent campaign supporting the Gurkhas. We have all waxed lyrical over the Nepalese mercenaries who were, for two centuries, hired by the British Empire to fight its least savory battles. Sometimes they were used in great causes, like the defeat of Nazism. Sometimes they were used to viciously crush democratic movements in India or Malaya or Pakistan. But they obediently did the bidding of the empire – so they are a rare bunch of foreigners who the right will turn moist over and welcome to our island.

I too strongly supported their rights to reside in Britain, out of simple humanity: If they’re good enough to die for us, they’re good enough to live with us. But isn’t it revealing that even in 2009, we can cheer the servants of empire but blank the people mutilated and murdered by it? There will be no press campaigns or celebrity endorsements for the survivors of the Kenyan suppression when they issue a reparations claim in London next month. They will be met with a bemused shrug. Yet their story tells us far more.

The British arrived in Kenya in the 1880s, at a time when our economic dominance was waning and new colonies were needed. The Colonial Office sent in waves of white settlers to seize the land from the local “apes” and mark it with the Union Jack. Francis Hall was the officer of the East India Company tasked with mounting armed raids against the Kikuyu – the most populous local tribe – to break their resistance. He said: “There is only one way of improving the [Kikuyu] and that is to wipe them out. I would only be too delighted to do so but we have to depend on them for food supplies.”

The British troops stole over 60,000 acres from the Kikuyu and renamed the area “the White Highlands.” But the white settlers were aristocratic dilettantes with little experience of farming and they were soon outraged to discover that the “primitives” were growing food far more efficiently on the reserves they had been driven into. So they forced the local Black population to work “their” land and passed a law banning the local Africans from independently growing the most profitable cash crops: tea, coffee and sisal.

The people of Kenya objected and tried to repel the invaders. They called for “ithaka na wiyathi” – land and freedom. After peaceful protests were met with violence, they formed a group, dubbed the Mau Mau, to stop the suppression any way they could. They started killing the leaders appointed by the British and some of the settlers too. As a result, the London press described them as “evil savages” and “terrorists” motivated by hatred of Christianity and civilization. They had been “brainwashed” by “Mau Mau cult leaders,” the reports shrieked.

The 1.5 million Kikuya overwhelmingly supported the Mau Mau and independence, so the British declared war on them all. A state of emergency was announced, and it began with forced removals of all Kikuyu. Anybody living outside the reserves – in any of the cities, for example – was rounded up at gunpoint, packed into lorries and sent to “transit camps.” There, they were “screened” to see if they were Mau Mau supporters. One of the people locked up this way for months was Barack Obama’s grandfather.

Professor Caroline Elkins, who studied the detention camps for five years for her remarkable book “Britain’s Gulag: The Brutal End of Empire in Kenya,” explains the tactics adopted by the British to snuffle out Mau Mau: “Electric shock was widely used, as well as cigarettes and fire,” she writes. “Bottles (often broken), gun barrels, knives, snakes, vermin and hot eggs were thrust up men’s rectums and women’s vaginas. The screening teams whipped, shot, burned and mutilated Mau Mau suspects.” 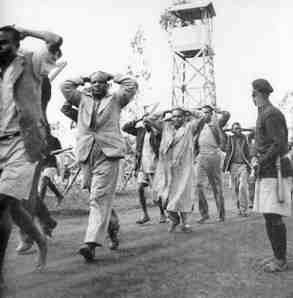 The people judged to be guilty of Mau Mau sympathies were transferred to torture camps. There, each detainee was given a number which they had to wear on a band on their wrist. They were then stripped naked and sent through a cattle dip, before the torture would begin again. “Detainees were frog-marched around the compound and beaten until blood ran from their ears,” Elkins writes.

The Kikuyu survivor Pascasio Macharia describes some of the tortures he witnessed: “The askaris [guards] brought in fire buckets full of water and the detainees were called on by one, [my friend] Peterson first. The asakaris then put his head in the bucket of water and lifted his legs high in the air so he was upside down. That’s when [one of the camp commandants] started cramming sand in Peterson’s anus and stuffed it in with a stick. The other askari would put water in and then more sand. They kept doing this back and forth … Eventually they finished with Peterson and carried him off, only to start on the next detainee in the compound.”

Another favored torment was to roll a man in barbed wire and kick him around until he bled to death. Typhoid, dysentery and lice scythed through the population. Castration was common. At least 80,000 people were locked away and tortured like this. When I reported from Kenya earlier this year, I met elderly people who still shake with fear as they talk about the gulags.

William Baldwin, a British member of the Kenya Police Reserve, wrote a memoir in which he cheerfully admits to murdering Kikuya “baboons” in cold blood. He bragged about how he gutted them with knives while other suspects watched. Another British officer, Tony Cross, proudly called their tactics “Gestapo stuff.”

For the civilians outside, life was only slightly better. Women and children were trapped in 800 “sealed villages” throughout the countryside. They were surrounded by barbed wire and armed guards, and forced at gunpoint to dig trenches that sealed them off from the world.

There was always another honorable Britain who fought against these crimes. The Labor left, especially Barbra Castle and Nye Bevan, fought for the camps to be exposed and shut. They didn’t succeed until the British imperialists were finally forced to scuttle away from the country entirely. We will never know how many people they murdered, because the colonial administration built a bonfire of all the paperwork on their way out the door. Elkins calculates it is far more than the 11,000 claimed by the British government and could be as many as 300,000.

Yet in Britain today, there is a blood-encrusted blank spot about empire. On the reality show, “The Apprentice,” the contestants recently had to pick a name for their team and they said they wanted “something that represented the best of British,” so they settled on “empire.” Nobody objected. Imagine young Germans blithely naming a team “Reich”: It’s unthinkable, because they have had to study what their fathers and grandfathers did and expunge these barbarous instincts from their national DNA.

This failure to absorb the lessons of empire is not only unjust to the victims; it leads us to repeat horrifying mistakes. Today, we are – with the Americans – using unmanned drones to bomb the Pakistan-Afghan borderland as we did a few years ago in Iraq. Nobody here seems to remember that the British invented aerial counter-insurgency in this very spot, with disastrous consequences.

In 1924, Arthur “Bomber” Harris bragged that all rebellion could be stopped with this tactic. We have shown them “what real bombing means, in casualties and damage: They know that within 45 minutes, a full-sized village can be practically wiped out and a third of its inhabitants killed,” he said. Yet instead of “pacifying” them, it radically alienated the population and lead to an uprising. If we knew our history, we would not be running the same script and expecting a different ending.

Gordon Brown said last year, in India, of all places, that “the days of Britain having to apologize for its colonial history are over.” The survivors of England’s blanked-out torture camps are entitled to ask: When did we start?

Johann Hari is a writer for the Independent of London. He has reported from the Middle East, Africa, South America and the U.S. In 2007 Amnesty International named him Newspaper Journalist of the Year. To contact him, email johann@johannhari.com, visit his website at JohannHari.com and follow him on Twitter, at www.twitter.com/johannhari101. To read his series of articles criticizing the imperialist historians Niall Ferguson and Andrew Roberts, click here, here and here. This column previously appeared in the Huffington Post.