The racial makeup of the Occupy Wall Street protests has been a curious, if not ironic fact of the movement; on the whole, ‘Occupy’ encourages openness and inclusion – but has been almost exclusively white.

If it’s up to a growing number volunteers calling themselves Occupy the Hood, that won’t be the case for much longer.

Founded by Malik Rhasaan, 39, of Queens, N.Y., and Ife Johari Uhuru, 35, based in Detroit, @OccupyTheHood has close to 3,500 followers on Twitter, the growing support of notable figures and a cadre of volunteers devoted to getting the word out about the cause of the protests to African Americans and Latinos.

Like many others, he was initially just curious about the protests.

“It was a news story and I’ve always been interested in what’s going on in our country,” Rhasaan said via phone from the protests, where a police officer had asked him to move along. “I was just going down and really just being nosy to see how honest it was. I realized there was a solid movement but that there weren’t enough Blacks and Latinos.”

He got on Facebook to ask his friends why they weren’t out getting involved.

“This really was about me and my friends starting a dialogue about what was going on,” he said. “I really never thought this would happen.”

The buzz caught the attention of Ife Johari Uhuru, who was browsing the internet at 2 a.m. from her home in Detroit. She reached out to Rhasaan on Twitter and they spoke on the phone minutes later. She offered her crack social media and internet skills to complement Rhassan’s aggressive street organizing. A partnership was born.

Ife Johari Uhuru said the onus of awareness to new communities does not fall solely on the shoulders of Occupy the Hood. “They’re gonna have a problem with people of color [getting involved] if they don’t connect effects of capitalism to racism,” she said.

“They’re gonna have a problem with people of color [getting involved] if they don’t connect effects of capitalism to racism,” said Ife Johari Uhuru.

In the meantime, Occupy the Hood says it needs volunteers. It is also working on a website.

Rhasaan has spoken with Cornel West, who gave him some insight and lauded their efforts. Occupy the Hood also received a phone call from Rep. Maxine Waters, D-Calif., Ife Johari Uhuru said.

Though he does not want to take away from the core efforts of Occupy Wall Street, Rhasaan foresees “using this as a springboard to address other things, whether it be crime or health issues in our communities. But we in the inner-city don’t know how this pertains to us. We don’t tie our issues to Wall Street.

“Maybe if we did, we’d have less time to be beefing with each other.”

To volunteer or learn more about Occupy the Hood, email them at occupythehood@gmail.com.

Darren Sands is a writer for Loop 21, where this story first appeared.

Call out to people of color 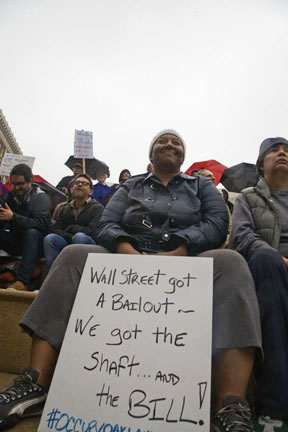 To those who want to support the occupation of Wall Street, who want to struggle for a more just and equitable society, but who feel excluded from the campaign, this is a message for you.

You are not alone. The individuals who make up the People of Color Working Group have come together because we share precisely these feelings and believe that the opportunity for consciousness-raising presented by #OccupyWallStreet is one that cannot be missed. It is time to push for the expansion and diversification of #OccupyWallStreet. If this is truly to be a movement of the 99 percent, it will need the rest of the city and the rest of the country.

Let’s be real. The economic crisis did not begin with the collapse of the Lehman Brothers in 2008. Indeed, people of color and poor people have been in a state of crisis since the founding of this country and, for indigenous communities, since before the founding of the nation. We have long known that capitalism serves only the interests of a tiny, mostly white, minority.

Black and Brown folks have long known that whenever economic troubles “necessitate” austerity measures and the people are asked to tighten their belts, we are the first to lose our jobs, our children’s schools are the first to lose funding, and our bodies are the first to be brutalized and caged. Only we can speak this truth to power. We must not miss the chance to put the needs of people of color — upon whose backs this country was built — at the forefront of this struggle.

The People of Color Working Group was formed to build a racially conscious and inclusive movement. We are reaching out to communities of color, including immigrant, undocumented and low-wage workers, prisoners, LGTBQ people of color, marginalized religious communities such as Muslims, and indigenous peoples, for whom this occupation ironically comes on top of another one and therefore must be decolonized.

We know that many individuals have responsibilities that do not allow them to participate in the occupation and that the heavy police presence at Liberty Park undoubtedly deters many. We know because we are some of these individuals. But this movement is not confined to Liberty Park: With your help, the movement will be made accessible to all.

If it is not made so, it will not succeed. By ignoring the dynamics of power and privilege, this monumental social movement risks replicating the very structures of injustice it seeks to eliminate. And so we are actively working to unite the diverse voices of all communities in order to understand exactly what is at stake, and to demand that a movement to end economic injustice must have at its core an honest struggle to end racism.

The People of Color Working Group is not meant to divide but to unite all peoples. Our hope is that we, the 99 percent, can move forward together, with a critical understanding of how the greed, corruption and inequality inherent to capitalism threatens the lives of all peoples and the Earth.

The People of Color working group was launched on Oct. 1, 2011. We can be reached by email at unified.ows@gmail.com. We can also be found online at pococcupywallstreet.tumblr.com. We meet Sundays at 3 p.m. and Wednesdays at 6:30 p.m. under the large red structure in Liberty Square.