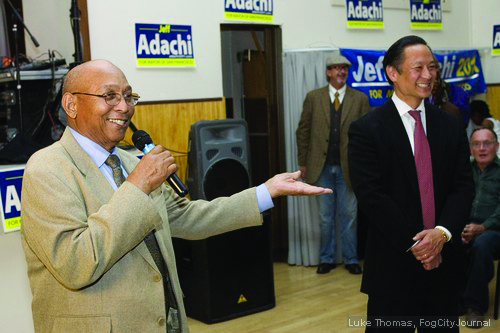 I’ve been around the Bayview long enough to know that Bayview residents want the same things that my family and I want – the very best schools for our kids, streets that are clean and safe to walk down, and jobs and careers for anyone willing to work hard to achieve their dreams.

And it seems to me – and I expect to you, too – that our city government just doesn’t get it. They seem to be interested in serving selected special interests and not in serving the people. I think I know how to change that. I think that with your help, together we can bring jobs, prosperity and a new era of effective, honest government – not only to the Bayview but to all of San Francisco.

Together we can bring jobs, prosperity and a new era of effective, honest government – not only to the Bayview but to all of San Francisco.

My vision for San Francisco is grounded in an unshakable belief that by empowering the individual, together we can secure our common goals. The top three things on my agenda are: jobs, jobs, jobs!

As mayor, my first priority will be to provide 1,000 micro-loans of up to $40,000 each to small business entrepreneurs. These small businesses will in turn create jobs and help revitalize our neighborhoods, by providing opportunities for women, people of color and any other San Franciscan who might not otherwise qualify for bank loans to start their own companies. I believe that this plan will work – particularly along the Third Street corridor – and that will in turn lead a whole new era of prosperity in Southeast San Francisco.

Now, I’m certainly not the first person to think this up – micro lending has been hailed by economists and has been demonstrated to be effective in neighborhoods around the world. But I am going to be the mayor who makes it happen in San Francisco.

As mayor, I will also focus on education. If we have any chance reversing the current trend of Latinos and African Americans leaving the Bayview, it will be because we finally bring fresh thinking to our schools. We need to make investment in our kids our first priority. I will find the money in the city’s budget to reinstate summer school for all kids and provide paid internships and jobs for all kids who want them. These are critical pathways for young people who seek to become successful by following their passion. All they need is a chance.

We need to make investment in our kids our first priority. I will find the money in the city’s budget to reinstate summer school for all kids and provide paid internships and jobs for all kids who want them.

As your Public Defender, I have already developed one of the most effective internship programs in the city, which provides internships for over 200 students each year. I know I can replicate this success on a city-wide basis.

As your mayor, I am going to work hard to restore clean and safe streets to the community. I will forge a working relationship between police and community-based organizations in order to provide effective interventions for individuals involved in gangs and violence. I will also ensure that the police are accountable to the community, and that officers who commit misconduct are dealt with appropriately.

I will also ensure that the police are accountable to the community, and that officers who commit misconduct are dealt with appropriately.

These are issues which I know quite a bit about. I opened the first Clean Slate office at the Southeast Community Center to help people clear their criminal records so that they could rejoin the workforce and lead productive lives. This program grew to four satellite offices and helped over 20,000 people over its 12 year history.

I formed Bayview BMAGIC Program in 2004, an organization that has grown into one of the most vibrant collaborative organizations, meeting every month, taking on issues of concern to the community and empowering its members to make change. It has become a model of what is possible, distributing over 4,000 backpacks and school supplies to children each year, providing literacy programs and book fairs, as well as building the capacity of youth and family agencies to provide better outcomes for the children and family they serve. BMAGIC’s success led to the formation of Mo’MAGIC in the Western Addition, which has provided similar support there.

Let me tell you a bit about myself. My decision to become a candidate for mayor has its roots in my family’s struggle for justice. My grandparents and parents were interned in the Japanese-American internment camps during World War II. They lost everything and had to start anew after four years of imprisonment. They lived in poverty for many years and were only slowly able to rebuild their lives. These injustices led me to law school, a career as a Public Defender, and an elected position in city government.

You know, one tough lesson I have learned as your elected Public Defender is that the public needs to be defended against backroom deals and entrenched special interests. I have seen how money that should have been invested in schools, streets and basic support services has instead gone to fat cats with juice at City Hall.

I took on one of the most difficult issues, pension reform, because I knew that unless we solved this problem, we would continue to face devastating cuts to our schools and basic services. We need to change the current culture of backroom deals, kickbacks and political favoritism to one of pragmatic decision-making.

I took on one of the most difficult issues, pension reform, because I knew that unless we solved this problem, we would continue to face devastating cuts to our schools and basic services.

Malcolm X, one of my heroes, believed that “[o]ur objective is complete freedom, justice and equality by any means necessary.” I am asking for your support in this election so that we can reach this objective together.