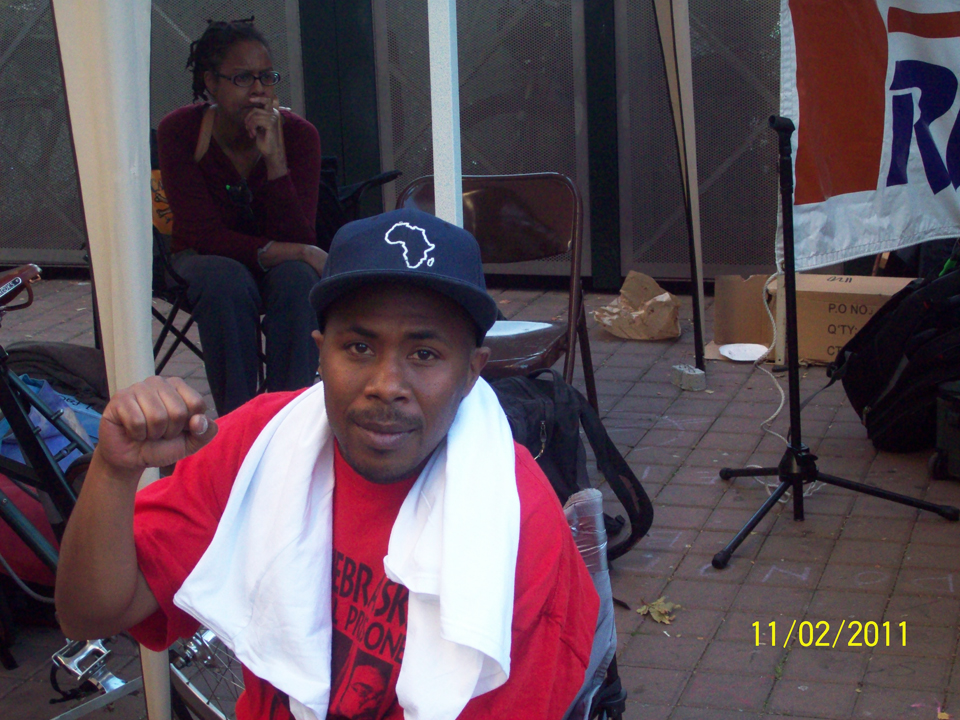 On Thursday, Nov. 10, Occupy Oakland was supposed to celebrate its one-month anniversary in the renamed Oscar Grant Plaza in front of City Hall. Instead the Occupy Movement worldwide was shaken by the cold-blooded murder of a participant less than an hour before festivities were scheduled to start. And the Occupy Movement and the news tried to cover up the fact that the victim, who was Black, was an active participant.

I got downtown at about 4:30 p.m. on a mission to teach my 7-year-old about Occupy Oakland, capitalism, the U.S. government, the working class, the poor and more. I saw myself giving her one of her first political education field trips. Instead of just talking and watching it on TV, I wanted her to experience the Occupy Movement and be able to ask questions of people who were participating, so that she can come to her own conclusions.

What we stumbled on was a rude awakening. We went to the section of the Occupy Oakland encampment by the Frank Ogawa statue to talk to the young Black campers who were collectively barbecuing, pooling their resources since the food at the camp was not sustaining them. My daughter and I hung out for about 10 minutes.

Then a fight ensued after two newcomers ran up on two of the Brothas who were actually campers at Occupy Oakland. It was soon broken up by the watching crowd.

We left after one of the newcomers yelled, “Stay right there. I’ll be right back.” We went to use the internet at the House of Music, owned by Dwayne Wiggins of Tony Toni Tone, who operates the multi-venue building a safe distance away from the melee. 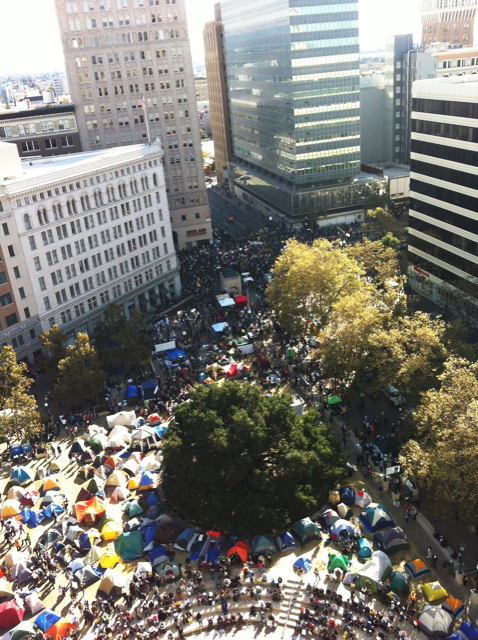 A short time later, my daughter asked me if I heard the sound of people screaming. I didn’t. Seconds later, people started running by the window of the establishment, which is a half a block away from the Occupy encampment. I peeped out of the door, and some of the young guys I was with earlier were in motion.

They slowed down only to say, “They just shot dude in the head.” I didn’t know who they were talking about exactly, but I did know they were alluding to the fight from about 15 minutes earlier. My daughter and I left the House of Music to walk to the BART, which was in the direction of the murder.

When we got closer, my daughter froze up in the middle of the street, paralyzed in fear. I talked her back into having a level head about the situation, telling her that people who panic usually don’t make the best decisions. I took her by the hand and swiftly walked to the BART station, where I listened to her feelings and answered her questions to the best of my ability.

This is what life is like at the bottom of the 99 percent, where we have to show our 7-year-old daughters how to cope in the vicinity of a fight and a murder at a place where people are demonstrating for the 99 percent in an abstract manner. I know that this is a day that my daughter will never forget. I still think it was an eye-opening experience and that I am fortunate I was with her to help see her through it.

As we got on BART on our way to a screening of the Mumia Abu Jamal documentary, “Justice on Trial,” I was thinking about what happened. The day before, I had a segment on my Morning Mix radio show where I feel we almost predicted this disaster. I asked people simply, what is the Occupy Movement about? What are its goals and objectives? Is it against capitalism or is it trying to reform capitalism?

I pointed out how the moves that Occupy Oakland demonstrated and got major accolades for were extremely symbolic and impractical, including “the general strike,” when the mayor of Oakland gave all city employees the day off, and “the shutting down of the port,” which the mayor allowed to happen by holding the police back from the gathering that lasted less than 24 hours. How do you work with the mayor to demonstrate against the city she runs? Why was the strike not extended right after the Occupiers figured out that the mayor was planning to co-opt it? Why wasn’t the port “shut down” until some demands were met?

There are a lot of questions about what is going on and what conditions created the climate for the murder, since it was in downtown in broad daylight during rush hour. Many people believe that Occupy Oakland has created a lack of safety in downtown Oakland. The Occupiers’ intentions to give away food and tents to people who want to join the camp seems noble on the surface, but if you dig deeper it is rather ignorant to think that food and temporary shelter can heal and politicize people with mental illnesses, addictions and a host of other ailments contracted from being on the bottom of the 99 percent. One of the craziest things is that there is no way to categorize and filter the people who are here to fight the power, from the people who are freeloading, from the people who need serious help before they can fight for anything. 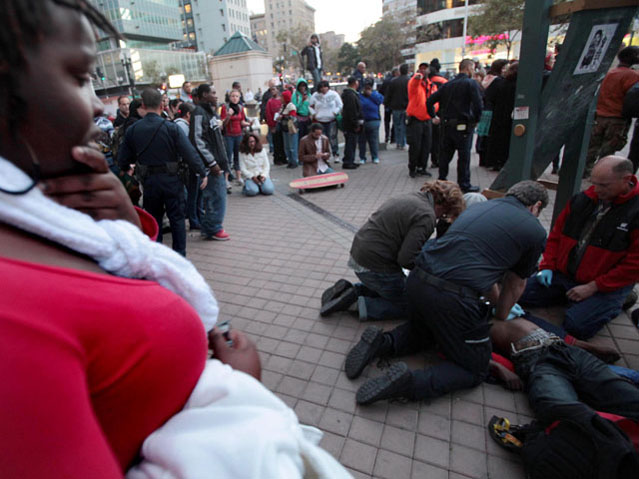 Many in the Occupy Oakland camp knew nothing of the lives of the many unemployed Black people who live downtown before they, in Christopher Columbus fashion, decided to “occupy” the area. The area was already populated, with people who have been forced by capitalism to scratch the bottom of the barrel with their knuckles to survive. Many of the white kids who make up the dominant force in the Occupy Movement in general and Occupy Oakland specifically have never even met the type of poverty that exists on the regular out there. They can’t even relate to these people, and in most cases these activists have stopped trying.

Some would argue, like myself, that the Occupy Movement has done nothing to mobilize and support campaigns that affect Black and Brown people directly and that are more urgent than taking your money out of a big bank and putting it in a credit union – campaigns to stop the gentrifying of our communities, to keep schools in Black and Brown neighborhoods open despite budget cuts, to end police terrorism on people besides Oscar Grant, and to resist racism in the working class. In my opinion, this is why the Occupy Movement continues to be mostly white all over the U.S. and Europe and why there is a certain nonchalance and skepticism about it in Black and Brown communities.

With that being the case and there being no active political education program to teach people on both sides about our common economic and political enemies and how to relate to each other, there is no way to create a vested interest in the 99 percent campaign, even if it was going to start to tackle practical issues. And with anarchy as the politic prevailing over the movement, which amounts to chaos, there should be no question as to why somebody could kill somebody else in the midst of monumental demonstrations. There is no hierarchy, or real security apparatus for that matter; no one has to listen to anybody. Everybody can be on their own individual hype. I’m surprised something like this murder has not happened sooner.

If the Occupy Movement is really going to become the political vehicle of the working class, as it is says it wants to be, one of the things that it has to do first is open itself up to criticism aimed at making it stronger. This is the role that progressive media should play.

As Chairman Mao of the Chinese Revolution said, “Claim no easy victories.” KPFA, the main radio station broadcasting the views of supporters, needs to reverse its position of just patting the movement on the back and use its airwaves to analyze where people want to go in a practical sense, as well as issues that need to be discussed, whether controversial or not, like the circumstances that allowed this murder to take place on the plaza a stone’s throw from the lawn that houses the encampment.