Oakland – You gotta love the stamina and fighting spirit of this young movement. 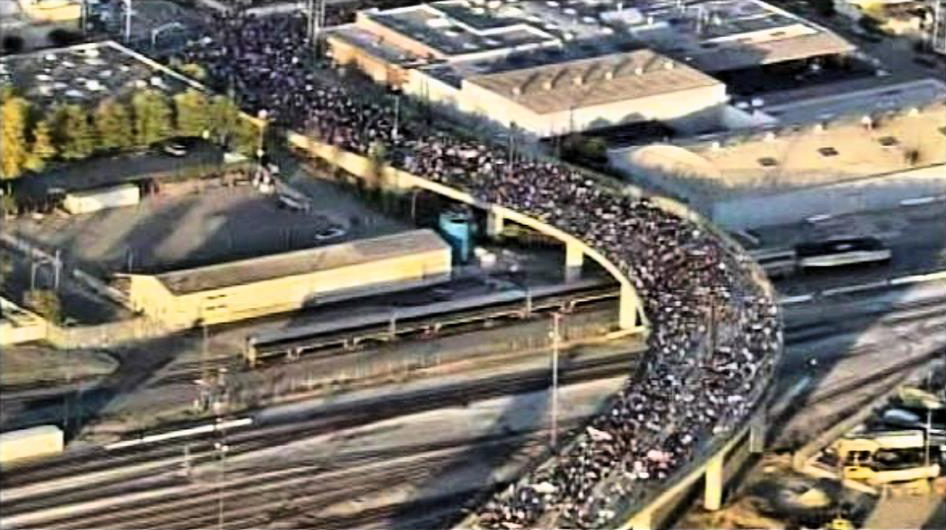 On Tuesday, Oct. 25, a pre-dawn police raid tore up and destroyed the Occupy Oakland camp. It was a war zone. Over 500 police from 17 jurisdictions took part in the paramilitary operation, arresting over 130 by day’s end, beating many and sending one Iraq War vet to the hospital in critical condition.

But the people had the last word, fighting to re-establish their liberated area. Many hundreds of militants marched for hours through the downtown war zone, thick with cops, to reclaim the streets.

By Thursday someone had torn down the police fence, and tents sprouted up again on Oscar Grant Plaza. Soon a new camp kitchen was up and running, dishing out plates of hot food. The mayor and police, stung by the ferocity of public outrage at Tuesday’s police riot, were in retreat. The initiative was once again with the people.

Every day since then, mass meetings of 1,000 to 3,000 people have packed the open-air amphitheater in front of Oakland’s City Hall – building for a one-day General Strike and Mass Day of Action on Wednesday, Nov. 2, to converge on downtown and “shut down the 1 percent.” This is a movement with legs.

The encampment began on Oct. 10, Indigenous People’s Day. I brought my sleeping bag and started camping out there about 10 days later. The large plaza was a sea of tents. There were maybe 300 people camping, with many more coming by for rallies, a bite to eat or some sharp conversation about the burning issues facing us.

There was a medical tent – with help from California Nurses Association – a child care tent, a media tent, kitchen, supply tent – and porta-potties courtesy of the Oakland teachers union, city workers union and Everett & Jones BBQ. Teamsters brought the water. Donations flowed in from a supportive community.

The big banner at the entrance said, “Oakland Commune – Oscar Grant Plaza.” and it’s true that the camp became a real community. During my four nights in the camp, African Americans made up about 30-35 percent of those who were eating and sleeping there, making the food or taking on other camp responsibilities. On Friday night musicians and dancers took over the amphitheater with some politically-charged reggae music. On Saturday it was hip-hop night. Sunday was movie night, showing the powerful film “Viva Mexico” on a big screen.

At midnight, following camp rules, the sound was turned off so people could sleep. But a lot of people weren’t ready for bed and gathered in groups around the plaza to debate everything from the U.S.-NATO assault on Libya to the attacks on migrant workers, the New Jim Crow and the prisons, or how to deal with sexism and homophobia inside the camp. It was like a People’s Free University on the streets of Oakland. You got a glimpse of what a society based on real equality might look like.

The outpouring of support following the police raid was something to behold:

• Vigil – 3,000 rallied in the amphitheater at Oscar Grant Plaza in a moving candlelight vigil for Scott Olsen, the Iraq war vet who was in the hospital with a concussion and brain injury from a police projectile. His comrades from Iraq Veterans against the War and Steve Morse, a Vietnam vet, spoke simply, powerfully about the wars overseas and the war at home that had just struck down their friend.

• General Strike – The General Assembly of Occupy Oakland, which meets at 7 p.m. every day, voted by 97 per cent to hold a General Strike and Mass Day of Action on Nov. 2 – 1,484 voted for, 46 against, with 77 abstentions. The Strike Committee meets every day at 5 p.m. A first run of 12,000 flyers is being distributed, saying: “Everyone to the streets! No work! No school! Converge on downtown Oakland.” Demands are: 1) Solidarity with the worldwide Occupy Movement; 2) End police attacks on our communities; 3) Defend Oakland schools and libraries; 4) Oppose an economic system built on inequality and corporate power that perpetuates racism, sexism and destruction of the environment.

• Blockade the Port of Oakland – On a proposal from Boots Riley, Oakland-based hip hop artist of The Coup, the Occupy Oakland strike assembly voted unanimously to march on Nov. 2 to shut down the Port of Oakland. The resolution stated: “As part of the Oakland General Strike, we will march on the Port of Oakland and shut it down. … We are doing this in order to blockade the flow of capital,” as well as show solidarity with longshore workers in their struggle against EGT in Longview Washington. EGT is a grain exporter, backed by major Wall Street interests, trying to break ILWU jurisdiction over longshore work so they can hire cheaper labor. The resolution said: “This is but one example of Wall Street’s corporate attack on workers…. The entire world is fed up with the huge disparity of wealth caused by the present system. … The Oakland General Strike is a warning shot to the 1 percent – their wealth only exists because the 99 percent creates it for them.”

• Labor support – Many unions and labor councils have condemned the police raid and endorsed the Nov.2 general strike. Without specifically calling for strike action by their members, they are nevertheless actively encouraging their members to participate in a mass shutdown of business as usual in Oakland. Union staff and members come to the plaza to take part. Rank and file members of the ILWU longshore union issued a statement titled “Defend Occupy Oakland with the muscle of organized labor,” which urges support for the General Strike. Other cities are mobilizing to support the Nov. 2 call from Oakland. One flyer in Philadelphia called on workers to strike for 99 minutes on that day – “in solidarity with the 99 percent.”

Note: The author was one of those arrested by Oakland Police during the mass bust at Oscar Grant Plaza in the wee hours on the morning of Oct. 25, 2011.

Dave Welsh, a retired postal worker and member of the San Francisco Labor Council, can be reached at sub@sonic.net. 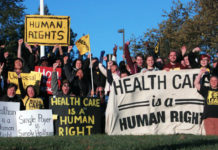 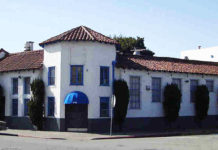