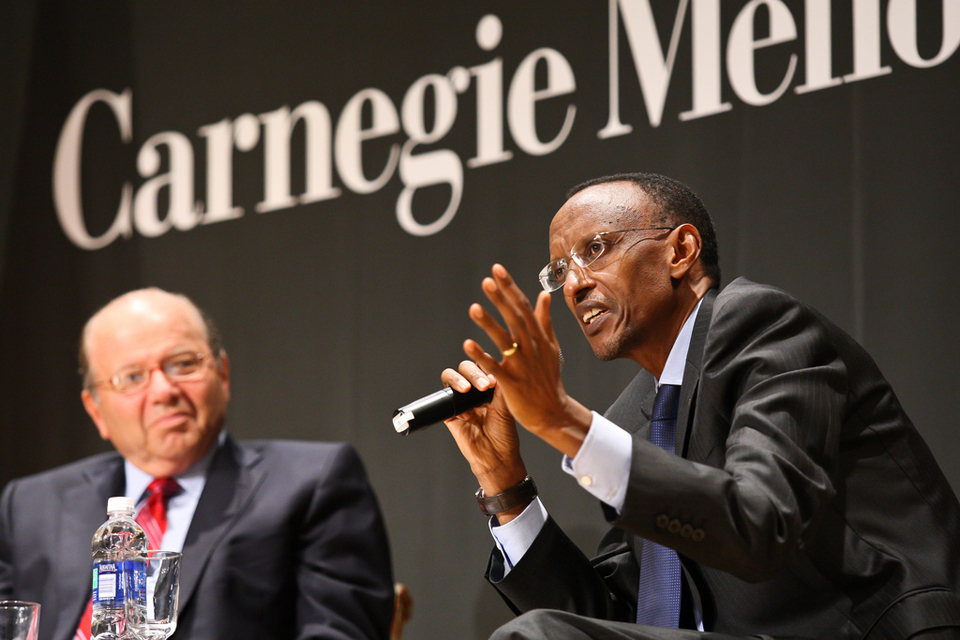 Re: Carnegie Mellon University should not collaborate with Rwandan government

The African Great Lakes Coalition would like to inform you of the meeting granted to us by Carnegie Mellon University (CMU) Vice President for Campus Affairs Michael Murphy and Associate Vice President for Government Relations Tim McNulty on Oct. 6, 2011. We discussed our grave concerns about the university’s collaboration with the Rwandan government to open a branch campus in Kigali.

We perceived our meeting as the beginning of a necessary and productive conversation about what is undoubtedly a complex situation, as many in CMU’s administration have publicly admitted. We believe that complex situations demand especially well-designed and well-informed strategies for management; to that end, we have tried to provide you with well-respected, independent sources outlining the risks of entering into a joint venture with Rwanda’s current government.

Here is a review of the major concerns we shared in our meeting:

1. The Rwandan government suppresses free speech and democracy in Rwanda.

a. Freedom House’s 2011 report gave Rwanda the status “not free” and indicated a downward trend due to “a severe crackdown on opposition politicians, journalists, and civil society activists in the run-up to a deeply flawed August 2010 presidential election.” ((http://www.freedomhouse.org/template.cfm?page=22&country=8120&year=2011))

c. According to Reporters Without Borders’ “Press Freedom Index,” Rwanda ranks 169th out of 178 countries, the third worst ranking amongst African nations. ((http://en.rsf.org/rwanda-reporters-without-borders-13-09-2011,40973.html))

d. Critics of the Rwandan government, including members of the media, have been assassinated, exiled, ((http://www.hrw.org/news/2010/08/02/rwanda-attacks-freedom-expression-freedom-association-and-freedom-assembly-run-presi)) or given decades-long jail sentences. ((http://www.bbc.co.uk/news/world-africa-12370738)) Several attempted assassinations of former Rwandan army officers and critics have been reported outside Rwanda. ((http://www.telegraph.co.uk/news/worldnews/africaandindianocean/rwanda/8784788/Third-plot-to-assassinate-Rwanda-general.html))

a. In 2009 the Commonwealth Human Rights Initiative expressed major concerns regarding Rwanda’s human rights violations prior to its induction into the Commonwealth. ((http://www.humanrightsinitiative.org/rwanda_entry_into_cw.htm))

b. Kagame’s government eliminates any sign of opposition or dissent. The opposition parties were not allowed to participate in the 2010 presidential election, which Kagame won with 93.8 percent of the vote. ((http://www.nytimes.com/2010/08/12/opinion/12thu2.html)) The White House issued a statement following the election decrying “the absence of broad political debate and open political participation.” ((http://www.whitehouse.gov/the–press–office/2010/08/13/statement–national–elections–rwanda))

c. The 2011 Ibrahim Index of African Governance ranked Rwanda 43rd out of 53 countries in the category of Human Rights and 45th in the category of Participation. ((http://www.moibrahimfoundation.org/en/media/get/20111008_Rwanda.pdf))

3. The Rwandan government is a military aggressor that destabilizes the Great Lakes region.

b. Pittsburgh City Council Proclamation 2011-1897 supports legislation PL 109-456 ((http://www.govtrack.us/congress/billtext.xpd?bill=s109-2125)) for relief and security in the D.R. Congo and urges “cities, states, and companies to divest their resources from rogue and destabilizing states,” identifying Rwanda specifically as a destabilizer. ((http://pittsburgh.legistar.com/LegislationDetail.aspx?ID=925773&GUID=48473A25-125F-4846-BE8C-9DF52F79E4DE))

4. The Rwandan government has used another local institution of higher learning in Pittsburgh to advance its political agendas.

a. Beginning in 1998, La Roche College hosted 20 Rwandan students for four years of study. In 2001, half of the 14 graduating students refused to return; sources said the seven students who refused “feared persecution from the Rwandan Patriotic Front (RPF) regime.” Those who returned were “all related to senior RPF military officers and Rwandan President Paul Kagame’s family.” ((http://www.inshuti.org/laroche.htm))

The African Great Lakes Coalition urges the CMU administrators involved in this project to broaden their conversation beyond the discourse of ideas and entrepreneurship to include the political and historical complexities of the Great Lakes region; this is vital to address the human rights abuses and threats to democracy that prompted our initial expression of concern.

We believe it is fundamentally inadvisable to collaborate with the current Rwandan government, given its grave human rights violations record and overt curtailment of political freedoms in Rwanda. However, as we understand CMU intends to move forward with its plans, we request that the institution act as a committed partner to promote democratic space and respect for human rights in the region by doing the following:

1. Issue a public statement acknowledging CMU’s commitment in this partnership to supporting the values of human rights and political freedoms in the Great Lakes region. The statement should include a public commitment to partner with an independent advisory committee to address the complexities of implementing a regional campus and its programs.

2. Expand its base of expert reference beyond the U.S government to include human rights groups; work with human rights focused organizations to set up an independent advisory committee that includes civil society, media and independent organizations from Rwanda, as well as abroad, including member organizations and individuals of our coalition, with the purpose of identifying issues of human rights and democratic freedoms and supporting institutional accountability.

3. Systematically support fair admissions and democratic principles (i.e. free speech, equal access) on Rwanda’s CMU campus, ensuring that the institution does not perpetuate a power and privilege structure that has been a root cause of so much historical grief in the country.

4. Encourage dialogue and debate on CMU’s main campus, providing forums to educate students and faculty about the Great Lakes region and to discuss the Rwandan campus issue openly and thoroughly.

We understand that CMU’s mission and vision includes dedication to problem-solving; as you carry these values to your Rwandan campus, we feel confident that the resources named above will prove useful. By instituting mechanisms of transparency and accountability and issuing a public statement in support of free speech and respect for human rights, CMU will have the opportunity to demonstrate not only its commitment to problem-solving and due diligence but its good faith in this ambitious project.

Rwanda Genocide survivor: My mother and I were ordered to dig our own graves

White man’s burden: Affleck and Prendergast in Congress for Congo

Ivory Coast and Rwanda: A tale of different reactions from the international community to African elections