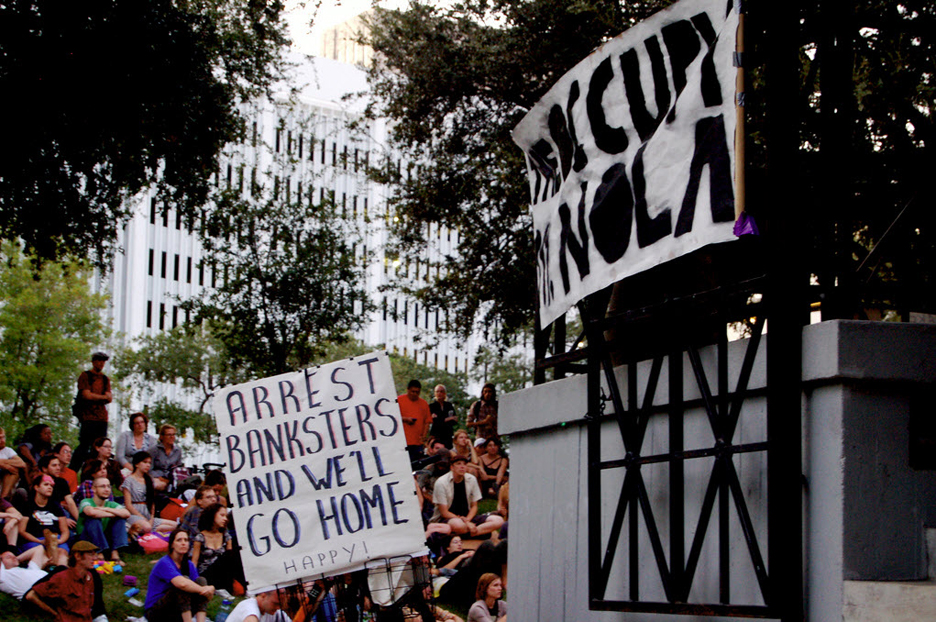 Over the past few weeks, I have been invigorated and moved by the energy surrounding Occupy Wall Street and its offshoots across the nation. Yet at the same time, I’ve been faced with the tensions being articulated by so many folks on the Left: How can this energy be connected to and further long-standing organizing work for social and economic justice?

Here at Occupy NOLA (short for New Orleans, La.), I have been excited about the potential of making these bridges through the project of the anti-racism working group. In less than two weeks, this working group has been developing a collective analysis and strategy that I think has the possibility of contributing towards long-term movement building.

From difficult moments to moments of promise

This is not to say this work has been easy. Many of these conversations are painful and difficult. At the second General Assembly (GA), a debate emerged regarding the use of the livestream at the GA. Since the initial planning meeting, Occupy NOLA had been posting photos and videos on Facebook without the permission of those in attendance. Myself alongside several others from the anti-racism working group raised the concern that having the entire area videotaped led to the space not being safe or secure for a variety of folks: immigrants, trans folks, queer folks etc. and offered the proposal that one third of the space not be included in the livestream.

In response, several white men got up and declared the purpose of the movement was to be recorded and that having folks on video couldn’t possibly have the ramifications that we had explained, such as immigration sweeps or people losing employment or housing. Listening to these responses, I was frustrated by concrete concerns being seemingly disregarded, but even more so at how privilege operates to convince individuals that their experiences within society are universal – how security for some leads to making the lack of safety for others invisible.

Privilege operates to convince individuals that their experiences within society are universal – security for some leads to making the lack of safety for others invisible.

Following the GA’s inability to reach consensus on this subject, those of us on both sides of the debate were tasked with further discussing the issue. Cynically, I found myself assuming the people we had been debating weren’t actually committed enough to the process to enter into further conversation. However, immediately after the meeting, one guy came over to continue the discussion. Within a few moments, a group of a dozen people were talking about how power functions, how Latin@ folks are racially profiled as undocumented immigrants, the policing of trans folks – especially transwomen of color – the precariousness of service industry workers’ employment and so much more. Here we were, mostly strangers, spending our Friday night standing in Duncan Plaza engaged in political debate.

Did we end up agreeing on everything? No. Did we make steps together? Yes.

Making these steps together is why I’m involved in the Occupy movement. I recalled that my political analysis was not developed overnight; rather, it took investment from other activists. I’ve had years of guidance and mentorship within movements for social justice that has gotten me to the place I am today. Now is the time to offer the constructive encouragement to others that was offered to me when I was first becoming politicized.

But I also know about the rapid politicization folks can go through during moments like this – moments that radicalize people’s understanding of power, systems of oppression, the state, global capitalism and empire. These moments can literally transform people’s understandings of not just what we are struggling against but also what we are dreaming about – what collective liberation can potentially be.

For me, this is why it’s so crucial to organize with the anti-racism working group to build a structural analysis within Occupy NOLA of how we got to this period of advanced capitalism. Luckily, I think we have more resources to draw on for this than in previous periods. Even before the first GA to plan Occupy NOLA, white anti-racist folks here were reaching out to one another to discuss how to critically engage this moment. 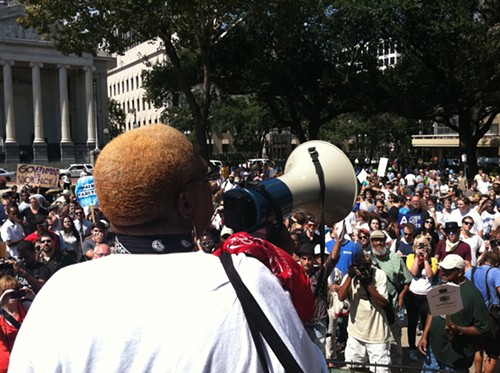 Many of us had been moved by the writing coming out of OWS by activists of color on their struggles to build an anti-racist and anti-oppressive politic in New York. Several of us were also encouraged by the conversations happening within the national U.S. for All of Us network of white anti-racists about the potential for catalyzing this moment. Others of us were calling on our knowledge gained from our participation, both as local New Orleanians and outside volunteers, in anti-racist organizing at Common Ground Relief following the storm. Looking around the space of Occupy NOLA, instead of feeling lost and overwhelmed as I have so many times before in these spaces, I felt hopeful and inspired.

By the second day of Occupy NOLA, a multiracial crew of folks had come together for the first meeting of the anti-racism working group. Gathered together was a group of people with a range of backgrounds: long-term organizers, folks new to activism, people who already knew and trusted one another, and individuals who came knowing no one but believing in the purpose of the group.

Over the course of our first meetings, we strategized together what the purpose and goals of our anti-racism working group would be. Drawing on our collective knowledge gain from previous activism as well as our initial involvement with Occupy NOLA, we solidified together that our goals are based in the belief that this is a moment of possibility and potential.

We committed to working towards Occupy NOLA being accountable to local community organizing and acting in solidarity with their local struggles, fostering an intersectional structural analysis of power through political education projects, encouraging both Occupy NOLA and the broader #Occupy movement to center both the U.S. South and the Global South, deepening our analysis of how U.S. financial power has been built off the ravages of slavery and colonialism, and continuing to build off the momentum of this moment over the next year regardless of the outcome of this occupation.

Central to our strategy has also been the ongoing dialogue and discussion with long-time New Orleans organizers of color. Folks from a range of organizations affiliated with the Greater New Orleans Organizers’ Roundtable have generously entered into conversations with the anti-racism working group about how can Occupy NOLA be pushed in a strategic direction that furthers the aims of local economic and social justice movements. This work has the potential to strengthen both Occupy NOLA and the work of already existing organizing by building a united front on the social justice issues in New Orleans.

It’s also been incredible to be organizing collectively with folks who are holding and working with the reality that we need to move quickly since we don’t know how long this occupation will last, while also thinking through how this work can make a long-term impact on movements for justice. Instead of organizing in crisis, we are organizing for the long haul.

We’re still grappling with a lot of questions: How do we actively engage and support other working groups? What are strategies for building an accountable Occupy movement here in New Orleans that supports and strengthens the long-term community organizing in the city around housing, police brutality, the prison industrial complex and immigration? Is our goal to build Occupy NOLA as a multiracial, multiclass movement or is there a benefit in leveraging the white and class privilege of the current formation in solidarity with community organizations? How do we both embrace the spirit of participatory democracy while also recognizing how these processes can be alienating?

These are complicated questions for a complicated moment. While I am sure that both the anti-racism working group and the broader Occupy NOLA will make mistakes along the way, I am just as sure of the necessity in critically engaging in this movement. We’re in the middle of a powerful opening to connect fresh new activists to radical political analysis, to develop their leadership skills, and to introduce them to the ongoing social and economic struggles here in New Orleans, across the U.S. and around the globe. Getting down in this messy process is more than just a commitment to the present Occupy moment; it’s an investment in our future movements for justice.

Lydia Pelot-Hobbs is a core member and trainer with AORTA (Anti-Oppression Resource and Training Alliance), a collective of trainers devoted to strengthening movements for social justice and a solidarity economy. Her writing has appeared in Left Turn Magazine and the Indypendent. She can be reached at lydia@aortacollective.org. She thanks Evan Casper-Futterman and Drew Christopher Joy for their feedback and guidance on this piece.