by Adrian Drummond-Cole and Darwin BondGraham 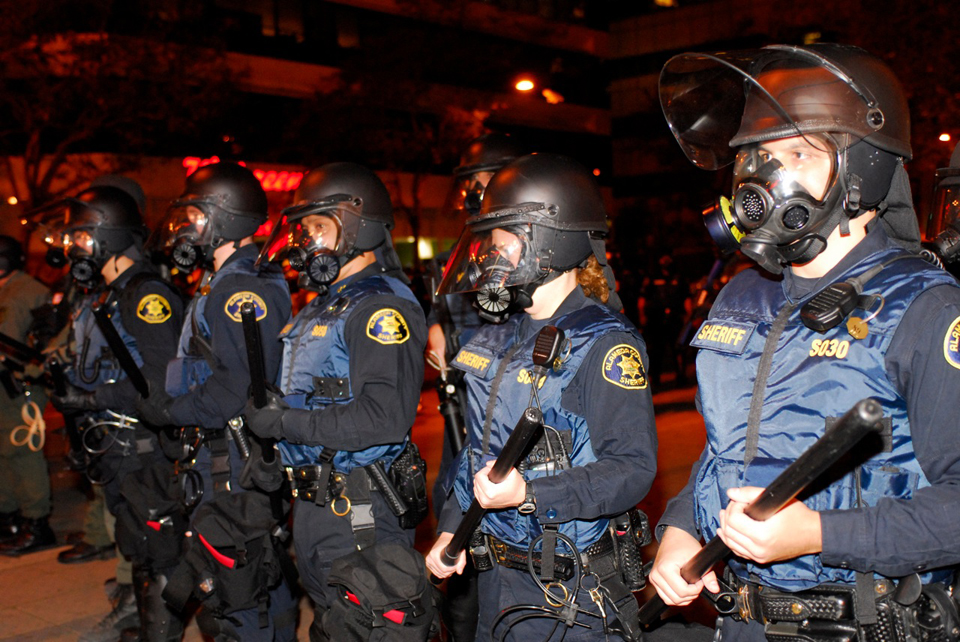 In a letter addressed to Oakland’s Mayor Jean Quan on Nov. 8, two little-known entities, the Lake Merritt/Uptown District Association (LMUDA) and Downtown Oakland Association (DOA) implored Mayor Quan to “step up and provide cohesive, common sense leadership.” Cohesive leadership, according to these two organizations, means giving the Oakland Police Department a green light to eradicate the now month-old Occupy encampment. “It’s time for Frank Ogawa Plaza to be given back to the people of Oakland,” they conclude.

Who are the LMUDA and DOA? What gives them the authority to make such demands? Further, who are the “people of Oakland” referred to in their letter? If those occupying the plaza do not constitute the people of Oakland, then who are the rightful owners of this contested public space?

The privatization of public administration

“Lake Merritt/Uptown” and “Downtown Oakland” are not community associations or neighborhood groups comprised of Oaklanders with historic roots or identity in Oakland’s larger patchwork. Rather, they are business improvement districts, or “BIDs,” an apt acronym given their focus on commodifying and privatizing government and public space. Both LMUDA and DOA were founded in 2008. BIDs are commercial districts within cities where special taxes are collected on properties for use towards activities determined by the BID’s board of directors. As hybrid public-private entities, their explicit purpose is to increase property values and rents and to cultivate other profitable opportunities in designated geographic areas.

Because they have the power to levy and spend taxes, BIDs must be formed via a petition process and then by majority vote of businesses and property owners within the chosen area and finally approved by the City Council. However, once the BID is established, it largely operates under its own discretion. It does what it wants with its money, which can involve funding events, contracting for extra sanitation and trash services, and even hiring private security to patrol public space.

The Lake Merritt/Uptown District and Downtown District are two of nine BIDs established in Oakland since 2001. The others include Fruitvale, Koreatown/Northgate, Lakeshore/Lake Park, Laurel, Montclair, Rockridge and Temescal/Telegraph Avenue.

BIDs began to emerge nationally in the 1970s as vehicles for gentrification and the militarization of urban space. Laws enabling the incorporation of these districts have spread to nearly every state, and most major U.S. cities contain multiple special districts run mostly by real estate developers and large tourism and entertainment companies, with smaller businesses – restaurants and retailers – as junior partners. BIDs especially took off in the 1990s as real estate capital focused its energy on urban zones from which it had previously divested.

BIDs are a strategic response of real estate businesses to the political backlash against the Civil Rights Movement. Because much of the public sector was de-funded through tax cuts and capital and wealth were withdrawn into newly rich suburban enclaves buoyed by white flight or into private institutions, cities found themselves tax-starved and unable to raise revenues for the public services that many place-dependent businesses once depended on. Many small urban businesses were ruined.

BIDs are a strategic response of real estate businesses to the political backlash against the Civil Rights Movement.

Rather than fighting against these racist forces of disinvestment, most remaining local business establishments instead turned to a solution provided by consultants working for large real estate companies – privately run districts with special tax powers that don’t have to share the wealth. BIDs have the “advantage” of not requiring tax increases to support services that do not directly enrich the businesses paying the tax. These funds are not shared with populations outside the BID’s geographic boundaries and need not pay for things like schools or streetlights in working class residential neighborhoods.

The LMUDA and DOA districts are administered by nonprofit management corporations under contract with the City of Oakland. Each corporation is governed by a board of directors. The acting presidents, J.C. Wallace and Deborah Boyer, are employees of San Francisco-based real estate investment and management companies SKS Investments and the Swig Company, respectively. Both have speculated on properties in Oakland and stand to profit from increased rents generated by gentrification.

Before joining SKS, J.C. Wallace was a “relationship manager” with Wells Fargo’s Real Estate Group, responsible for a $300 million portfolio. John Bruno of the Los Angeles-based CIM Group, a real estate investment firm with over $9 billion in managed assets, sits on both boards, as do members of the San Francisco-based CAC Real Estate Management Co., Inc. The board of the DOA also boasts two employees of Los Angeles-based CB Richard Ellis, the world’s largest commercial real estate services firm, which owns much property in Oakland. 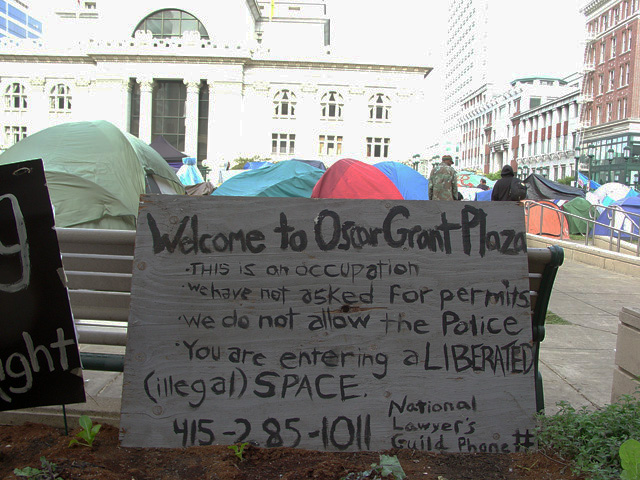 Under the BID paradigm, property owners, many of them absentee corporations – not the people of Oakland – dictate the terms of services once considered the purview of the city administration. BIDs effectively remove services from the political arena, making everything from sanitation to security privately managed.

The LMUDA, for example, can circumvent the law enforcement pensions deadlock and yearly general fund budget shortfalls affecting the city’s police force and subcontract instead with the private security company Block by Block to provide additional security personnel in the downtown area.

A subsidiary of the SMS Holdings Corp., which made Inc. magazine’s list of fastest growing private companies in 2011, Block by Block specializes in staffing BIDs. Block by Block runs BIDs in 42 U.S. cities, including Berkeley, Oakland, Pasadena, LA, West Hollywood and Santa Monica. Block by Block’s non-union, minimum wage workforce effectively reduces the costs of city services for corporations and allows these same corporations to determine who benefits from these services, while undermining better-paid, unionized city employees who would provide services to all residents under the ultimate authority of elected officials, not private corporate boards.

A small gang of primarily non-Oaklanders

In their letter to Mayor Quan, LMUDA and DOA remark that the city needs to focus on “identifying the small gang of primarily non-Oaklanders,” those they deem responsible for property destruction, vandalism and skirmishes during the police riot that followed the General Strike. Ironically, most of the leadership of both BID management corporations take their orders directly from companies based outside the city.

This small gang of corporate directors and their associated companies are equipped with the resources needed to disrupt the encampment and discredit the organizing coming from the steps of City Hall. SKS, for example, has four lobbyists registered in Oakland since February 2011. SKS has maintained a lobbying presence in Oakland for years, most recently meeting with Mayor Quan to discuss what sorts of business development activities she envisions as the new mayor.

The interests of big business have become the law of the land.

The interests of big business have become the law of the land. The fictive “people of Oakland” invoked by the LMUDA and DOA are nothing more than the personified corporations who want to turn Oakland into a gentrified metropolis devoid of any real public space.

The people of Oakland vs. the product Oakland

“Since the early 1990s, there has been an explosion in private and public efforts to revitalize older urban, street-based business districts,” explains New City America Inc., the San Diego firm that wrote the legislation to establish both the DOA and LMUDA and has spearheaded similar efforts in 61 other cities since 1995. “Historic downtown and urban neighborhood commercial corridors and urban mixed-use neighborhoods valuable for their setting for human experiences, places of social change and fond memories, are experiencing a renaissance.” But in order for this renaissance to take place, New City America advises that, “property owners … must take the first step – organizing themselves – to respond to the changes occurring in the evolution of our urban areas.”

The transition New City America and similar consultants are promoting – the neoliberal urban shift – ultimately boils down to the privatization of public space and the elimination of democratic politics from city budgeting and services. In the words of New City America:

The encampment at Frank Ogawa Plaza, now dubbed Oscar Grant Plaza, offers many alternative visions of what the people of Oakland desire for the future of their city. In the section of the Oct. 8 statement of the General Assembly addressed to the people, Occupy Oakland declared, “The purpose of our gathering here is to plan actions, to mobilize real resistance, to defend ourselves from the economic and physical war that is being waged against our communities.”

In the days to come, as speculation swirls regarding a second police raid and demolition of the encampment, the larger war rages on to determine who are the rightful people of Oakland, and whose vision will be adopted for a future as yet unwritten.

Adrian Drummond-Cole is a writer, organizer and musician who lives in Oakland. Darwin BondGraham is a sociologist and author currently visiting Occupy encampments across the U.S.; he can be reached at darwin@riseup.net. 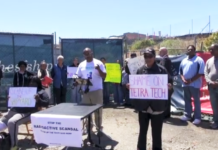