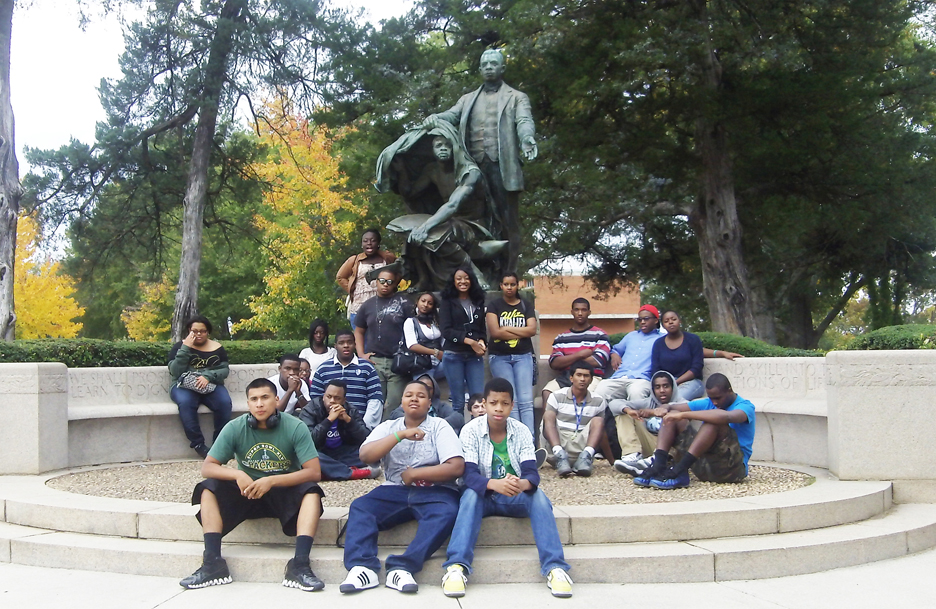 Arriving at Atlanta Hartsfield International Airport from cities throughout America, members of the Intel Computer Clubhouse Network on an HBCU tour sponsored by the Intel Foundation were excited. The tour would visit Spelman College, Morehouse College and Clark-Atlanta University in Atlanta, also Alabama State University and Tuskegee University in Alabama. The members were selected by the clubhouse coordinators based upon their attendance and participation in clubhouse projects.

The Intel Computer Clubhouse Network is an international community of 100 Computer Clubhouses located in 20 different countries around the world. The Computer Clubhouse provides a creative and safe out-of-school learning environment where young people from underserved communities work with adult mentors to explore their own ideas, develop new skills and build confidence in themselves through the use of technology.

The tour was coordinated by Carl Ray, a Tuskegee University graduate and educational consultant to the Intel Computer Clubhouse Network. Ray, a San Jose resident, has organized HBCU tours for the past 24 years. More than 5,000 students have participated in the tours.

Before boarding the bus for the hotel, the students met and became acquainted with others over dinner in the airport atrium. Many of them were meeting for the first time but would form bonding friendships over the next five days.

While the young men toured Morehouse, the ladies toured Spelman. The Morehouse orientation session was held in an auditorium with photos of famous alums: Spike Lee, “movie director,” Samuel L. Jackson, “actor,” and David Satcher, former U.S. Surgeon General. Students ask questions about GPA requirements, SAT scores, application fees and financial aid. The tour guide informs all seniors who had not taken the SAT, but plan to take it before they graduate high school, they probably would not be accepted to Morehouse if they applied. The SAT test should have been taken no later than June of their junior year in high school.

On Spelman’s campus the young ladies marveled at Camille Olivia Cosby Academic Center, which was constructed with funds from a $20 million donation from Bill and Camille Cosby in 1989. The Center houses the departments of fine arts, social sciences, humanities, a library and archival program of international African women research and resources.

The students had the opportunity to meet a former clubhouse member, Emanuel Ford. Ford, a junior majoring in Business and Marketing at Morehouse, from Portland, Oregon, went on the tour his junior year in high school. Ford said, “I had never heard of Morehouse before coming here on the tour. I am sure I wouldn’t be here if it wasn’t for the tour.” Malik Maye, an eight-grader from Detroit, said he would like to attend Morehouse to study Marketing and Filmmaking.

The group had lunch at Clark-Atlanta University with another former clubhouse member, Bilal Abbey, from the 3 River Clubhouse in Pittsburgh, Pa. Bilal is a junior majoring in History.

After lunch the group visited The Martin Luther King Jr. Center. They viewed the crypt of Dr. and Mrs. King, Eternal Flame, Freedom Walkway and the house where Dr. King was born and lived with his parents, grandparents and siblings.

At 5 p.m. the bus departed Atlanta for the two-hour ride to Moton Field in Tuskegee, Alabama. Moton Field was the air base of the Tuskegee Airman. African American aviators flew more than 200 missions escorting bombers in World War II and they never lost a bomber – at a time when the military view was that Blacks were not smart or brave enough to fly.

On Friday morning, the sun was shining in Montgomery as the group visited the Dexter Avenue King Memorial Baptist Church. Dr. King was pastor of the church in 1954 and helped organize the Montgomery Bus Boycott after Mrs. Rosa Parks was arrested for refusing to give up her seat to a white passenger. Montgomery is the birthplace of the Civil Rights Movement.

Friday afternoon the group visited the historic campus of Tuskegee University in Tuskegee, Alabama. The students were met at the Booker T. Washington statue by two former clubhouse members, Nikki Martinez from New York and Gerald Watson from Chicago; both went on the tour in 2008. Nikki is a junior majoring in Marketing and Sales and Gerald is majoring in Computer Science. They shared their memories of participating in clubhouse activities and coming on the tour. They both agreed that the tour was the reason they attended an HBCU.

Deontay Scott, a junior from Chicago, sat under the statue with the group on a sunny Alabama afternoon and reminisced of going to school down South. He stated that he liked Tuskegee and Clark Atlanta University; adding, “This trip showed me that there is a different world outside of Chicago. Now I know I can go to college and be successful.”

The afternoon included a visit to the George Washington Carver Museum. The scientist was known for his research with peanuts, which produced more than 300 products. The tour of the 5,000-acre campus included a visit to the campus cemetery where Booker T. Washington, George Washington Carver and several other Tuskegee notables are buried, the Kellogg Convention Center and Hotel, campus chapel, recreational center and book store. The group learned that Tuskegee is the number one producer of African American aerospace engineers in the United States and 70 percent of African-American veterinarians in the world.

Saturday morning at 9 a.m. the group was back at Tuskegee University for the Fall Open House, where over 1,500 high school students were introduced to the academic majors and careers offered at the university. The students met professors, financial aid staff, academic department deans, admission recruiters and college students. After the Open House, students were treated to a step-show, performed by members of the campus fraternities and sororities. In the afternoon they yelled, chanted and danced at the football game between Clark-Atlanta University and Tuskegee University. Tuskegee won the game, but more exciting than the game was the bands half-time performance.

On Saturday night the bus, filled with reenergized clubhouse members, returned to Atlanta. Destiny Mitchell from East Palo Alto announced, “Before this tour I was planning on attending a community college. Now I really want to attend Tuskegee or Spelman.” Carolyn Blue, coordinator and chaperone from the Detroit clubhouse, responded: “The opportunity for our youth to participate in these tours is a rewarding experience. The entire trip is filled with history, learning and sharing. They are motivated to succeed because they are exposed to positive people and historic places.”