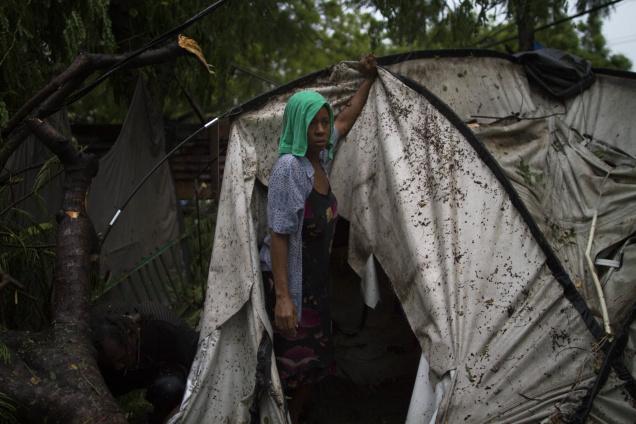 Broken and collapsed buildings remain in every neighborhood. Men pull oxcarts by hand through the street. Women carry 5-gallon plastic jugs of water on their heads, dipped from manhole covers in the street. Hundreds of thousands remain in grey sheet and tarp covered shelters in big public parks, in between houses and on any small pocket of land. Most of the people are unemployed or selling mangoes or food on the side of every main street. This was Port au Prince during my visit with a human rights delegation of School of Americas Watch – more than a year and a half after the earthquake that killed hundreds of thousands and made 2 million homeless.

What I did not see this week were bulldozers scooping up the mountains of concrete remaining from last January’s earthquake. No cranes lifting metal beams up to create new buildings. No public works projects. No housing developments. No public food or public water distribution centers.

Everywhere I went, the people of Haiti asked, “Where is the money the world promised Haitians?”

The world has moved on. Witness the rows of padlocked public port-o-lets standing on the sidewalk outside Camp St. Anne. The displacement camp covers a public park hard by the still hollow skeleton of the still devastated St. Anne church. The place is crowded with babies, small children, women, men and the elderly. It smells of charcoal smoke, dust and humans. Six hundred fifty families live there without electricity, running water or security.

I talked with several young women inside the camp of shelters, most about 8 feet by 8 feet made from old gray tarps, branches, leftover wood, and pieces of rusty tin. When it rains, they stand up inside their leaky shelters and wait for it to stop. In a path in front of one home, crisscrossed with clotheslines full of tiny children’s clothes, a group of women from the grassroots women’s group KOFAVIV told us Oxfam used to help administer the camp but quit in May.

When Oxfam left, the company that had been emptying the port-o-lets stopped getting paid and abandoned the toilets. Some people padlocked them and now charge a couple of cents to use the toilets, money most residents don’t have. There is no work to earn the money to pay for toilets. The Red Cross had just visited the camp that morning telling them they would be evicted in 10 days. Where will they go, we ask? We have no idea, they told us. Jesus will provide, they told us.

Bill Quigley is a law professor and human rights lawyer at Loyola University New Orleans and with the Center for Constitutional Rights. He volunteers with the Institute for Justice and Democracy in Haiti and the Bureaux des Advocats in Port au Prince. You can reach him at quigley77@gmail.com.