An interview with the Hozel Blanchard

Hozel Blanchard is the father of a prisoner in Calipatria State Prison who recently expired after the historic California prison hunger strike under mysterious circumstances.

M.O.I. JR: Before we get into the circumstances surrounding your son’s death, can you tell the people a little bit about your son’s history being locked up, and what has it been like for him to be locked up for the amount of time that he has been locked up?

Hozel: Well, actually he has been institutionalized, in January it would have been 17 years. And he has been pretty much placed around the system from certain penitentiaries: Folsom, Corcoran, Long Beach, pretty much throughout the system for a number of years. And for about the last five or six years, he’s been down at Calipatria.

His frame of mind has always been pretty good just because he’s always looked forward to having his just day in court, as far as being paroled, which he had been up for parole one time prior a few years ago. And he was due up for parole coming up in February. So his frame of mind has been pretty positive for all these years, ‘cause what he had always strived for was to work to get out.

His frame of mind has always been pretty good just because he’s always looked forward to having his just day in court, and he was due up for parole coming up in February.

Hozel: From the information that I received, I didn’t know a lot about it at first because I had been in Ohio and I came back to California. But his daughter had informed me and a few other people who were involved had kept me up to date on what was going on. I think it originated out of Pelican Bay, but it’s been going on for quite some time, but naturally in the prison system they keep everything on the quiet side so it doesn’t gain any media attention.

So periodically as transfers go throughout the system, the inmates go from Pelican Bay to another institution, they spread the word naturally from one community to another. So it’s been going on in the penal institution in California for some time. And I know he had become involved, probably around the end of last year or the beginning of this year. And it was pretty controversial, naturally when you bumpin’ heads with the guards. They definitely detest anything of that nature, so it didn’t make them very happy.

M.O.I. JR: Let’s back up a little bit. What were the conditions like that your son was living in in Calipatria and in other parts of the prison system? What were the prisoners protesting exactly, as far as you understand it.

Hozel: You know things are pretty rough in the population outside of the institution. I’m talking about within the country itself. Things are hard on people overall. And I guess for the last few years, three or four years, things have become real distasteful in the institution of prison.

You know if it’s hard out here, it’s going to be three times as hard in there. The treatment had did a 180 (degree turn). That all changed. And the relationships between the guards and the administration had began to change. The relationship started becoming a little bit more nastier, I guess. Their relationship (to the prisoners) started to become more distant.

I know in Calipatria they had a changing of the guard – a new warden and some more people in – and they had different requirements.

Hozel: I think that this was the end of last year.

M.O.I. JR: So they changed up the administration in the prison, the prison strike goes down, then what happens in the big story, as well as in the story of your son?

Hozel: Well, as far as the story of my son, it also involves other prisoners because from what I understand, some prisoners had to be hospitalized …

M.O.I. JR: Because of the hunger strike?

Hozel: Right. Because all of this revolves around the hunger strike. From what I understand, they had some transfers from Pelican Bay down to Calipatria. They brought their measures and their beliefs with them when they came to Calipatria, so it passed on to the other inmates. And you have a great deal of Hispanics down there also, which created an environment, from what I understand, although some people say that they were not together but I understand that they were. It was kind of unified.

But he had become I don’t know how much of a spokesperson, but he was involved pretty strongly in the hunger strike itself. And naturally they weren’t very cooperative with that there. As far as I know, by the end of October something came on to where he had a confrontation with one of the guards. I haven’t got all of the information on that because they won’t release any reports or anything to the family. But a confrontation ensued between him and one of the guards, and the next thing we know he was in the hole, and things really started to happen.

He had become I don’t know how much of a spokesperson, but he was involved pretty strongly in the hunger strike itself. And naturally they weren’t very cooperative with that.

Hozel: This had to be the end of October.

Hozel: My granddaughter, his daughter, received a call stating what happened, that he had committed an act of suicide. And that was rather unbelievable – unbelievable to all of the family and friends, who know him and know what he was working towards.

That had never crossed anybody’s mind, and so I spoke with the captain, Capt. Lady Wainwright down at Calipatria, and she explained to me what happened. She told me he had hung himself. That was unacceptable. I knew that did not happen.

So she hooked me with the doctor, but up to this day nobody has really explained how it happened or anything. And the thing that is really puzzling is the fact that he was in isolation. And had been there since the end of October.

M.O.I. JR: Excuse my ignorance, but when you are taken to isolation, you are taking there with virtually nothing, am I right?

Hozel: Absolutely. That’s it. Nothing. Everything is supposed to be minimized to the minimum. And it’s supposed to be an hourly check on inmates that are isolated from the population.

Hozel: Well, that’s the ironic thing about it. That has been kept on a very low profile. They are not sharing information at all about that. And the media is getting bits and pieces, just totally kibbles and bits about this here. It’s like it has been going on for a while, and nobody has really heard of it until these here incidences started to occur throughout the system.

And since my son had supposedly committed this act, they say, what’s ironic and makes it unbelievable is two months prior to his, there was another gentleman who supposedly had committed suicide. Now this was in September. Now I don’t know how that goes but that should be a red alert right there.

M.O.I. JR: And you said that he was also involved in the prison strike?

Hozel: Exactly. So things are happening at a very alarming rate.

M.O.I. JR: What is it that the listeners could do to help your family, as well as help the prisoners who are still languishing behind enemy lines?

Hozel: Well, the thing is that people have to focus on if they have loved ones, family, friends, who are institutionalized, it’s always hard to convey any kind of information back and forth, period. It’s because everything goes through them (prison authorities), so what’s accepted is definitely going to have to be approved and disapproved by them.

You have to get people of legal gender involved, which is happening now. A lot of that is happening. They have a counsel in San Francisco, who is looking into it for the prisoners, for all of the inmates throughout California. But the media kind of needs to focus in on it and to bring it to a little bit more attention, so the overall population can see what’s going on, because the conditions are a little bit atrocious and the punishment is probably a little bit overwhelming. And it is naturally un-due.

People in general don’t know what goes on in there inside the prisons, but the media can focus in on it. Some inmates have been hospitalized (because of the hunger strike), such as my son and other ones who do not go along with what the guards say. Their punishment is (solitary) confinement.

The media has to be a real focal point, because people in general, the general population, definitely doesn’t know what goes on in there inside the prisons, but the media can focus in on it. And you have certain things that are happening, where from what I understand, some inmates have been hospitalized and they’re generally, such as my son, in (solitary) confinement and other ones who do not go along with what the guards say. Naturally their punishment is (solitary) confinement. So I’m sure that it’s a lot of that going on also. 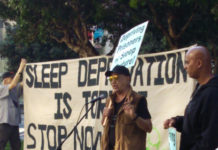