CDCR is back to its original torturer tactics

Written Nov. 27, 2011 – The CDCR (California Department of Corrections and Rehabilitation) did everything but kill us this last go-round because, as I have said, the torture can always be seen in their policy. We had always stipulated that we were on a peaceful nonviolent hunger strike. This way no one could accuse us of causing any problems against CDCR and the prisons we’re held in throughout California. 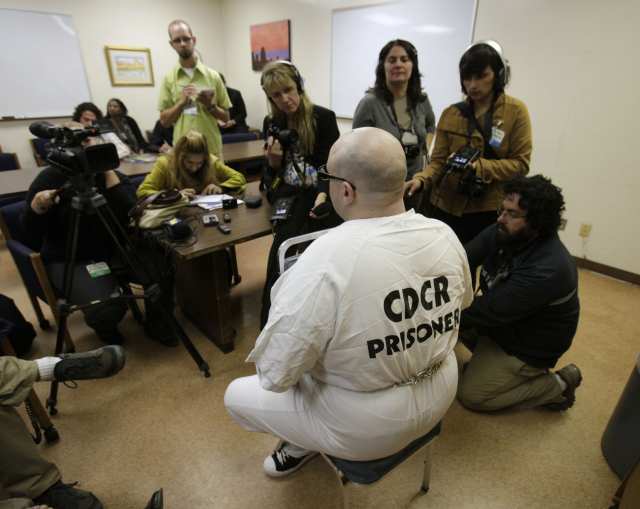 On Sept. 26, 2011, we prisoners officially went back on our nonviolent hunger strike, where our only action is sitting in our cells starving ourselves to death in protest of the constant human rights violations, where we prisoners are made to suffer indefinite SHU terms in solitary confinement for nothing, while being subjected to constant attacks by prison officials in order to encourage our debriefing.

We prisoners are made to suffer indefinite SHU terms in solitary confinement for nothing, while being subjected to constant attacks by prison officials in order to encourage our debriefing.

On Sept. 29, 2011, about 30 guards, two to each prisoner, came to escort us to Administration Segregation Unit ASU-H-Row, which was soon termed “Hell-Row.” Each of us was ordered to put on only our shoes, socks, boxer shorts and T-shirt. Each of us complied with these orders without incident.

Once all of us were removed from our cells, we were then led to the tunnel where we were met with another 20-30 officers who had created a “soul train line” for us to walk through. The 15 prisoners all come out of the short corridor D1-D4. Once all the prisoners were lined up in the tunnel with over 50-60 officers, it was a period of silence, which I believe was for the purpose of intimidation. It didn’t work.

Once the leading officer, after about three minutes, instructed the officers to begin moving us out, we were led to the clinic, where some quack of a psychiatrist asked us were we “mentally sane” and many of us refused to respond. Once the last person was asked, we were escorted out of the tunnel and into the outside area. After about 200 yards of walking, we were going through another checkpoint where a correctional officer with a clipboard told the escorting officers that we go to the following cells.

Many of us had never been placed in the new Ad-Seg cells. We realized that these cells are truly unfit for anyone to live in. They are compressed; you can be on the bottom bunk and have your feet resting on the toilets, you are two to three steps away from the front door and the cold blowers were deliberately turned on in order to make sure we suffered.

We were placed on Hell-Row for “concentrated torture.” Yes, we were placed in ice cold cells and given nothing. The cold blowers were deliberately turned on to intensify our suffering in Ad-Seg in order to try and get us to eat. Each and every one of us refused to eat.

When the warden was asked why were we here, he said because we were the leaders of the hunger strikers which have caused a disturbance throughout the prison system. When asked who authorized our placement in ASU, he said Secretary M. Cate and Undersecretary S. Kernan.

We told him that there was no leaders of the hunger strikers; it’s just negotiators/representatives who actually volunteered because they didn’t want people dying on the hunger strike without ever having their voice heard, so those individuals who are the negotiators should be commended, not further tortured. I asked him why am I here; I am not no negotiator. He said I don’t know, but I’ll get back to you. He never did get back to me.

The officials continued to come around in order to try and persuade us to eat, but we continued to refuse to eat. The chief deputy warden came walking the tier and he told us if we don’t eat we will be receiving CDCR rule violation reports. I told him if we are willing to lay down our lives for the 25 years of torture we have suffered – whereas you have been a conspirator – then what difference would a CDCR rule violation report make?

The cold blowers were turned up on high, and we continued to suffer. It should be clear we were forced to suffer on Hell Row 15 days straight until the negotiators made a deal along with our mediation team lawyers. And it should be clear that I am basically touching the surface due to the litigation pending.

The cold blowers were turned up on high, and we were forced to suffer on Hell Row 15 days straight until the negotiators made a deal along with our mediation team lawyers.

Once we were ordered back to our cells, we would discover that the correctional officers had deliberately trashed our cells. All our cosmetics, thermal tops and bottoms, political writings, legal material, books etc. were stolen – not confiscated – outright taken away from us while we were held in Ad-Seg.

It should be clear that all these retaliatory actions was deliberate in order to “instigate some violence” out of prisoners. It didn’t work, and we remain very much committed and dedicated to our peaceful nonviolent protocol.

All these retaliatory actions was deliberate in order to “instigate some violence” out of prisoners. It didn’t work, and we remain very much committed and dedicated to our peaceful nonviolent protocol. CDCR has used any acts of violence  to dehumanize us in order to justify their inhumane policies.

Looking back on it now, we realize that CDCR has used any acts of violence to propagate against us all whenever they need to dehumanize us in order to justify their inhumane policies, decisions and treatment against us. We have lost our right to be paroled based on the criteria set by the Parole Board, family visits, visits, educational programs, nutritional diet, adequate medical treatment, pictures, food sales, news, TV and movies, weights etc. – all lost in the name of the threat to safety and security of the institution. All this is being lost based on how CDCR officials manipulate prison violence.

Therefore our question is what do we want for ourselves? We got prisoners still incarcerated on one-year-to-life sentences or seven-to-life sentences that go back to the ‘60s and ‘70s, prisoners still locked up on 15-to-life, 25-to-life on early ‘80s sentences when they have met all the criteria for parole. But the Parole Board is overseen by nothing but racist, money-hungry Board of Prison hearing commissioners and deputy commissioners who do not see nothing but criminals and modern-day slaves when a prisoner is before them.

So we, as prisoners, have to create the conditions behind these prison walls that will justify our own rehabilitation and humanity. Because the current practices is to keep us in an environment where we all remain immune to misery and half-life. We’re responsible for our future.

Racist, money-hungry Board of Prison hearing commissioners see nothing but criminals and modern-day slaves when a prisoner is before them. So we, as prisoners, have to create the conditions behind these prison walls that will justify our own rehabilitation and humanity.

I told you all that many have died and many more will continue to die. Within the last few months we lost two prisoners in these torture chambers, one in the ASU, where the officials took us to torture us. The word is they committed suicide. Usually when someone commits suicide it’s because they’re unable to take the pressure that’s being placed on them.

But here’s something we all need to beware of: Medical has used psychiatric drugs to “treat pain” in low doses and all these drugs cause “suicidal thoughts” and chemical imbalances in the prisoner’s brain functions, which is why many prisoners for the last 20 years have been turned into zombies because their medical treatment has been these drugs that have side effects that are associated with suicide.

Also, it’s important to know that the torture prisoners have sustained over the last 25 years is unbearable for some, and prisoners are unable to get prison guards’ attention if you are in an emergency situation – and this is in their ASU orientation manual. So we educate the people in the public as to what’s going on, but there are a lot more prisoners who will be dying in these SHUs, Ad/Segs etc. because of medical neglect and real psychological evaluation.

Usually when someone commits suicide it’s because they’re unable to take the pressure that’s being placed on them. But we all need to beware that medical has used psychiatric drugs to “treat pain” in low doses and all these drugs cause “suicidal thoughts.” A lot more prisoners will be dying in these SHUs and Ad/Segs.

The torture is in the policy and I am aware of prisoners’ situations because they’re right here with me. We have guys who can’t hear, see and are suffering from bacterial diseases etc. I personally think this quack Dr. Sayres gets off telling prisoners they only have a few more days to live.

The public has to realize that the system oppresses humanity for one purpose: to exploit them. Occupiers, we support you wholeheartedly. Corporate America is worth $23 trillion but the so-called people’s government is in debt for $15 trillion. How does that work when many of these corporations get subsidies from the people’s so-called government?

Mutope Duguma, aka James Crawford, has been reporting to Bay View readers on the hunger strike from the beginning. He is the writer of “The Call,” the formal announcement that alerted the world to this massive hunger strike, “SHU prisoners sentenced to civil death begin hunger strike,” “This hunger strike is far from over,” “Pelican Bay SHU prisoners plan to resume hunger strike Sept. 26,” “Greed drives solitary confinement torture,” “Hip hop community, support our hunger strike!” “Retaliation at Pelican Bay: Letters from the SHU” and “We are willing to sacrifice ourselves to change our conditions.” This letter was typed by Adrian McKinney. Send our brother some love and light: Mutope Duguma, s/n James Crawford, D-05996, D1-117U, PBSP-SHU, P.O. Box 7500, Crescent City, CA 95532.