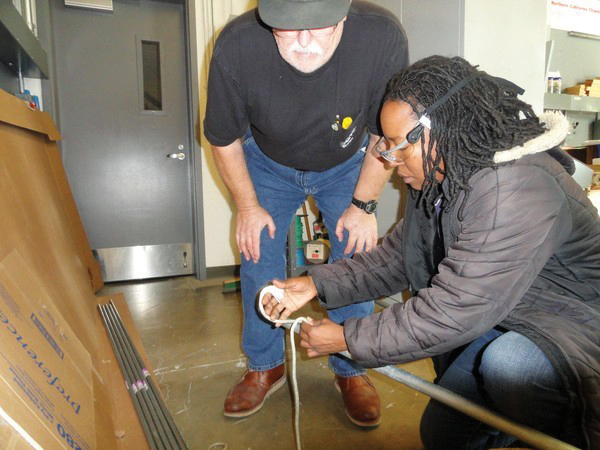 The underclass and the people who purport to advocate for them are powerless and continue to be used. Lucy of Peanuts fame always moves the football just as Charlie Brown is about to kick it. No matter how many times this situation is presented, Charlie Brown falls for the Lucy explanation that this time it will be different. She promises not to move the football and that she will allow Charlie to kick the ball. Charlie always falls for this trick.

Advocates for economic justice always fall for the promises of inclusion contained in the federal law and the federal regulations. The results are always the same. There is very little fairness or economic justice. The money brought in to help the underclass of Oakland is exported to other venues. People outside of Oakland always fill the labor requirements created by these funds.

Oakland exports profit and imports labor. This is why there are few Black men working.

The Port of Oakland recently applied to DOT (Department of Transportation) for money to expand the port. The port commissioners held a press conference to extol the virtues of this project.

A few months ago BART received money from DOT to build an unnecessary BART connector to the airport. On Friday I walked the BART connector project. I found one worker who was a descendant of slaves on this $1 billion project.

A census of the unemployed was used to motivate the funding of this project. Few if any unemployed people of Oakland will get any of this money. The minority contractors, who tend to employ members of their own tribe, have contracts whose value is less than 1/2 of 1 percent. That fraction amounts to crumbs. The dollar amount equals less than $5 million out of what will be a final cost of more than $1 billion. This is why there are few Black men working.

I walked the BART connector project. I found one worker who was a descendant of slaves on this $1 billion project.

The port press conference headlined how good this proposal is for Oakland. Our City Council president loves to brag about the projects he brings to Oakland. He extolled the virtues of this project and what it means for Oakland. Descendants of slaves and others of the underclass will be counted to justify this grant. They will receive very little benefit from these federal dollars.

Entrepreneurs outside of Oakland view this town as prey. They are vultures feasting on the largess of Oakland. They disdain living here. The politicians of Oakland are constantly fattening frogs for snakes.

Highland Hospital is another case in point. The taxpayers of Alameda County approved a bond measure of $700 million for a new facility. Public officials brought in a contractor who works in D.C. to build this facility. The award was made without guarantees that the underclass would get its fair share. This contractor, like Lucy, promised that he would share the business and the labor locally. As the underclass of this county approaches the ball, Lucy has once again moved the ball as Charlie Brown tries to kick it. This is why there are few Black men working.

The solution to this problem is to write legislation that will compel outsiders to joint venture with locally owned companies so that we can build local capacity and recirculate dollars in the community from which those dollars came. The Oakland Unified School District is finally doing this. Others should follow.