by Bill Quigley and Amber Ramanauskas 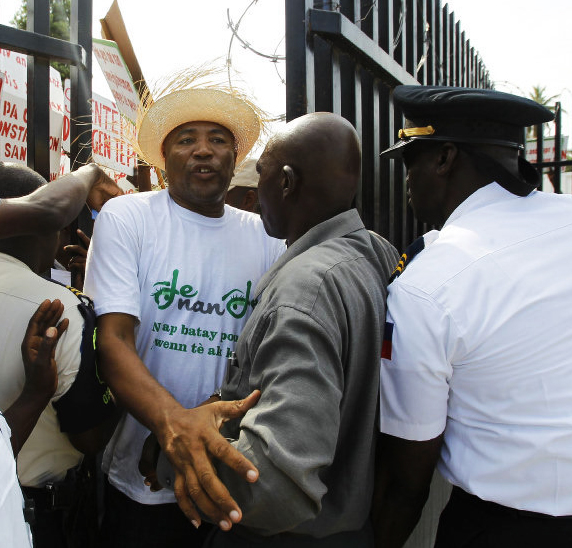 Haiti, a close neighbor of the U.S. with over 9 million people, was devastated by earthquake on Jan. 12, 2010. Hundreds of thousands were killed and many more wounded.

Yet Haiti looks like the earthquake happened two months ago, not two years. Over half a million people remain homeless in hundreds of informal camps, most of the tons of debris from destroyed buildings still lies where it fell, and cholera, a preventable disease, was introduced into the country and is now an epidemic killing thousands and sickening hundreds of thousands more.

It turns out that almost none of the money that the general public thought was going to Haiti actually went directly to Haiti. The international community chose to bypass the Haitian people, Haitian non-governmental organizations and the government of Haiti. Funds were instead diverted to other governments, international NGOs and private companies.

Almost none of the money that the general public thought was going to Haiti actually went directly to Haiti.

Despite this near total lack of control of the money by Haitians, if history is an indication, it is quite likely that the failures will ultimately be blamed on the Haitians themselves in a “blame the victim” reaction.

Haitians ask the same question as many around the world: “Where did the money go?”

Here are seven places where the earthquake money did and did not go.

One: The largest single recipient of U.S. earthquake money was the U.S. government. The same holds true for donations by other countries.

Right after the earthquake, the U.S. allocated $379 million in aid and sent in 5,000 troops. The Associated Press discovered that of the $379 million in initial U.S. money promised for Haiti, most was not really money going directly, or in some cases even indirectly, to Haiti. They documented in January 2010 that 33 cents of each of these U.S. dollars for Haiti was actually given directly back to the U.S. to reimburse ourselves for sending in our military. Forty-two cents of each dollar went to private and public non-governmental organizations like Save the Children, the U.N. World Food Program and the Pan American Health Organization. Hardly any went directly to Haitians or their government.

They documented in January 2010 that 33 cents of each of these U.S. dollars for Haiti was actually given directly back to the U.S. to reimburse ourselves for sending in our military.

Two. Only 1 percent of the money went to the Haitian government.

Less than a penny of each dollar of U.S. aid went to the government of Haiti, according to the Associated Press. The same is true with other international donors. The Haitian government was completely bypassed in the relief effort by the U.S. and the international community.

The Center for Economic and Policy Research, the absolute best source for accurate information on this issue, analyzed all the 1,490 contracts awarded by the U.S. government after the January 2010 earthquake until April 2011 and found only 23 contracts went to Haitian companies. Overall the U.S. had awarded $194 million to contractors, $4.8 million to the 23 Haitian companies, about 2.5 percent of the total. On the other hand, contractors from the Washington, D.C., area received $76 million or 39.4 percent of the total. As noted above, the U.N. documented that only four tenths of 1 percent of international aid went to Haitian NGOs.

Overall the U.S. had awarded $194 million to contractors, $4.8 million to the 23 Haitian companies, about 2.5 percent of the total. The U.N. documented that only four tenths of 1 percent of international aid went to Haitian NGOs.

The American Red Cross received over $486 million in donations for Haiti. It says two-thirds of the money has been contracted to relief and recovery efforts, though specific details are difficult to come by. The CEO of American Red Cross has a salary of over $500,000 per year. 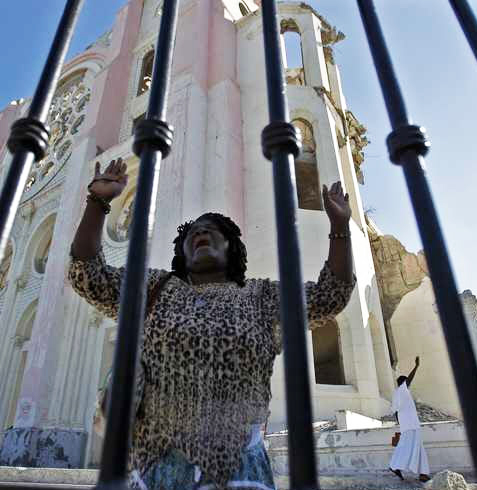 Look at the $8.6 million joint contract between the U.S. Agency for International Development (USAID) with the private company CHF for debris removal in Port au Prince. CHF is a politically well-connected international development company with an annual budget of over $200 million whose CEO was paid $451,813 in 2009. CHF’s connection to Republicans and Democrats is illustrated by its board secretary, Lauri Fitz-Pegado, a partner with the Livingston Group LLC. The Livingston Group is headed by the former Republican speaker-designate for the 106th Congress, Bob Livingston, doing lobbying and government relations. Ms. Fitz-Pegado, who apparently works the other side of the aisle, was appointed by President Clinton to serve in the Department of Commerce and served as a member of the foreign policy expert advisor team on the Obama for president campaign. CHF “works in Haiti out of two spacious mansions in Port au Prince and maintains a fleet of brand new vehicles,” according to Rolling Stone.

Rolling Stone, in an excellent article by Janet Reitman, reported on another earthquake contract, a $1.5 million contract to the New York-based consulting firm Dalberg Global Development Advisors. The article found Dalberg’s team “had never lived overseas, didn’t have any disaster experience or background in urban planning … never carried out any program activities on the ground …” and only one of them spoke French. USAID reviewed their work and found that “it became clear that these people may not have even gotten out of their SUVs.”

Presidents George W. Bush and Bill Clinton announced a fundraising venture for Haiti on Jan. 16, 2010. As of October 2011, the fund had received $54 million in donations. It has partnered with several Haitian and international organizations. Though most of its work appears to be admirable, it has donated $2 million to the construction of a Haitian $29 million for-profit luxury hotel.

“The NGOs still have something to respond to about their accountability, because there is a lot of cash out there,” according to Nigel Fisher, the U.N.’s chief humanitarian officer in Haiti. “What about the $1.5 to $2 billion that the Red Cross and NGOs got from ordinary people and matched by governments? What’s happened to that? And that’s where it’s very difficult to trace those funds.”

Five. Some money went to for-profit companies whose business is disasters.

Less than a month after the quake hit, U.S. Ambassador Kenneth Merten sent a cable titled “THE GOLD RUSH IS ON” as part of his situation report to Washington. In this Feb. 1, 2010, document, made public by The Nation, Haiti Liberte and Wikileaks, Ambassador Merten reported the president of Haiti met with former Gen. Wesley Clark for a sales presentation for a Miami-based company that builds foam core houses.

Less than a month after the quake hit, U.S. Ambassador Kenneth Merten sent a cable titled “THE GOLD RUSH IS ON” as part of his situation report to Washington.

Capitalizing on the disaster, Lewis Lucke, a high ranking USAID relief coordinator, met twice in his USAID capacity with the Haitian prime minister immediately after the quake. He then quit the agency and was hired for $30,000 a month by a Florida corporation, Ashbritt – known already for its big no-bid Katrina grants – and a prosperous Haitian partner to lobby for disaster contracts. Locke said, “It became clear to us that if it was handled correctly, the earthquake represented as much an opportunity as it did a calamity.” Ashbritt and its Haitian partner were soon granted a $10 million no-bid contract. Lucke said he was instrumental in securing another $10 million contract from the World Bank and another smaller one from CHF International before their relationship ended.

Six. A fair amount of the pledged money has never been actually put up.

The international community decided it was not going to allow the Haiti government to direct the relief and recovery funds and insisted that two institutions be set up to approve plans and spending for the reconstruction funds going to Haiti. The first was the Interim Haiti Recovery Commission (IHRC) and the second is the Haiti Reconstruction Fund (HRF).

In March 2010, U.N. countries pledged $5.3 billion over two years and a total of $9.9 billion over three years in a conference March 2010. The money was to be deposited with the World Bank and distributed by the IHRC. The IHRC was co-chaired by Bill Clinton and the Haitian prime minister. By July 2010, Bill Clinton reported only 10 percent of the pledges had been given to the IHRC.

Seven. A lot of the money which was put up has not yet been spent.

Nearly two years after the quake, less than 1 percent of the $412 million in U.S. funds specifically allocated for infrastructure reconstruction activities in Haiti had been spent by USAID and the U.S. State Department and only 12 percent has even been obligated, according to a November 2011 report by the U.S. Government Accountability Office (GAO).

Nearly two years after the quake, less than 1 percent of the $412 million in U.S. funds specifically allocated for infrastructure reconstruction activities in Haiti had been spent.

The performance of the two international commissions, the IHRC and the HRF, has also been poor. The Miami Herald noted that as of July 2011, of the $3.2 billion in projects approved by the IHRC, only five had been completed for a total of $84 million. The Interim Haiti Recovery Commission (IHRC), which was severely criticized by Haitians and others from its beginning, has been effectively suspended since its mandate ended at the end of October 2011. The Haiti Reconstruction Fund was set up to work in tandem with the IHRC, so while its partner is suspended, it is not clear how it can move forward.

The effort so far has not been based on a respectful partnership between Haitians and the international community. The actions of the donor countries and the NGOs and international agencies have not been transparent so that Haitians or others can track the money and see how it has been spent. Without transparency and a respectful partnership, the Haitian people cannot hold anyone accountable for what has happened in their country. That has to change.

The U.N. Special Envoy to Haiti suggests the generous instincts of people around the world must be channeled by international actors and institutions in a way that assists in the creation of a “robust public sector and a healthy private sector.” Instead of giving the money to intermediaries, funds should be directed as much as possible to Haitian public and private institutions. A “Haiti First” policy could strengthen public systems, promote accountability, and create jobs and build skills among the Haitian people.

A “Haiti First” policy could strengthen public systems, promote accountability, and create jobs and build skills among the Haitian people.

Respect, transparency and accountability are the building blocks for human rights. Haitians deserve to know where the money has gone, what the plans are for the money still left, and to be partners in the decision-making for what is to come.

After all, these are the people who will be solving the problems when the post-earthquake relief money is gone.

Bill Quigley teaches at Loyola University New Orleans, is the associate legal director at the Center for Constitutional Rights and volunteers with the Institute for Justice and Democracy in Haiti. Amber Ramanauskas is a lawyer and human rights researcher. A more detailed version of this article with full sources is available. Bill can be reached at quigley77@gmail.com. Amber can be reached at gintarerama@gmail.com.