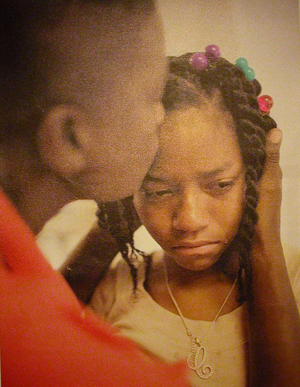 Thousands of mothers currently incarcerated in the California state prison system are now eligible to serve out the end of their sentences at home or in local facilities. To qualify for the program, women must be “primary caregivers” convicted of non-violent, non-serious, non-sexual offenses with remaining prison sentences of less than two years.

Roughly half of the 9,543 women currently incarcerated in state prison fall into this category. But CDCR estimates department case managers will approve only about 500 inmates for early release.

One of the reasons more women will not qualify is a lack of support services at the local level, including drug treatment and transitional housing programs, said Dana Toyama, CDCR spokeswoman.

“They have to be released to their county of last legal residence, and they have to have some sort of rehabilitative program to go to,” she said. “We do have inmates that want to do this but there’s just nothing available in their community.”

Currently, only a few of the State’s 58 counties are prioritizing their rehabilitation programs, said Barry Krisberg, director of research and policy at the Earl Warren Institute of the UC Berkeley School of Law.

“The statistics would argue that recidivism rates are going to be low if we can give them some treatment services,” he said. “This will work well in some places because you have a critical mass of people that want to innovate: prison less, community more. But there’s just a dozen of them at the best.”

The program is estimated to save the state about $6 million a year. But it’s not clear how much if any of that will go towards funding local services. Advocates have expressed anxiety even in innovative counties like Alameda and San Francisco, where law enforcement officials are working closely with service providers.

“There’s a tremendous amount of concern that there is not enough money to do what we need to do,” said Ruth Morgan, executive director of San Francisco based Community Works.” We need money to provide parent education, to provide family support, to hire case managers. For the last five years, we’ve all seen tremendous cuts in our programs.”

In part, releasing these mothers is motivated by a larger realignment effort to reduce prison overcrowding, mandated by the U.S. Supreme Court. In total, the state is looking to empty its prisons of at least 33,000 inmates.

The transfer of inmates from state facilities to local county jails has already started as the first step in the program.

Qualifying mothers under the release program – widely seen as the lowest risk population – would be required to live in either sober living treatment facilities, transitional house or at their own legal residence. They will report to parole agents and be electronically monitored.

The idea is to reunite families, said Robert Oaks, spokesperson for Sen. Carol Liu, District 21, author of the bill that created the program.

“Research has shown that if you keep women and their kids together, they’re far less likely to repeat offend,” Oaks said. “And the kids are far less likely to end up in the foster care system. If we can break the cycle, we’re going to save so much money compared to the huge cost we have in the state budget for corrections right now.”

About 19,000 children have mothers serving time in the California prison system, according to the National Research Council on Crime and Delinquency. And these children are at a very high risk for ending up in prison themselves, said Nell Burnstein, author of “Children of the Incarcerated.”

“When you ask what’s the effect on the child of having an incarcerated parent, the answer is exactly the same as losing a parent in any other way, except that you’re stigmatized rather than helped by the community,” she said. “The single best predictor that a kid is going to end up in prison: being in foster care.”

JeVaughn Baker, spokesman for the California Correctional Peace Officers Association, recognized the state’s significant budget crisis and said cuts to corrections has to be a part of saving money in California. However, he emphasized this should not come at the cost of public safety.

“There has to be a real commitment to these reentry programs and support services,” he said. “If you’re talking about vocational training, transitional housing, substance abuse training, we’re very much in favor of those things. Those resources have to be there. Obviously that’s the difficulty now within the community and at the local level.”

Currently, it costs an average of about $49,000 a year to house one inmate in state prison. The state is estimated to save $2 billion annually due to prison realignment.

Gov. Jerry Brown has pledged to provide immediate and long term funding for local law enforcement departments. But many fear it won’t show up in time, and a major opportunity to reform criminal justice in California will be lost.

Karen Shain, policy director with Legal Services for Prisoners with Children, has been working with mothers applying for the release program. She said many of the women are very excited but, at the same time, they’re concerned about the challenges of making a successful transition.

“What I don’t want is for these women to be set up to fail because there’s no way to get a job, get a house, reunify with their kids, get food stamps, all the things that you need in order to really survive,” she said.

Joshua Emerson Smith has reported for community radio in Berkeley and in Valdez, Alaska, and is currently writing mostly for the San Francisco Bay Guardian and the East Bay Express. He can be reached at emerson.joshua@gmail.com. This story first appeared on HealthyCal.org.