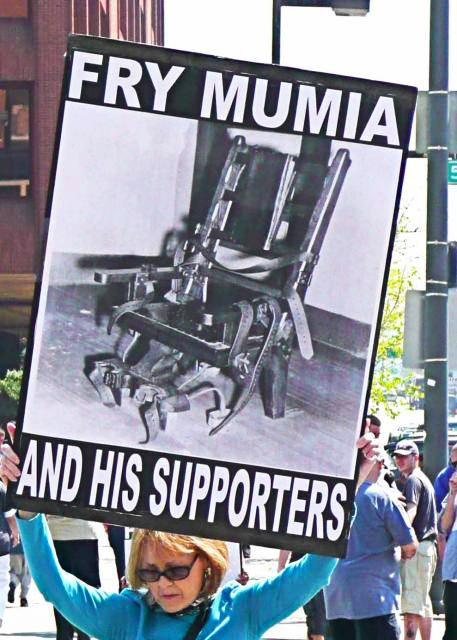 Credit “people power” for getting internationally known inmate Mumia Abu-Jamal sprung from his apparently punitive, seven-week placement in “The Hole.”

For the first time since receiving a controversial death sentence in 1982 for killing a Philadelphia policeman, the widely acclaimed author-activist finds himself in general population, a prison housing status far less restrictive than the solitary confinement of death row.

Inmates in general population have full privileges to visitation, telephone and commissary, along with access to all prison programs and services, all things denied or severely limited to convicts on death row waiting to be killed by the state.

In early December 2011, Pennsylvania Department of Corrections officials, after the federal courts had removed his death penalty and the Philadelphia district attorney opted not to attempt to re-try the penalty phase in hopes of winning a new death sentence, placed Abu-Jamal in administrative custody (aka “The Hole”).

Administrative custody is confinement in a Spartan isolation cell where conditions are more draconian than even death row.

The release of Abu-Jamal from administrative custody into general population on Friday, Jan. 27, 2012, followed a multi-layered protest campaign by his supporters worldwide that included flooding Pennsylvania prison authorities with telephone calls, collecting petitions containing over 5,000 signatures and a complaint filed with United Nations Special Rapporteur on Torture.

Supporters condemned the administrative custody placement, calling it retaliation for Abu-Jamal’s having successfully defeated the state’s efforts to execute him. Abu-Jamal, a model prisoner, did not meet any of the 11 specific circumstances listed in Pennsylvania Department of Corrections (DoC) regulations dictating administrative custody placement.

The release of Abu-Jamal from administrative custody into general population on Friday, Jan. 27, 2012, followed a multi-layered protest campaign by his supporters worldwide that included flooding Pennsylvania prison authorities with telephone calls, collecting petitions containing over 5,000 signatures and a complaint filed with United Nations Special Rapporteur on Torture.

Prison staff evaluations of Abu-Jamal since his December death row removal, sources said, listed him as “polite [and] respectful.” Those positive evaluations did not evidence any of the incorrigibility or other serious misbehaviors that usually trigger AC placement.

“When people are united around an issue, they have power. This is the power of the people – all races in many places,” said Pam Africa, director of the Philadelphia-based International Concerned Friends and Family of Mumia Abu-Jamal.

Abu-Jamal, in a statement released through his wife Wadiya Jamal, thanked his supporters for their hard work. “I am no longer on death row, no longer in the hole, I’m in population,” Abu-Jamal’s statement noted. “This is only Part One and I thank you for the work you’ve done. But the struggle is for freedom!”

Media reports quoted Pennsylvania DoC spokespersons confirming Abu-Jamal’s placement in general population at Mahanoy Prison, a medium security facility about 100 miles from Philadelphia in central Pennsylvania where he was transferred last December from another prison in western Pennsylvania that houses the state’s death row.

Prison officials advanced ever-changing rationales for keeping Abu-Jamal in AC at Mahanoy, including the curious claim that they were waiting for legal clarification that the courts had formally replaced Abu-Jamal’s death sentence with life in prison.

Typical of the way that Abu-Jamal’s long-running case has shone a bright light on grievous abuses within the criminal justice system, his AC placement exposed what independent prison monitors have long contended is a dirty secret of Pennsylvania’s prison system: authorities using administrative custody isolation to maliciously penalize inmates who are not violating prison rules.

Bret Grote, a spokesman for the Pennsylvania Human Rights Coalition, said during a media interview that prison authorities misuse administrative custody as repression against inmates for their political activism, their complaining about poor conditions in prison, their roles as jailhouse lawyers and often for racist reasons.

Grote said Pennsylvania’s DoC holds approximately 2,500 of its 50,000-plus prisoners in solitary confinement on any given day. That’s 5 percent of the total.

Prison authorities misuse administrative custody as repression against inmates for their political activism, their complaining about poor conditions in prison, their roles as jailhouse lawyers and often for racist reasons.

“Andre Jacobs and Carrington Keys, two members of a group of prisoners known as the Dallas 6 [Dallas is a Pennsylvania prison] have been held in solitary for approximately 11 and nine years respectively as a result of their speaking out against torture and other human rights violations inside the state’s control units,” Grote said during an interview with Prison Radio.

Philadelphian Russell “Maroon” Shoats, a former Black Panther Party and Black Liberation Army member, has spent 30 of his 40 years in prison inside an isolation cell despite not having any prison infractions, said his daughter Theresa Shoats during a press conference in Philadelphia held one day before Abu-Jamal’s release.

“Prison officials keep my Dad in solitary instead of releasing him into general population because they say he is a leader. My Dad turns 70 this year and he has medical problems, some from being in solitary for so long. Keeping him in solitary is unfair,” Shoats said about her father, who was convicted of killing a Philadelphia policeman.

“My Dad says he encourages young inmates to read to stay sane. Why does that make him too dangerous for general population? He told me that 15 young men hung themselves in SCI Greene during a one-year period.”

Last October, U.N. Special Rapporteur on Torture Juan Mendez called on all countries worldwide to ban the use of solitary confinement of inmates as punishment and/or an extortion technique, except in very exceptional circumstances.

Last October, U.N. Special Rapporteur on Torture Juan Mendez called on all countries worldwide to ban the use of solitary confinement of inmates as punishment and/or an extortion technique, except in very exceptional circumstances.

Recently a federal jury awarded a New Mexico man $22 million for violations of his constitutional rights arising from his having spent two years in solitary confinement in a county jail in Albuquerque following a drunk driving arrest. Although during that entire time he was never even charged or brought to trial, authorities in Dona Ana County New Mexico vow to appeal that verdict, one of the largest damage judgments in history for illegal incarceration.

Linn Washington, a professor of journalism at Temple University and award-winning columnist for the Philadelphia Tribune, has covered Mumia Abu-Jamal’s fight for freedom from the beginning, in December 1981. This story first appeared on This Can’t Be Happening, the website featuring the work of a news collective comprising Linn Washington and three other renowned journalists. They can be reached at thiscantbehappeningmail@yahoo.com.

Message from Wadiya A. Jamal, wife of Mumia Abu-Jamal

Saturday, July 28, 7:30 p.m. – I just received a call from my beloved husband who is now out of administrative custody and in general population at SCI Mahanoy. He is relieved after being in these solitary torture chambers for over 30 years. He can’t wait to face and embrace me, his wife, and his children and grandchildren. The next moment is for him to be released from the belly of the beast. He is surprised at how many men are in these prison cells – Black, white, Hispanic. He said he’s been shown a lot of love from the others in population. We need to bring Mumia and all the other men home!

Mumia said he wanted to see me as soon as possible, to come up tomorrow, Sunday, a visiting day. But the prison won’t let me visit until Monday.

Wadiya A Jamal, with BIG pride