“We will now criticize the unjust with the weapon.” – Comrade

Written Nov. 1, 2011 – In our struggle for freedom, that weapon has been and will continue to be Truth. I am a California prisoner who was sent involuntarily to NFORK CCA (the Corrections Corporation of America’s North Fork Prison), a private prison in Oklahoma, where I have been for over a year. California thought they could more effectively silence my protests and lawsuits by hurling me hundreds of miles away.

I am once again calling on the Bay View, i.e. Voice of the People:

On Oct. 11, 2011, a riot kicked off where Black inmates were fending off inmates from every other demographic. We faced insurmountable odds and some people were in critical condition afterwards, but the biggest odds against us has yet to be pointed out and is now working diligently to manufacture cover stories to conceal their liability; the odds I speak of is the role of CCA NFORK and COCF (Sacramento-based California Out-of-State Correctional Facility, a unit in CDCR, the California Department of Corrections and Rehabilitation) in setting the stage for such a catastrophic event to take place.

For years CCA NFORK has been operating under-staffed and unprofessionally with no consequences brought to them, even though, in the contract between CCA and COCF, it states that they are to maintain a sufficient number of staff to ensure the safety and security of inmates and staff, or they face indemnity and breach of contract.

The day of the riot it was apparent that they didn’t have the staff to curtail the aggression. They were so desperate for manpower they were using nurses to hold spray cans on those of us who made it out of the chow-hall and were being placed in restraints. In my 10 years in California prisons, I have never seen an MTA or nurse touch a spray can during or after a riot. The nurses couldn’t even carry out effectively their assigned duties and tend to the wounded because they had to adopt the role of security force against the people.

The memos they passed out soon after the riot provided insight into the cover story they are manufacturing. During feeding, inmates are to be instructed to go to the back of the cell and sit on the bunk, while two officers come around to feed, placing our food on the floor. They are trying to infer and imply that there was a more pressing need for staff safety as an explanation as to why it took over an hour to get to the injured and wounded. Failure to protect is an understatement! Tacked on to this is their deliberate indifference as they have falsely concluded that the Black inmates intentionally started a riot with Southern inmates, whose numbers consume nearly 60 percent of the inmate population.

How is such a racial disparity created in a facility, a reasonable person might ask? Intentionally, of course. In Alpha North, where I am housed, there are 29 Black inmates to 80 or so Southerners. And nearly every building is set up as such.

The beginning of this year they removed all the Northerners off the line and replaced them with nearly all Southerners. The stated reason was potential tension, gleaned through informants and kites, of a riot between Southern and Northern groups. After talking with the chief of security, lieutenants etc. about the increased racial disparity that is intentionally being catered to, I wrote a grievance to Warden F.E. Figueroa letting him know in no uncertain terms that there is an implicit failure to protect liability in the racial disparity alone.

It became obvious after my appeal was ignored that CCA NFORK and COCF have exchanged security for profits. The less staff a private institution has to hire, the more it profits. When that institution is allowed to operate understaffed, they guarantee a profit by not hiring the staff it would take to cover the gap to become properly staffed.

CCA NFORK and COCF have exchanged security for profits. The less staff a private institution has to hire, the more it profits.

For those of us like myself who have been sent out here involuntarily so that California can fabricate on the books a decrease of overcrowding, we have implicitly been asked to exchange comforts like Xbox, Playstation, hobbies and crafts for security. And the guise would probably still seem impenetrable, but for this riot.

Even though we are on lockdown and in our confined cells, we may be more vulnerable than ever if left in the hands of corporate think tanks and an obviously draconian COCF machine that would like nothing more than to quietly put back together their Frankenstein puzzle of quite a “functional” CCA/COCF institution.

The Milgram experiment (“a series of notable social psychology experiments conducted by Yale University psychologist Stanley Milgram, which measured the willingness of study participants to obey an authority figure who instructed them to perform acts that conflicted with their personal conscience,” according to Wikipedia) is seen all over again in regards to the prestige given the prison industrial complex that disables people’s right to question and demand the basic human necessity of rehabilitation.

The people have been taught to look at America’s prisons as such a necessity that an inherent legitimacy grows, in which legislatures, wardens, corrections unions etc. are allowed to treat prisoners as inhumanly as it takes to turn a profit or break what is seen as a rebellious spirit. The Greek concept of civil death has been resurrected in regards to prisoners.

Have our sentences ushered us out of the definition of what it means to be human? Has the privilege of humanity been taken off the list like an item on our commissary?

Have our sentences ushered us out of the definition of what it means to be human? Has the privilege of humanity been taken off the list like an item on our commissary?

Black and Brown must unite against our common enemy, the system

This is in regard to the unjust conditions and unsafe environment of a facility that is not capable of operating or containing a full scale riot. On Oct. 11, a riot between inmates occurred. The riot started in the kitchen and spread to almost every part of the facility.

This facility has operated understaffed for two years and the day of the incident, they were so understaffed that they used OJT (on the job trainees) who have not been properly trained as C/Os (correctional officers), C/Os from other facilities, C/Os on their day off and nurses to try and control the situation. It took over an hour and 30 minutes to do so, and at the height of the assaults some buildings were overrun by inmates with no thought on their mind but to kill anyone from the other side. The odds were overwhelming, and the staff who are assigned to insure our safety and security were confused and lost.

The day of the incident, they were so understaffed that they used OJT (on the job trainees) who have not been properly trained as C/Os, C/Os from other facilities, C/Os on their day off and nurses to try and control the situation.

The majority of us were forced out here (to CCA’s North Fork Prison in Oklahoma) by the aggressive “Involuntary Transfer” policy adopted by CDCR in response to the overcrowding in the CDCR prison system. By CCA being a private organization, profit is its top priority and everything else is second. 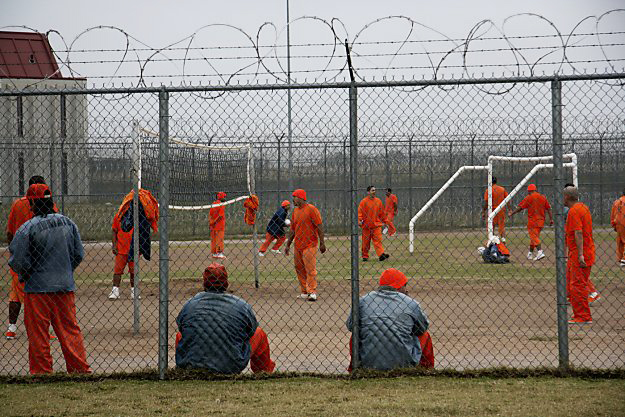 Thousands in damage was done to the facility, which Black inmates are being blamed for. It’s impossible to hold us responsible, as we were fighting for our life. But it seems to be easier to blame us because we’re all “savages” anyway.

The cover story they sold the media was that it happened over food conditions, but why would inmates riot with each other over food conditions? The food conditions were protested by our hunger strike in support of the California hunger strike two weeks prior, which many may not know took place because of the “sweep it under the rug” tactics used by CDCR and North Fork CCA so as to not affect its profit margin and image as a functional facility.

I have been here from the opening of this facility in 2008 to California inmates. My cellie, Anthony Robinson Jr., has continued to file Form 22s and 602s against this facility since his arrival in protest to the lack of preparedness, understaffing and political tricks being used to keep this facility running by the warden, the head of security and Oklahoma auditors.

The fact that inmates were able to take over buildings and controls to doors and were opening them to hurt inmates who were behind them is more than enough of a reason to bring light to the situation. Injuries ranged from minor to serious. Some inmates, including Kevin Hicks and Jabar Walton, were in critical condition. They say that the FBI has started a criminal investigation, but to what effect?

The facility seems to be more concerned about punishment and profit or loss. The main kitchen was partially destroyed, which made them cut back on food portions. They refuse to allow food purchases from canteen and the family package program in retaliation.

They say that the FBI has started a criminal investigation, but the facility seems to be more concerned about punishment and profit or loss.

The reason for the riot may never be known, but the more important issue is that this came at a time when we should be coming together. There are more serious concerns. Black and Brown relations need to come together! We have one common enemy which is the system!

Black and Brown relations need to come together! We have one common enemy which is the system!

Send our brother some love and light. Marcus Dalton and Anthony Robinson are cellmates, so Marcus can be reached in care of Anthony.