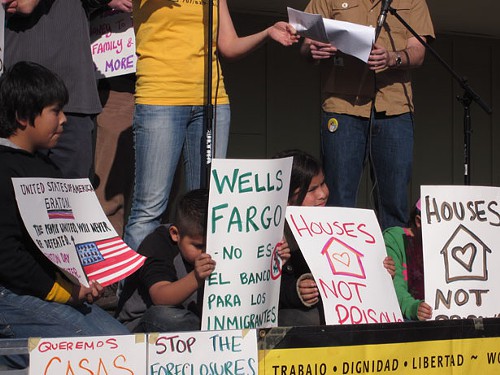 KPFA Weekend News Anchor: A coalition of immigrant rights and Occupy activists temporarily shut down two branches of Wells Fargo Bank in Santa Rosa on Friday to protest the banks’ lending practices, home foreclosures and involvement in the financing of private prisons. Seven protestors were arrested but all have since been cited and released. While the protest was underway, a Santa Rosa revenue supervisor told KPFA that the city currently does all of its day-to-day banking with Wells Fargo. KPFA’s Ann Garrison has more.

KPFA/Ann Garrison: The birth of America’s private prison industry may be traced to 1984, when, during the Reagan administration, the United States Immigration and Naturalization Service became the first federal agency to contract for private correctional services. Human rights activists have protested corporations profiteering on incarceration and the private prison lobby since.

On Friday, a coalition of immigrant rights and Occupy activists temporarily shut down two branches of Wells Fargo Bank in Santa Rosa and distributed a flyer charging that Wells Fargo profits from the private prison business now booming on increased immigrant detention. They also said that the bank received $43 billion in taxpayer-funded federal bailouts and then continued to foreclose on hardworking, taxpaying families rather than modify loans. 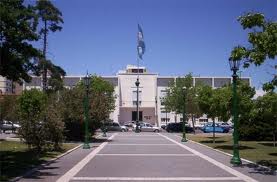 Specifically, the flyer said that Wells Fargo is an underwriter, major investor, trustee, financial advisor and more to the GEO Group, the private prison corporation formerly known as Wackenhut, and that Wells made contributions to politicians who sponsored and voted for Georgia’s HB 87, a copycat of Arizona’s SB 1070, the harshest anti-illegal immigration measure in recent U.S. history.

Santa Rosa is the largest city and the county seat of Sonoma County, where the U.S. Census last reported that the population is 16.3 percent foreign born and that 23 percent speak a language other than English at home. 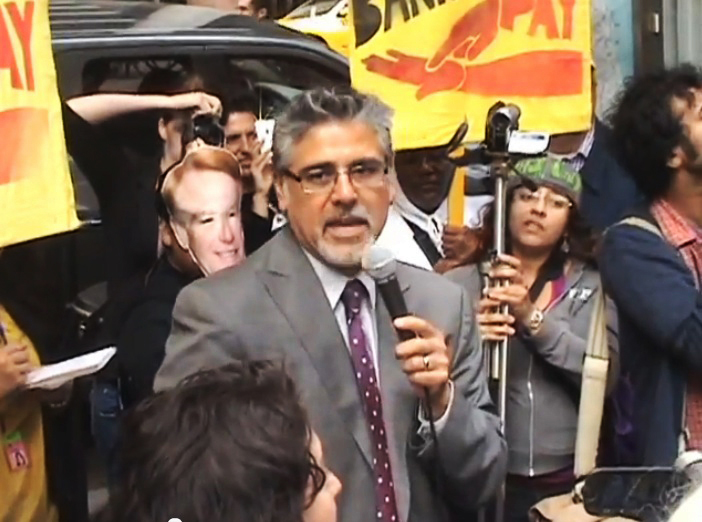 Immigrant rights and Dream Coalition activist Jésus Guzman, one of the speakers at the protest, also spoke to KPFA:

KPFA: Jésus Guzman said that the coalition had not yet called on Santa Rosa to move city funds into credit unions or create a municipal bank, but they hope to research both options.

Jésus Guzman: Again, that’s our money as taxpayers. If it’s going to Wells Fargo, then that’s something we want to find out, so we’re going to do some more research. And one of the best things to do is really investing it locally here.

KPFA: The City of San Francisco also takes its business to Wells Fargo and to Bank of America and Union Bank. And at San Francisco’s first hearing on the possibility of creating a San Francisco Municipal Bank, social justice advocates testified to both Wells’ predatory lending practices and private prison profiteering.