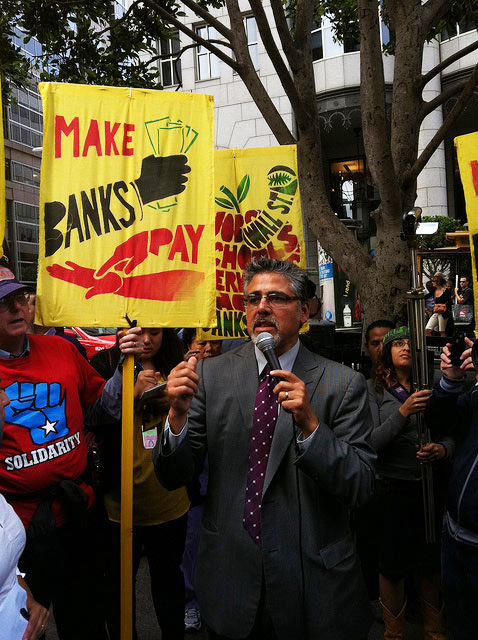 The campaign to “move your money” has gotten a groundswell of support. Having greater impact would be to “move our money” — move our local government revenues out of Wall Street banks into our own publicly-owned banks.

Occupy Wall Street has been both criticized and applauded for not endorsing any official platform. But there are unofficial platforms, including one titled the “99% Declaration” which calls for a “National General Assembly” to convene on July 4, 2012, in Philadelphia. The “99% Declaration” seeks everything from reining in the corporate state to ending the Fed to eliminating censorship of the Internet.

“[P]rotesters in the Bay Area, especially Occupy San Francisco, have something their East Coast neighbors don’t: a realistic plan aimed at the heart of banks. The idea could be expanded nationwide to send a message to a compromised Washington and the financial industry.

“It’s called a municipal bank. Simply put, it would transfer the City and County of San Francisco’s bank accounts – about $2 billion now spread between such banks as Bank of America Corp., UnionBanCal Corp. and Wells Fargo & Co. – into a public bank. That bank would use small local banks to lend to the community.”

The public bank concept is not new. It has been proposed before in San Francisco and has a successful 90-year track record in North Dakota. Weidner notes that the state-owned Bank of North Dakota earned taxpayers more than $61 million last year and reported a profit of $57 million in 2008, when Bank of America had a $1.2 billion net loss. The San Francisco bank proposal is sponsored by city Supervisor John Avalos, who has been thinking about a municipal bank for several years.

Weidner calls the proposal “the boldest institutional stroke yet against banks targeted by the Occupy movement.”

Responding to the critics

He acknowledges that it will be an uphill climb. In a follow-up article on Dec. 6, Weidner wrote:

“Of course, there are critics. … They argue that public banks would put public money at risk. Would you be surprised to know that most of the critics are bankers?

“That’s why you don’t hear them talking about the $100 billion they lost for the California pension funds in 2008. They don’t talk about the foreclosures that have wrought havoc on communities and tax revenues. They don’t talk about liar loans and what kind of impact that’s had on the economy, employment and the real estate market – not to mention local and state budgets.”

Risk to the taxpayers remains the chief objection of banker opponents. “There is no need for such lending,” they say. “We already provide loans to any creditworthy applicant who comes to us. Why put taxpayer money at risk, lending for every crackpot scheme that some politician wants to waste taxpayer money on?”

Tom Hagan, who pays taxes in Maine, has a response to that argument. In a Dec. 3 letter to the editor in the Press Herald (Portland), he maintained there is no need to invest public bank money in risky retail ventures. The money could be saved for infrastructure projects, at least while the public banking model is being proven. The salubrious result could be to cut local infrastructure costs in half. Making his case in conjunction with a Maine turnpike project, he wrote:

“Why does Maine pay double for turnpike improvements?

“Improvements are funded by bonds issued by the Maine Turnpike Authority, which collects the principal amounts, then pays the bonds back with interest.

“Over time, interest payments add up to about the original principal, doubling the cost of turnpike improvements and the tolls that must be collected to pay for them. The interest money is shipped out of state to Wall Street banks.

“Why not keep the interest money here in Maine, to the benefit of all Mainers? This could be done by creating a state-owned bank. State funds now deposited in low- or no-interest checking accounts would instead be deposited in the state bank.

“Those funds would be used to buy up the authority bonds and municipal bonds issued by the Maine Bond Bank. All of them. Since all interest payments would flow into the state treasury, we would end up paying half what we now pay for our roads, bridges and schools.

“North Dakota has profited from a state-owned bank for 90 years. Why not Maine?”

The state bank could generate “bank credit” on its books, as all chartered banks are authorized to do. This credit could then be used to buy the bonds. The government’s deposits would not be “spent” but would remain in the government’s account, as safe as they are in Bank of America – arguably more so, since the solvency of the public bank would be guaranteed by the local government.

Critics worry about the profligate risk-taking of politicians, but the trusty civil servants at the Bank of North Dakota insist that they are not politicians; they are bankers. Unlike the Wall Street banks that had to be bailed out by the taxpayers, the Bank of North Dakota invests conservatively. It avoided the derivatives and toxic mortgage-backed securities that precipitated the credit crisis, and it helped the state avoid the crisis by partnering with local banks, helping them with capital and liquidity requirements. As a result, the state has had no bank failures in at least a decade.

With intelligent use of the ever-evolving Internet, truly effective public oversight can minimize any cronyism. California’s pension funds might have avoided losing $100 billion if, instead of gambling in the Wall Street casino, they had invested in infrastructure through the state’s own state bank.

In Weidner’s Wall Street Journal article, he raises another argument of opponents – that California law forbids using taxpayer money to make private loans. That, he said, would have to be changed.

A municipal bank would be doing with the public’s funds only what Bank of America does now: It would be lending “bank credit” backed by the bank’s capital and deposits. The difference would be that the local community, not Florida or Europe, would get the loans; and the City and County of San Francisco, not Bank of America, would get the profits.

Better yet, they can be used to buy municipal bonds. Investing in municipal bonds would avoid the constitutional issue with “private loans” altogether, since the loans would be to local government.

Sending a message to Wall Street

The campaign to “move your money” has gotten a groundswell of support, but move your money into what? Weidner repeats the complaint of critics that private credit unions have gotten too big and threaten commercial banking. Having greater impact would be to “move our money” – move our local government revenues out of Wall Street banks into our own publicly-owned banks, which could then generate credit for the local economy and public works.

Ellen Brown is an attorney in Los Angeles and president of the Public Banking Institute. In “Web of Debt,” her latest of 11 books, she shows how a private cartel has usurped the power to create money from the people themselves and how we the people can get it back. Her websites are WebofDebt.com, where this story first appeared, and EllenBrown.com. She can be reached at ellenhbrown@gmail.com.