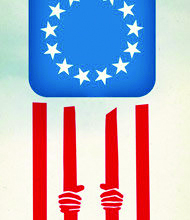 Critics of the NDAA have focused on Sections 1021, 1022 and 1023 that deal with counter-terrorism and allow the U.S. military to detain, arrest and interrogate U.S. citizens and legal residents without trial. Republican presidential candidate Ron Paul said, “Right now the battle against terrorism involves all of us, and everyone in this country is a potential terrorist.”

At the signing of the NDAA, Obama stated, “The fact that I support this bill as a whole does not mean I agree with everything in it. I have signed this bill despite having serious reservations with certain provisions that regulate the detention and interrogation of suspected terrorists.” The language in the bill leaves room for interpretation and brings into question key phrases such as associated forces, belligerent acts and covered persons. Nevertheless, the president stated he would “never authorize the indefinite military detention of American citizens and reject that suspects be tried in military instead of civilian courts.”

Initially, Obama warned the House of Representatives in the spring of 2011 that he would veto the bill if certain language was not changed. Before signing the act, Obama said the provisions changed were “minimally acceptable” and vowed to “use discretion when applying the provision.” However, since the legislation was signed, there has been serious concern from U.S. citizens and civil organizations that the legislation undermines legal rights protected by the Constitution by allowing the military to detain citizens indefinitely and without trail.

There has been serious concern from U.S. citizens and civil organizations that the NDAA undermines legal rights protected by the Constitution by allowing the military to detain citizens indefinitely and without trail.

Section 1021 of the NDAA on Counter-Terrorism states that the president can utilize armed forces for detainment of any “covered person” pending disposition under the laws of war. A covered person is “A person who was a part of or substantially supported al-Qaeda, the Taliban, or associated forces that are engaged in hostilities against the United States or its coalition partners, including any person who has committed a belligerent act or has directly supported such hostilities in aid of such enemy forces.”

Reading further in this 500-page bill, Section 1021 states in sub-section (e): “Nothing in this section shall be construed to affect existing law or authorities relating to the detention of United States citizens, lawful resident aliens of the United States, or any other persons who are captured or arrested in the United States.”

We must ask ourselves, who are U.S. coalition partners, and what is a belligerent act? Are American citizens belligerent who protest and rally under the First Amendment’s protection of their rights to freedom of speech, to peaceably assemble and to petition the government for a redress of grievances? Are we still protected by the Second Amendment: “A well regulated militia being necessary to the security of a free state, the right of the people to keep and bear arms shall not be infringed.”

The American Civil Liberties Union stated that regardless of claims by the Obama administration, “The statute contains a sweeping worldwide indefinite detention provision … (without) temporal or geographic limitations, and can be used by this and future presidents to militarily detain people captured far from any battlefield.”

“While President Obama issued a signing statement saying he had ‘serious reservations’ about the provisions, the statement only applies to how his administration would use the authorities granted by the NDAA, and would not affect how the law is interpreted by subsequent administrations,” the ACLU statement continues, maintaining that “the breadth of the NDAA’s detention authority violates international law because it is not limited to people captured in the context of an actual armed conflict as required by the laws of war.”

ACLU Executive Director Anthony Romero said President Obama’s action is “a blight on his legacy because he will forever be known as the president who signed indefinite detention without charge or trial into law.”

Section 1024 in the NDAA states an “unprivileged belligerent” can be held in long term detention whereas a “belligerent” can be represented by a military counsel. And until the unprivileged belligerent status is upgraded to a belligerent status he cannot have military counsel. The Center for Constitutional Rights stated that “the same presidential signature that ordered the closing of Guantánamo almost three years ago has now ensured their release or transfer is practically impossible.”

The NDAA has many interesting components: For instance, it forbids any foreign country from buying oil from Iran and sanctions the Central Bank of Iran to prevent production of nuclear weapons. In addition, it requires the Defense Department to report to Congress “on progress of the African Union in operationalizing the African Standby Force.”

Section 1091 of the Freedom of Information Act gives the Secretary of Defense the power to prohibit public access to information from the Department of Defense for what is deemed “critical infrastructure security information.”

The act allocates $100 million for anti-drug activities to Benin, Cape Verde, Gambia, Ghana, Guinea, Ivory Coast, Jamaica, Liberia, Mauritania, Nicaragua, Nigeria, Sierra Leone and Togo. It calls for the reduction of man-portable air-defense systems (MANPADS) that were used in Libya by so-called “terrorists” and to prevent their acquisition by terrorists.

A new amendment to the NDAA codified as Section 1091 of the Freedom of Information Act gives the Secretary of Defense the power to prohibit public access to information from the Department of Defense for what is deemed “critical infrastructure security information.”

Time will tell whether the NDAA will survive scrutiny by the courts and in the court of public opinion and meanwhile how the act will manifest itself in the U.S. and abroad. As Thomas Jefferson, who wrote the Declaration of Independence and served as the third president of the United States, asserted, “The two enemies of the people are criminals and government, so let us tie the second down with the chains of the Constitution so the second will not become the legalized version of the first.”