Update Feb. 15, 10 a.m.: Minister of Information JR Valrey interviewed Kendra Castaneda, wife of a hunger striker in the Calipatria ASU (Administrative Segregation Unit) and a fierce freedom fighter for all prisoners, on KPFA’s Morning Mix 8-9 a.m. today. They discuss the progress of the hunger strikes, the ongoing strike in the Corcoran ASU and the death of the first known hunger strike martyr, Christian Gomez, to whom JR dedicated the show. Listen here (the interview starts 8 minutes in):

Families of prisoners who knew Christian, witnessed his death or have any relevant information about him or the Corcoran hunger strike are urged to email Kendra direct at kendracastaneda55@gmail.com.

We urge all readers to

In an email received by the Bay View at 9:09 this morning, Manny Espinoza wrote: “My brother knew the man that died. He said the COs didn’t get to him on time. My brother was sick and ask, yelled for help but nothing. He passed out and his celly yelled and banged on the bars to get my brother help.” On Feb. 10, Espinoza had written, “This hunger strike is still going on and the COs do not care! Please send people to check on these men PLEASE!!!”

The Bay View encourages anyone with more information about this desperate situation to call us at (415) 671-0789 or email editor@sfbayview.com.

Update Feb. 10, 7:30 p.m.: Sal Rodriguez of Solitary Watch reports: “While the cause of death and its possible relationship to the hunger strike remains unconfirmed, (CDCR spokesperson Terry) Thornton responded to questions from Solitary Watch with an apparent affirmation that an inmate death had taken place and the statement: ‘I do not know the results of the autopsy.’

“In response to a phone call, Tom Edmonds, chief deputy coroner in Kings County, confirmed that inmate Christian Gomez died on Feb. 2 at Corcoran but also did not share the cause of death.”

CDCR’s Inmate Locator lists Christian Alexander Gomez, 27, CDCR No. G-07338, at Corcoran State Prison. Anyone with more information is invited to contact the Bay View at editor@sfbayview.com, 4917 Third St., San Francisco CA 94124, or (415) 671-0789 any time. Our deepest condolences go to the family, friends and comrades of the martyr, Christian Gomez.

Although media coverage of the event has been scarce, prisoners in the Administrative Segregation Unit (ASU) at Corcoran State Prison continue a hunger strike that has lasted over a month. In a statement released in late December, representatives of the strikers listed 11 demands that include access to educational and rehabilitative programming, adequate and timely medical care, and timely hearings on their cases and petitions.

As of Feb. 9, the California Department of Corrections and Rehabilitation (CDCR) disclosed that 30 men were still striking and a representative in the office said that prisoners had been intermittently striking for the last month. Unlike the California prisoner hunger strikes of July and September, little attention has been given to the ongoing strike at Corcoran.

Family members and advocates fear strikers may be experiencing serious medical issues and even death. A prisoner at Corcoran, who remains unnamed due to fear of reprisal, stated in a letter received on Feb. 5: “On or about Feb 2nd or 3rd 2012 an inmate has passed away due to not eating that has been going on over here in Corcoran ASU. Inmates are passing out and having other medical problems and it seems that this is not being taken seriously. There will be more casualties if this isn’t addressed or brought to light.”

While this death is unconfirmed, it raises concerns that the CDCR is failing to deal with this hunger strike in an appropriate manner. “The prisoners are making very reasonable and legitimate demands regarding basic human rights,” says Carol Strickman, a lawyer working on behalf of some hunger strikers in California. “For those of us on the outside, the slow pace of reform is frustrating. For those people enduring barbarous conditions, the lack of meaningful improvement is unbearable.” 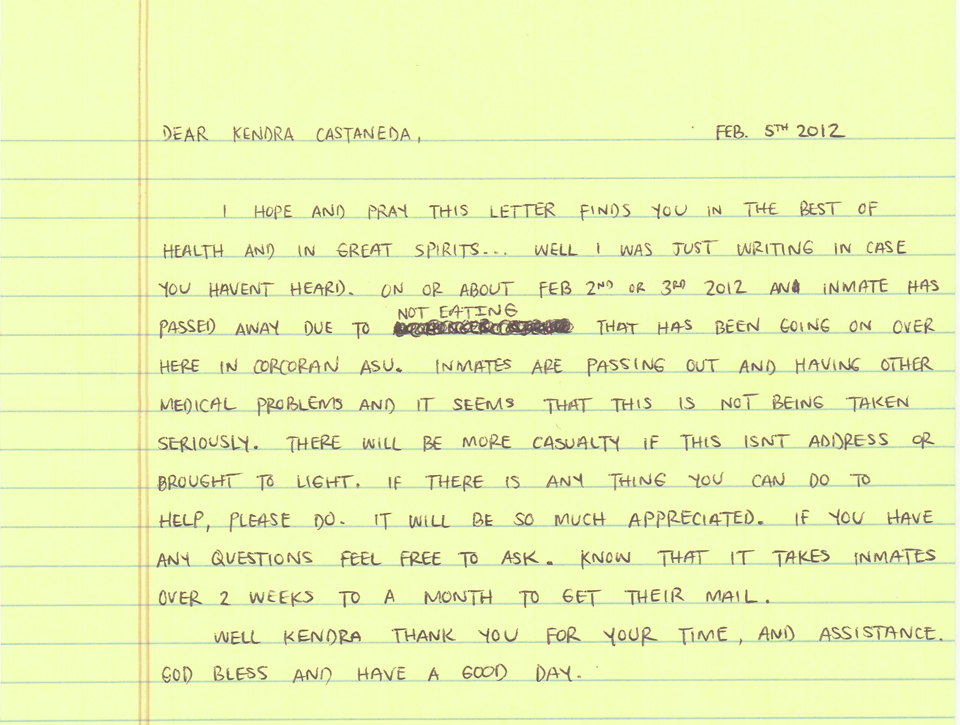 The demands of the Corcoran strikers are somewhat different than those of the strikes sparked in Pelican Bay State Prison’s Security Housing Unit (SHU) this past summer and fall, which at one point included 12,000 prisoners in 13 prisons across California. Administrative Segregation Units are often used as holding places for prisoners in route to SHU facilities or who are waiting release back into general population. Many prisoners in the various ASUs in California have been validated as gang members by CDCR and languish, sometimes for years, awaiting transfer to facilities such as Pelican Bay, where some prisoners have spent more than 20 years in solitary confinement.

Following the September hunger strike and significant pressure from the public and legislators in Sacramento, the CDCR announced that it would make changes to its gang validation procedure and would release a draft for review by stakeholders sometime in January. “The CDCR is clearly behind on their timeline. Meanwhile, prisoners continue to be validated largely due to association and baseless allegations effectively dooming them to indefinite SHU sentences without any means of challenging their cases,” says Azadeh Zohrabi of the Prisoner Hunger Strike Solidarity coalition. The stakeholders’ review will reportedly involve the California Correctional and Peace Officers Association (CCPOA), state legislators and prison advocates.

Lawyers, families, and advocates will continue to monitor the situation at Corcoran. For updates and further information, please visit www.prisonerhungerstrikesolidarity.wordpress.com.

Activist Kendra Castaneda, who first heard the news of this tragic death and notified the coalition, writes:

Please put the pressure on CDCR before someone else dies.

“Please put the pressure on CDCR before someone else dies. This could be your loved one or family member. Please help:

“Email or write or call asap to Matthew Cate and demand that he meet these prisoners’ demands. Write or call Corcoran Warden C. Gipson and email or call Nancy Kincaid to make sure these men are receiving proper medical treatment while on their hunger strike.”