The death of Christian Gomez, first martyr of the California hunger strike, was the top story on Democracy Now! for Feb. 24, 2012, broadcast on 1,024 TV and radio stations around the U.S.

Feb. 23, 2012 – The family of Christian Gomez, the 27-year-old prisoner who died while on hunger strike at California’s Corcoran State Prison, is speaking out about the loss of their family member in the hope that similar incidents in the future are avoided.

Christian Gomez had not told his family members of his intentions to participate in the Jan. 27-Feb. 13 hunger strike held by ASU inmates in protest of their conditions. According to an interview with Gomez’ sister, Yajaira Lopez, she “found out when the coroner, Tom [Edmonds], implied that there was a possibility of a chemical imbalance due to a hunger strike he was participating in. That’s the first I heard of this. Back in September or October when he first was transferred there, he did tell me that they were having a hunger strike to fight for their rights, but he was in general population.”

The family says that Gomez had high blood pressure, thyroid and kidney problems. According to Lopez, before being sent to Corcoran he had been incarcerated at High Desert State Prison for four years. “He told me things were a lot different at this prison and that he didn’t receive the same medical attention he received over at High Desert,” she said.

Gomez was found unresponsive in his cell at an unconfirmed time on Feb. 2. Reports from other inmates indicate that they had pounded on their cell doors and screamed to get the attention of the correctional officers. He was declared dead at Corcoran District Hospital at 12:22 p.m. 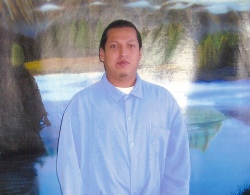 According to Lopez: “My mother received the call of my brother’s death on Thursday, Feb. 2, 2012, at approximately 1 p.m. She then called me hysterically and that’s when I went over to her house. When I got there, I asked her who called and she said someone from the prison. [I] asked her if they gave her a number where we could call to obtain more info and she said no. They told her that she would receive a letter in the mail explaining everything and where we could claim the body … I was so upset that things were being handled this way; for God sake, we were talking about a human being, not an animal.”

“They told her that she would receive a letter in the mail explaining everything and where we could claim the body … I was so upset that things were being handled this way; for God sake, we were talking about a human being, not an animal.”

In a phone call with Solitary Watch, California Department of Corrections and Rehabilitation spokesperson Terry Thornton confirmed that Gomez had been placed in solitary confinement in the Administrative Segregation Unit (ASU) pending investigation of assault on another inmate with a weapon on Jan. 14, 2012. Thornton would not confirm the status of this investigation.

The Bay View has received an as yet unconfirmed report that Gomez had not been charged and the investigation had concluded that he had not committed the assault.

According to CDCR, Gomez was serving a life sentence for first degree murder and attempted murder, but his sister suggests he may have been wrongfully convicted. Asked how she would like people to remember her brother, Lopez responded: “He was a genuine person that had not lost hope in the system. He knew that he would eventually get out. Although he had made bad choices in who he hung around with, he didn’t murder anyone. The witnesses in his case never identified him. On the contrary, but yet he was still convicted. Unfortunately, we couldn’t afford a good attorney and he got screwed.

“He didn’t murder anyone. The witnesses in his case never identified him. On the contrary, but yet he was still convicted. Unfortunately, we couldn’t afford a good attorney and he got screwed.”

“He always had a big smile when we visited him and never discussed how bad things were in there to not worry us. He always said he was fine. Even in the last letter he wrote on Jan. 30, which my mom received on Feb. 3, he wrote that he was fine.”

Sal Rodriguez, reporter, researcher and social media manager for Solitary Watch, where this story first appeared, can be reached at rodrigsa@reed.edu. Bay View staff contributed to this story. Photos courtesy of the family of Christian Gomez.