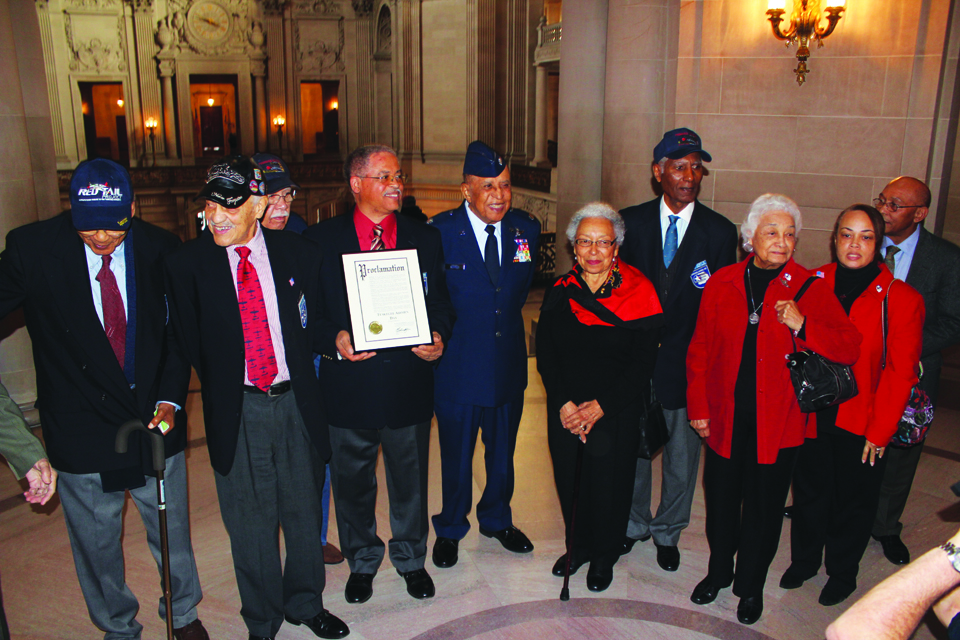 “Red Tails,” the new George Lucas film depicting the exploits of the Tuskegee Airmen, is to the history of Black fighter pilots during WWII what a sunset is to a day: It’s pretty to watch but no illumination is forthcoming.

However – and with all due respect – for those of us who wrote their high school book reports after reading the Classic Comics version or watched the Disney Channel version and, perhaps even more worrisome, for those of us who may be Tyler Perry fans, then “Red Tails” is surely a must see.

For those, however, who took the time to read a book or take seriously African Americans’ participation and contributions to everyday life probably will want to take a pass. “Red Tails” is decidedly not another “Glory,” the 1989 Morgan Freeman film that was relatively accurate in its telling the story of the Massachusetts 54th Regiment, the first all-Black infantry unit of the Civil War.

“Red Tails,” so named because the Tuskegee Airmen painted the tails of their planes red, is a cartoonish caricature of great fighting men who contributed much to the world’s titanic struggle against fascism that was WWII. But who, according to Lucas and film writers John Ridley (“Under Cover Brother” and Fox News contributor) and Aaron McGruder (“Boondocks”), had no personal relationships with family or Black women – not one Black woman appears in the film – and who were hopelessly criminal in their refusal to follow orders and complete a mission as assigned.

To be fair, all the exploits attributed to the Black pilots in “Red Tails” are absolutely true. Black pilots were originally assigned to strafing duty, the most dangerous of all air assignments, with outdated planes. They did blow up an ammunition train. They did destroy a German airfield, and one airman was among the first allied pilots to shoot down an ME (Messerschmitt) 262 fighter jet.

But for purposes of calming and soothing the qualms of Lucas’s financial backers and film industry banks who feared a film with a nearly all-Black cast would bomb – figuratively speaking of course – at the box office, all these exploits are depicted as being carried out by one lone rogue pilot, a pilot so undisciplined and uncontrollable that in real life he would have been subjected to court martial and likely expelled from the service.

Actually in real life the 332nd all-Black fighter group was assigned to clear the sea-lanes and provide air cover for the Allies’ invasion of Sicily. In the film, key members of the 332nd abandon their mission to provide air cover and criminally wander off to bomb a German airfield. Progressive military leaders don’t like to stifle self-initiative, but David Oyelowo’s role as Joe Little, rogue fighter pilot, was beyond anything reasonable or credible. Those kinds of stunts are far more suited to Saturday morning television, at which McGruder is quite successful.

Far in excess of the cartoon caricatures that are the Tuskegee Airmen in “Red Tails” are the embarrassing, emasculated 332nd squadron leading characters assigned to Terrence Howard and Cuba Gooding Jr.

Gooding is particularly annoying as an eternally pacific, pipe-smoking mentor to his young protégé pilots. But what he comes across as is nothing more than a pretentious MacArthur wannabe, never personally putting himself in harm’s way and never taking the damn pipe out of his mouth. Meanwhile Howard’s character, Col. A.J. Bullard – a nice tip of the pilot’s cap to Eugene Bullard, a Black pilot who flew for the Lafayette Esquadrille during WWI – is a thinly disguised representation of the Tuskegee Airmens’ primary leader, Lt. Col. (later Gen.) Benjamin O. Davis. In “Red Tails,” both Howard and Gooding are little more than administrative pencil pushers far removed from any form of combat and would more appropriately have been costumed in aprons and granny hats rather than flight jackets.

In reality, Davis and other senior flight squadron officers all had their own planes and fully participated in combat missions. This was true not just in the Black units but all the white units as well. During WWII the Army Air Corps was an OJT air force. For everyone it was an on the job training because military air science was a new field and few knew very much about it.

Importantly Davis’ plane was named “By Request,” because after the Red Tails became known for providing particularly close protection for bombing raids and bomber groups’ losses diminished, they were requested specifically by the white bomber groups for protection.

As a matter of course, the actors can’t be blamed for the miserable script that was handed them. We have to assume they did the best they could.

Curiously, the “Red Tails” episode that raised the biggest question centered on the pilot shot down, captured by the Germans and taken to prison camp. What followed on screen was apparently cut and pasted from the 2002 Bruce Willis vehicle, “Hart’s War,” which featured Terrence Howard as the downed Tuskegee man.

A far more revealing episode could have been provided about the two Red Tail pilots who actually were shot down over Yugoslavia, rescued by an armed patrol of the Yugoslav Communist Party and repatriated to the Allies on the Italian border. But those kinds of political points are not attractive to film writers and producers sucking up to the banks.

But Ridley and Lucas somewhat redeem themselves.

In an interview with the Wall Street Journal, Ridley relates that in the run-up to actually writing the Red Tails story, Lucas provided him with a van full of newspaper and magazine articles and military combat and personnel records that took months to research and review.

However, where Ridley’s research paid off remarkably well was in the making of the “Red Tails” companion piece, “Double Victory: the Documentary.”

Here the real and nearly complete story of the Tuskegee Airmen’s struggle against fascism overseas and racism at home is honestly and inspiringly told. It ranks among the very best, if not the best documentary ever made telling the role of Black military men in WWII.

Black women’s role as spiritual and material sustainers of the Black pilots as wives and girlfriends is fully revealed. We learn that when the first class of Tuskegee Airmen graduated, Lena Horn attended the dance that followed and danced with every graduating cadet. We get misty eyed when one former Red Tail, now in his mid-80s, tells us that after the first graduation dance, he walked his girlfriend home and asked, “Will you fly with me for the rest of our lives?” Yes, she said.

“Double Victory: the Documentary” is absolutely everything “Red Tails” is not. It’s the only redeeming aspect of the main feature. This is the film everyone absolutely should see.