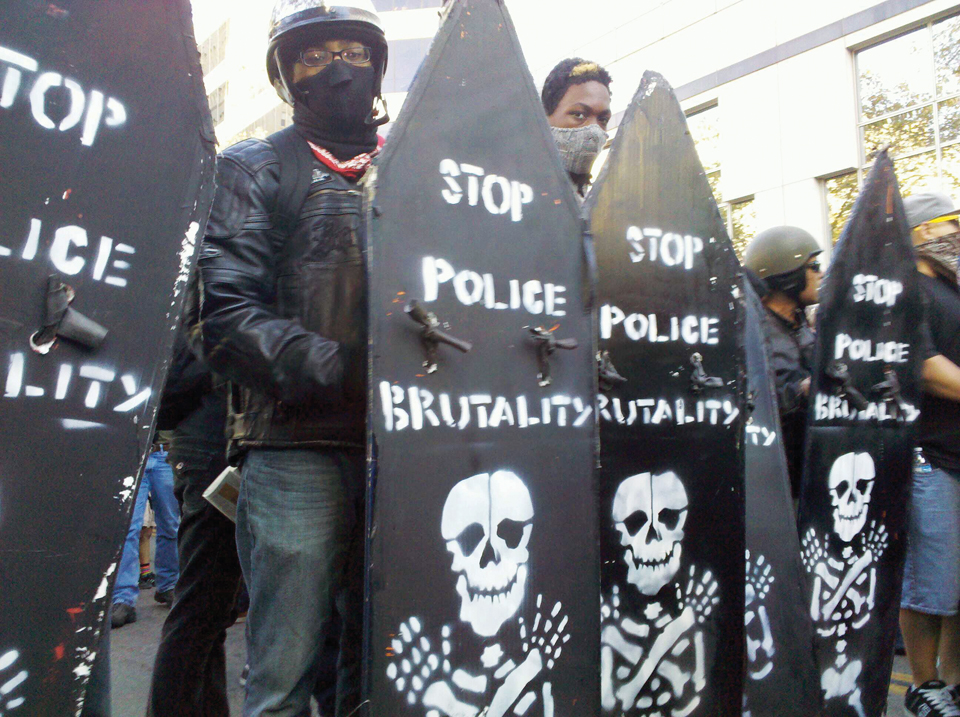 We are writing in regards to any misconceptions you may have regarding last Saturday’s (Jan. 28) Move-In Day to reclaim the unused Henry J. Kaiser Convention Center. We have had to brave a heavy campaign launched by the city and the mainstream media to discredit us, and unfortunately some within our ranks have taken such misrepresentations at face value. We hope that this statement can help clear things up.

We remember how beautiful we all were on our march, a diverse crowd of thousands coming together to turn an unused building into a social center and a new home for Occupy Oakland. We had a children’s brigade at the back and a line of shields in the front, and a celebratory crew of comrades in between. We should be emboldened that there are so many of us out there who are willing to take such action together and, like the General Strike and the Port Shutdown, see it as sign of what we can do when united in purpose and solidarity.

Yes, we were met with the heavy hand of the police state when OPD chose to turn our peaceful march into a war zone. But one fact that should not go unnoticed is the courage and resiliency we demonstrated on the streets that day. Whether it was advancing behind our shields towards a militarized police force, tearing down fences to escape a police kettle while being tear gassed, escaping through the YMCA to avoid arrest (thank you to whoever it was who let us in!), using a fire extinguisher as a smoke screen to assist the escape of those who were in City Hall, or attempting to free our comrades being transferred to the Glen Dyer Detention Facility, the people of Oakland showed what we are capable of and what we can become. Above all, we demonstrated to the city and its rogue police force that we will not be intimidated or scared by their tactics, when we know that we have each other’s backs.

Let it be clear: We are not victims of police brutality but survivors of it. There is no question that we demonstrated militant resistance to the police last Saturday. It is only natural to do so when our best intentions of creating a new world our met with such hostility. This time, the chant “When Oakland is under attack, what do you do? Stand up! Fight back!” was not an empty one. At the same time, it should also be clear that there is nothing preventing those who want to from organizing non-violent direct actions autonomously with clear guidelines as such. This is what we mean by diversity of tactics.

We recognize that there are communities who were affected in the neighborhoods where the conflicts with the police took place. We did outreach all over Oakland before the action and will continue to offer support and solidarity to those who might have been negatively affected or traumatized by the OPD’s inexcusable actions. What we saw in the streets of Oakland on the 28th was overwhelming support, whether it was bystanders bringing us water to wash off tear gas, waving and cheering us on, honking from their cars, or coming down from their apartments to join us. We experienced solidarity first hand rather than percentage points in a poll.

The OPD and the city claim that we are outsiders and that we are not from Oakland – even as 93 percent of OPD officers live outside Oakland. These lies are transparent to anyone who comes to our marches and assemblies and sees their friends and neighbors next to them. And those who came in solidarity last Saturday, from across and all around the Bay, from Dallas to Los Angeles, they are us and we are them. They are our comrades and no city press release can come between us. Our heart goes out to them and all the Occupies – over 26 at last count – who organized solidarity protests within 24 hours of the mass arrests on the 28th. We love you in the deepest meaning of the word.

The OPD and the city claim that we are outsiders and that we are not from Oakland – even as 93 percent of OPD officers live outside Oakland.

From its inception, Occupy Oakland has been about taking direct action and defending ourselves and what we reclaim to the best of our abilities. It has always been about people providing for each other and working to build radical alternatives to the patriarchal capitalist system, and it is in this spirit that we move forward together. No one comes from some “outside” in order to mess with our Oakland, other than the suburbanite riot police. We come from here and everywhere, and in our movement those who join us are all insiders, agitating together towards a better Oakland, a better world.

To be sure, many of us are frustrated about the tactical mistakes made throughout the day, and we have to learn from these as we advance. There are many questions and criticisms coming from our broader community, and we welcome your help in transforming these into better strategies for future actions. We have to learn how to take over buildings in an effective and intelligent manner. We have to learn how to move cohesively through the streets, to take offensive and defensive initiatives, to improve communication in highly charged situations.

Critiques are important but we want everyone to understand the difficulty in undertaking such an initiative in the face of such forceful police response. The state fears that one successful building takeover will lead to another. It has nightmares of whole blocks of vacant buildings put to use as social centers and nodes of resistance, inspiring those in other cities to do the same. Despite the knee-deep shit that the OPD is in right now, when it comes to challenging property relations, all bets are off and the leashes are cut.

The state fears that one successful building takeover will lead to another. It has nightmares of whole blocks of vacant buildings put to use as social centers and nodes of resistance, inspiring those in other cities to do the same.

We are dumbfounded by those who accuse us of working solely to create a spectacle, a confrontation with the police, or not being genuine in our stated goals. We are the same people who through the course of a month planned a two-day festival to launch our new home, collected and wheeled the many supplies to make it a comfortable and safe space, crafted well thought out guidelines of behavior and exclusion for inside the building to address the gendered violence we saw at the camp, and drew up defense strategies against police raids. 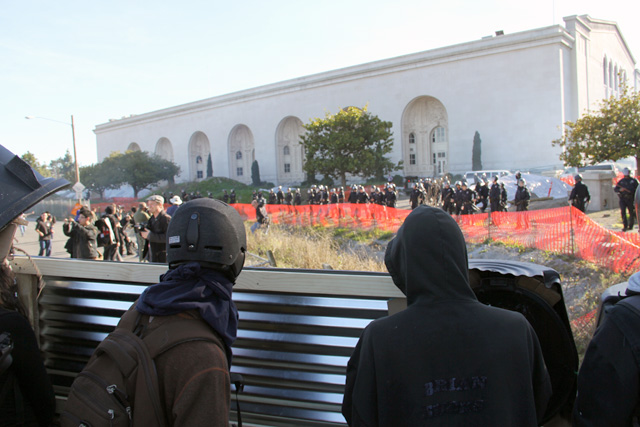 Was it a gamble? Of course it was, just like setting up our camp at Oscar Grant Plaza on Oct. 10 or calling for a general strike with a week’s notice or shutting down the ports. Most every action we plan is filled with risks and unknown factors. Accuse us of naiveté if you must – and then join us in forging better actions – but do not accuse us of malice or hidden motivations.

As we continue to reflect on the actions of last Saturday, we need also to remember that many in our community are in pain and trauma, and we need each other’s support and care. More than 400 of us were imprisoned last weekend. Some of us have yet to be released, are facing trumped-up felony charges, or have been given unconstitutional stay-away orders.

The abuse we faced behind bars needs to be told and retold, as it not only shows yet another side of the repression of dissent but the everyday brutality of the prison industrial complex on all prisoners. What has not been sufficiently recounted is the solidarity we experienced with each other within the walls and cells designed to separate and isolate us. When we came out of Santa Rita, we did not want to go home but joined the dozens of comrades outside waiting for the rest of us, cheering each releasee, feeding them and nourishing them with food and comfort.

But much more importantly, the time we spent on the inside was a stark reminder of what and why we are fighting. Across the world millions of prisoners languish in prison; in California alone there are nearly 200,000 prisoners, overwhelmingly people of color, as a result of the institutionalized racism of the justice system. In Santa Rita we met some of these inmates who gave us words of support and encouragement. When we converge outside of San Quentin on Feb. 20 for our Occupy in Support of Prisoners action, we will have those prisoners in our hearts.

The time we spent on the inside was a stark reminder of what and why we are fighting. In California there are nearly 200,000 prisoners, overwhelmingly people of color, as a result of the institutionalized racism of the justice system. In Santa Rita we met some of these inmates who gave us words of support and encouragement. When we converge outside of San Quentin on Feb. 20 for our Occupy in Support of Prisoners action, we will have those prisoners in our hearts.

The broader Occupy Oakland community needs to know that we are not finished and that we continue to plan for future building reclamations and other actions. We realize that we have a way to go and need to continue outreach, build and repair bridges, and expand our movement, which after all is always a beautiful work in progress. We welcome your feedback and constructive criticisms as we learn from our missteps and move forward together. Please come and join us!

With love, vigilance, and solidarity,

The Move-In Assembly was created on Dec. 24, following a proposal passed at Occupy Oakland’s General Assembly. It has been holding open assemblies of approximately 80 people twice a week since Dec. 28. Learn more at Occupy Oakland Move-In Day, where this story first appeared.