At his ground-breaking Feb. 15, 2012, press conference, San Francisco Assessor-Recorder Phil Ting announced “the first audit of foreclosure records in the state of California.” This nationally publicized report, ‘San Francisco Assessor Uncovers Widespread Mortgage Industry Irregularities,’ revealed that laws were not followed and that “the neighborhood … hit the hardest was … the Southeast part of town, which is very diverse, probably the lowest amount of income area of San Francisco.”

RealtyTrak, a website for foreclosure listings, and ACCE, the Association of Californians for Community Empowerment, headquartered in Los Angeles, both claim that more than 1,400 homes in the 94124 ZIP code – Bayview Hunters Point – will be foreclosed by 2012.

Housing activists say that through soaring housing prices, Ellis Act evictions and the current foreclosure rip-offs by banks and other lenders, San Francisco’s African-American population has been ethnically cleansed from 13.4 percent in 1970 to about 3.9 percent today.

RealtyTrak, a website for foreclosure listings, and ACCE both claim that more than 1,400 homes in the 94124 ZIP code – Bayview Hunters Point – will be foreclosed by 2012.

In conjunction with Aequitas Compliance Solutions of Newport Beach, Ting’s office sampled 2,405 foreclosure sales between January 2009 and October 2011. In each of 382 records, at least one violation of law was exposed. 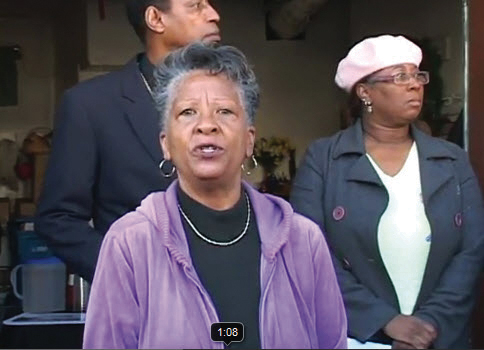 Ting cited “suspicious activities” – backdated documents or documents submitted on behalf of organizations bankrupted years before along with multiple other violations.

These statistics were no surprise to foreclosure victims in San Francisco’s Bayview Hunters Point, Bernal Heights, Excelsior and Portola neighborhoods. According to Mesha Monge-Irizarry, whom Bank of America threatens to evict from her home, “There are 14 bank-owned home foreclosures in the Bayview on Quesada Avenue alone in a three-block range.”

Mesha notes that the foreclosures mostly target elder Bayview women of color who, because of their age, are not expected to fight back – a serious miscalculation on the part of predator banks. Bayview Hunters Point has long had San Francisco’s highest rate of homeownership by far. The thousands of Blacks who came from the South to work in the Hunters Point Shipyard during World War II made homeownership their first and foremost objective.

Grace Martinez of San Francisco ACCE, an organization that keeps people in their homes, stated there are at least four Bayview women in their 60s and 70s living on the same block since they were kids. These foreclosure fighters gather regularly at 75-year-old Vivian Richardson’s home to compare notes in their foreclosure battles with Bank of America, Wells Fargo, Citi and other banks.

The energetic, graceful Ms. Richardson, 13 years at 1479 Quesada and a victim of predatory lenders, began successfully “standing up for myself and for others,” helping them stop their illegal foreclosures.

Eleven homes on the block of Quesada shared by Vivian and Carolyn Gage either have been or are being foreclosed upon.

Carolyn has been an established community member for over 50 years. A former deputy sheriff, soft-spoken and dignified, she is equally determined. “We are union members and home owners,” she observes. “We have been financially assaulted.”

When high interest rates on a $250,000 loan inflated it to $525,000, a Bayview Mortgage Capital foreclosure drove her from her home. But ACCE helped her re-occupy it. Following Carolyn’s re-occupation, the mortgage company committed to re-opening her case and cooperating with her to keep her residence.

Mesha lives at 900 Ingerson, near Carolyn and Vivian. An embezzlement scheme six years ago to steal her home ultimately failed. On July 15, 2011, property title was returned free of any mortgage by San Francisco Superior Court. She had owned the home free and clear before the embezzler mortgaged it. Nevertheless, on Sept. 1, 2011, through predatory manipulation, Bank of New York seized title, transferring it to Bank of America. 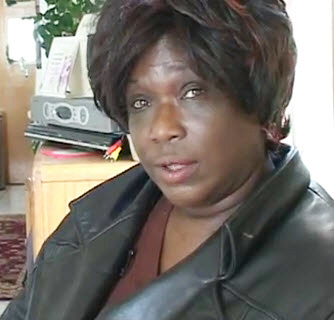 “Bank of America put a note on my yard door saying, ‘This property has been deemed vacant and abandoned. In a few days, the water will be shut off and the locks will be changed.’

“There is a plan,” she asserts. Her attorney will file a motion on Bank of America to cease and desist. Mesha will file a restraining order.

“If they change the locks, I will call my attorney, then the alternative and corporate press. Once they’re at the house, I’ll call the sheriff and the police saying, ‘I’m trespassing. I just broke into my property. Come and get me.’

“It’s not to draw attention to my little person. It’s a generic effort to show that foreclosure freedom fighters are not lame elders and frail and sick people or people who are just defaulting on their loan. We are fighting back, and we are going to win.”

The Occupy Movement has spawned a powerful nationwide backlash against foreclosures and spun off assertive re-occupations by owners of their foreclosed homes. Vivian Richardson was inspired to her activism by an Oakland resident re-occupying her house.

New action groups are forming and working together, taking back many foreclosure victims’ homes.

Occupy Bernal is fighting the foreclosure of six neighborhood families, negotiating with Wells Fargo for principal reduction and a reasonable accommodation to keep people in their homes, pressuring Wells Fargo for a moratorium on all foreclosures.

He feels the city’s multicultural wonders are being stolen by banks and powerful people who would rather amass wealth than care for their communities. They cycle money out, leaching vibrancy from close-knit neighborhoods.

Bob’s 15-year-old son is “an amazing kid” at the School of the Arts. “He has a crazy, wonderful, eclectic group of friends” with many struggling families who should be able to stay in this city. We shouldn’t sacrifice them for the monetary gain of a handful of people not contributing. 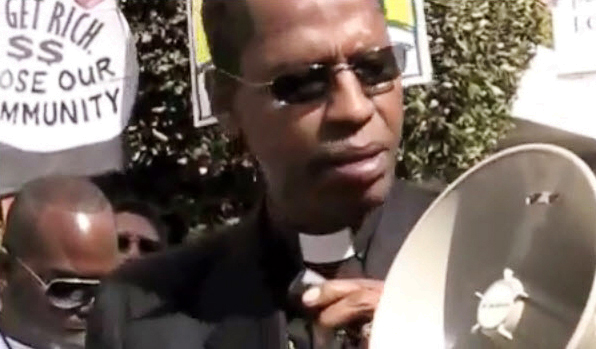 Archbishop Franzo King, who attends the meetings at Vivian Richardson’s home, is the pastor of St. John Coltrane African Orthodox Church at 1286 Fillmore. King fell victim to an unfair foreclosure now under investigation by D.A. George Gascon. On his Bayview Hunters Point home two blocks from Mesha Irizarry, he took a risky “option ARM loan” – also known as a pick-a-payment loan. In lawsuits against banks, these were found to be predatory loans because banks neglect to explain the dangers of ballooning mortgage debt. Initial minimum payments are extremely low but, after five years, rocket skyward to lower the total balance. King was offered the option of refinancing his loan later. However, his mother’s death and wife’s disability diminished his income. His refinance request was denied.

On a sunny Saturday, Feb. 25, 2012, at the top of Russian Hill overlooking San Francisco Bay, ACCE, the Occupy SF Housing Council and Occupy Bernal took the protest directly to the perpetrator. They held a mock auction of Wells Fargo CEO John Stumpf’s top floor luxury condo at Chestnut and Larkin.

From the crowd, Archbishop King wryly chided the Wells Fargo bankster: “Mr. Stumpf, your stumpfing is over. No more stumpfing on the poor!”

Wells Fargo is one of the five predator banksters whose CEO lives in San Francisco.

Tenant’s Union Executive Director Ted Gullicksen explained that ACCE, Occupy SF Housing and Occupy Bernal repeatedly tried to reach John Stumpf regarding Wells Fargo’s tenant and homeowner evictions and foreclosures, “particularly a couple of people in Bernal Heights who have been trying to work with Wells Fargo to get their mortgages readjusted.”

Because it’s been all to no avail, they held protests occupying numerous Wells Fargo branches.

“Now we’re escalating this, taking our protest to John Stumpf’s very nice home overlooking the Bay in one of the richest parts of San Francisco.” He cares a lot about his home, observed Gullicksen. But offering predatory loans without disclosure says he does not care about others’ homes.

“People did not know what was going to happen to them, and they are being needlessly kicked out onto the streets. It’s all because of the actions of John Stumpf and the other high executives of Wells Fargo.”

He declared Occupy San Francisco Housing and Occupy Bernal will continue escalating. They will stop all Wells Fargo home auctions on City Hall steps conducted with the auctioneer and a dozen or so investors who are looking to buy them. “It’s pretty easy to stop them and shut them down with 10-12 or so people creating a disruption.”

The disruption alone accomplishes two things: It is impossible to continue the auction. It also makes the potential investors leery of bidding on a home in the midst of conflict, especially if claims are raised of possible misdeeds in the mortgage or cloud on the title.

Even if they foreclose on people, disrupters will make sure they can’t sell homes to anyone, he said. “We will continue to occupy THEIR homes until they let us keep OUR homes.”

An attempt was made at one auction to avoid disruption by moving into the War Memorial Building. But Sheriff Ross Mirkarimi came out and said, “No, you can’t do that. That’s city property, and you can’t be doing these auctions on city property.” When they tried to get away from disrupters, they ended up having to close down the auction.

Carol Harvey is a San Francisco writer and videographer whose work is published by many Bay Area periodicals. Email her at carolharveysf@yahoo.com.