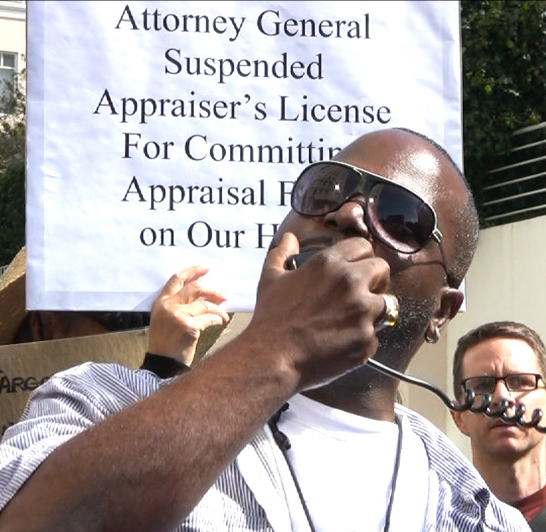 On Friday, March 16, a rally will be held at 10 a.m. at 1335 Quesada Ave. in Bayview Hunters Point, San Francisco. Please come out and support as Dexter Cato and his family, longtime community members, reoccupy their home that was criminally foreclosed on. We want to send a message to bloodsucking predatory banks and their cohorts, STOP PREYING ON OUR COMMUNITY!

Dexter Cato was born and raised in Bayview Hunters Point. His family continues to live in the home that he grew up in, next door to the home where he and his wife raised four kids. His father was a postal worker for over 38 years and his mother was a manager for Woolworths for 28 years. They have both passed away.

Dexter has been working since his was 15 years old. He has worked as a florist delivery driver, a carpenter and a longshoreman. He has been an active union member of Local 22, Local 10 and Local 91.

In 2000, Dexter and his mother bought the home next door to their family home. He had every intention of raising his family in the neighborhood.

In 2008, Dexter was the survivor of a work incident where his friend and co-worker fell to his death. Dexter took time off work to grieve.

Dexter and his wife refinanced in 2008 with Option One. The initial rate was 6.15 percent and it would cap out at 14.15 percent.

During this time, Dexter’s wife Christina, a Muni driver and SEIU 1021 union member, handled the finances. As the loan continued to increase, they submitted a request for a modification.

In 2009, because of a traffic accident, Dexter’s wife passed away, leaving Dexter and his four children – at the time, 10-year-old twins, a 14-year-old and a 21-year-old – with reduced income and at a loss with their finances.

Dexter, grieving, attempted to modify the loan. When the bank – by this point, Wells Fargo – began to claim missing paperwork, Dexter hired a lawyer who claimed that he would stop the foreclosure and get a modification. At one point, Dexter was paying $4,000 a month to this lawyer for the modification.

On April, 2, 2010, after being denied a loan modification and still under the impression that his lawyer was helping him, Dexter Cato was given a sale date for the price of $532,743. The lawyer claimed that he had stopped it.

In October of 2011, Dexter Cato and his children received an unlawful detainer notice. Dexter, distraught, quickly moved his family out. On Feb. 29, Wells Fargo served the final eviction notice to his empty house. 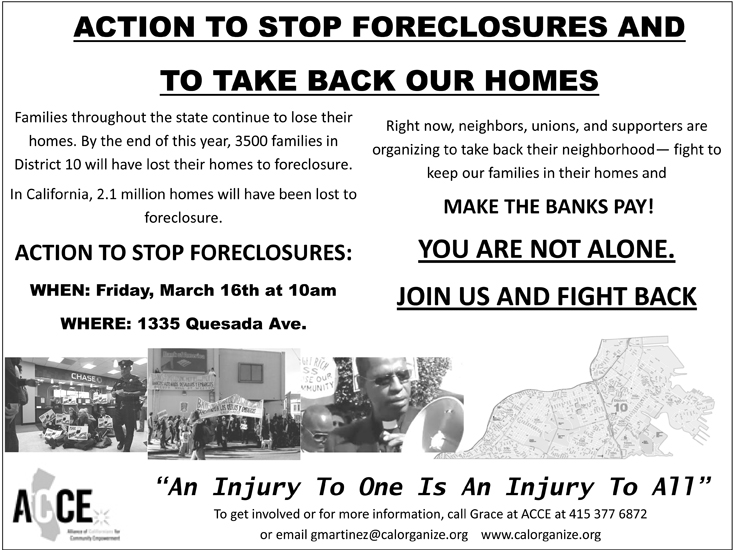 However, Dexter Cato and his children want their home back. They want the home that his wife and their mother helped create.

Many of you have helped keep Bayview residents like Vivian Richardson and Carolyn Gage in their homes. And, most recently, several of you got up at 6 a.m. to help defend Monica Kenney’s home from eviction.

However, the banks continue to foreclosure on families and destroy our neighborhoods. This week and the next few weeks are critical to the fight against Wells Fargo and all banks.

This Friday, we are continuing the campaign against Wells Fargo and all banks in our neighborhood by taking back our homes!

Every home Wells and big banks take, ACCE (Alliance of Californians for Community Empowerment) Foreclosure Fighters, unions, clergy and the community are going to defend and take back. If the banks refuse to declare a moratorium on foreclosures, we will declare our own until the banks work with families for fair and affordable solutions.

Join us this Friday, March 16, at 10 a.m. at 1335 Quesada at the home of Carolyn Gage, ACCE Foreclosure Fighter, who took back her home last November, for a rally and march to defend our homes.

For more information or to get involved in the fight and in planning more takebacks, call Grace Martinez of ACCE at (415) 377-6872 or email at gmartinez@calorganize.org.