by Gabriel A. Huerta 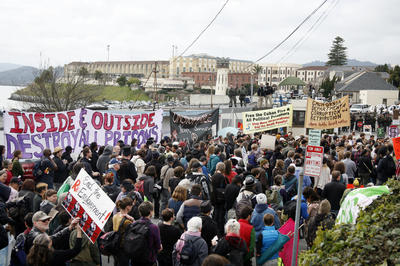 I’ve been watching the progress of the Occupy Movement for some time now and I’m really happy to see that it hasn’t fizzled out. In the same spirit that formed the unions of today’s dock workers, auto workers and miners when they challenged the injustices of what “Big Business” was doing at the expense of the common worker, today’s protestors are demonstrating great tenacity, that inner strength, as they struggle for the rights of the 99 percent – which includes even us prisoners.

We, the 99 percent, are fighting against that business psychology that calls out for “do more with less regardless of who it hurts.” The only thing the “fat cats” are interested in is the bottom line. If there’s no incentive for them to pay higher wages or to improve working conditions, then they’re just not going to do it if it cuts into their profits.

It’s very simple: If they’re paying 100 people $5 an hour to do a job and if they can get away with firing half of those workers and have the rest pick up the slack – while still paying them only $5 an hour – then that’s just what they’re going to do, and who cares about those they fired? Not the fat cats.

Increasing profits and increasing efficiency is the name of the game. Concepts like compassion, fairness and justice are not going to be factors considered by the fat cats, unless they somehow affect the bottom line.

The economics of a work stoppage does get their attention because it goes straight to the bottom line, and that’s exactly why what the Occupy Movement is doing makes perfect sense. If the fat cats are faced with a strike that will shut down their entire business for weeks or months, then all of a sudden they’re a little more understanding. It’s called “collective bargaining,” and it’s what the unions of today were built on to bring about fair wages and decent working conditions for millions of workers. I wholeheartedly support the Occupy Movement and I hope that more people wake up to push it through so that it can truly be successful.

Back in July of 2011, many of us here in Pelican Bay State Prison initiated a hunger strike that ended up spreading to many other prisons. In that same spirit of stubborn resistance that the Occupy Movement is showing, we were protesting the torturous and inhumane conditions of these isolation units in U.S. prisons.

I want to stress that our struggle is not over – not by a long shot – but some of our modest demands have already been met. One of the most important demands was a realistic way to work our way out of these isolation units. The CDCR representatives who met with our mediation team on Oct. 13, 2011, to stop the second hunger strike had promised that within 60 days they would present substantive changes to our mediation team for comment.

As of this writing, they still haven’t presented anything. [Since this letter was written, CDCR has released a new proposed gang management strategy.] We all expected that though because we’re all very familiar with how CDCR operates, and that’s why we all know that whatever program they come up with, which will come eventually, they’re going to set it up to fail. They want to sabotage it because that helps their bottom line. So expect it!

But I say to those it concerns: “Do not bite into their manipulations! Do not lash out against each other!” All that would do is work against us and keep the rest of us from getting out to that first step. Support from the mainlines in the form of stopping the madness is vital. The madness will only keep us from getting out.

So once this program starts, it’s important to make it work, to stay on the same page and not let the fat cats manipulate us to suit their “bottom line.” Just make it work, as we continue in our nonviolent push to be free from torture and to be treated as human beings.