by All City Revolutionary Collective 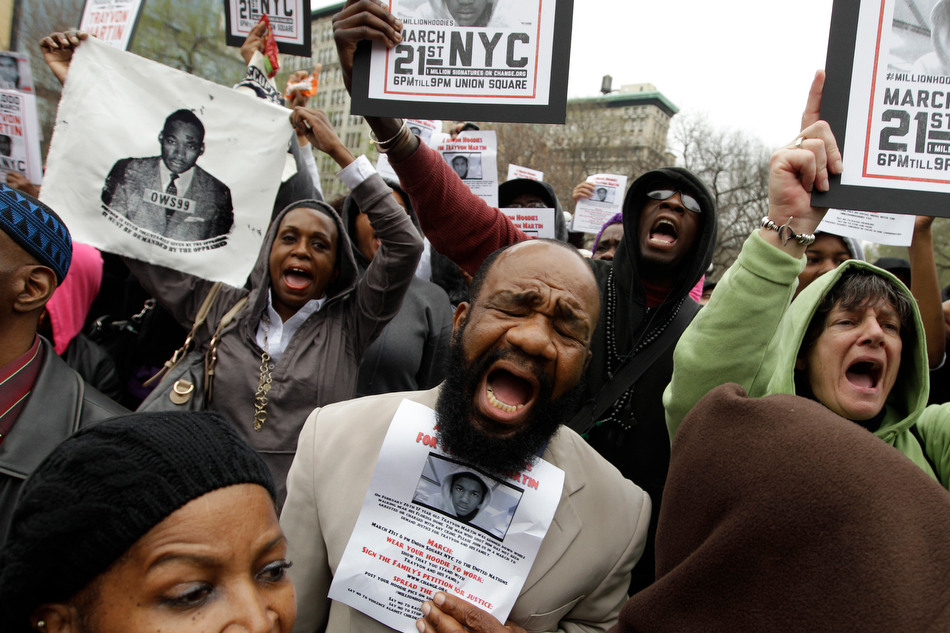 Last week, the #MillionHoodieMarch brought thousands into the streets, most of them young Black and Brown people. Together we changed our individual anger and sorrow at the murder of Trayvon Martin into a demonstration of collective outrage and power.

Even though the police tried to keep us on the sidewalks, thousands of us spilled out of Union Square and marched for hours all through lower Manhattan. For this, we celebrate! At the same time, we want to identify actions at the #MillionHoodieMarch that kept us from making the most of our numbers and energy, in order to draw lessons for the future.

First, there were several attempts by local politicians to co-opt and lead the march. At one point they even tried to get the crowd to lock arms as they stood in front of the people, while the police surrounded us. We need to be careful of attempts like this, since we know politicians try to co-opt and control movements for their own purposes.

The same politicians who blame the cops today, will ask us to vote for a Democrat tomorrow. The same politicians who talk radical when in low-level offices will act no different than George Bush or Barack Obama when in higher offices. This con game has gone on too long. We don’t need leaders, gatekeepers or spokespeople, as politicians so often try to be: We can lead and speak for ourselves. 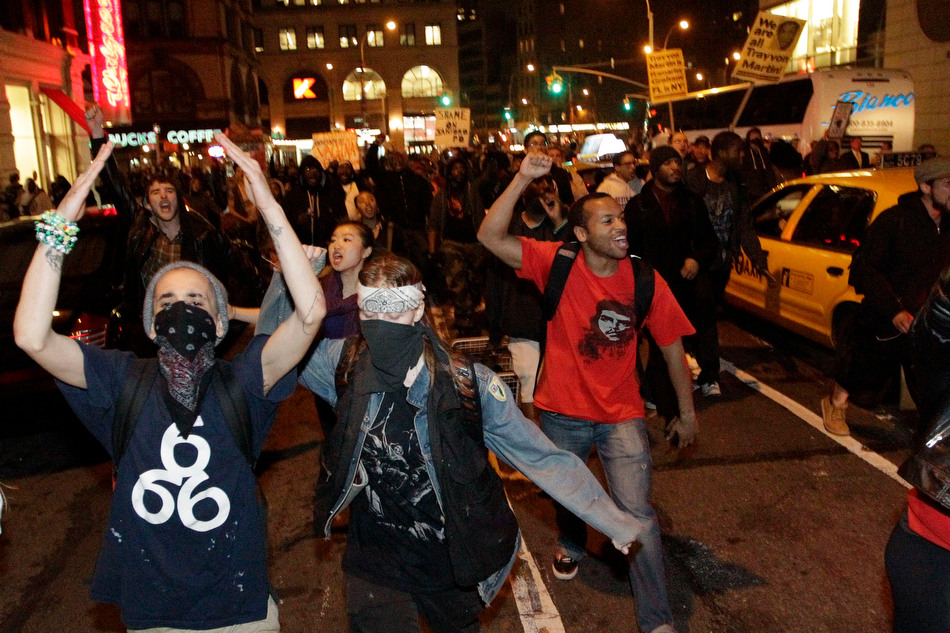 Second, there were attempts by fellow protesters to police each other’s actions. After the first march returned to Union Square, the politicians wanted to lead a rally, and members of Occupy the Hood wanted to stay with them. The authors of this statement started chants to march again, and got in a heated discussion with one member of Occupy the Hood, who accused us of jeopardizing the safety of people of color attending the action.

We believe safety is a fair concern, but we also need to recognize the self-governing capacities of people of color. Folks took to the streets at the #MillionHoodieMarch because they wanted to; they are not sheep who were tricked. Revolutionaries, the authors of this statement included, at best open the door to mass action. If people had disagreed with the call to march at that moment, our chants would’ve gone unrepeated and nobody would’ve left Union Square. We have to accept that Black and Brown people can make their own decisions, including militant ones.

We also need to acknowledge the danger of self-policing developing in the movement. Too often revolutionaries, including people of color, get blamed for what might happen to protesters at actions, when the blame for injury or arrests at protests can almost always be placed on the police. (Ironically, some elected officials that night said the police are not the enemy. We ask: Who is the enemy then? Why were we policed at the march?)

The tendency to blame each other is self-defeating, when we consider that it will require a bigger fight to stop police from murdering people of color. If we are to defeat white supremacy in the U.S, the struggle will have to get hotter. Of course we cannot foolishly take risks. At the same time, risks must be taken. We should follow the example of people of color revolutionaries from the past, get organized, and prepare for them.

Risks must be taken. We should follow the example of people of color revolutionaries from the past, get organized, and prepare for them.

Finally, at different points in the night, folks from Occupy Wall Street tried to steer marches to places that were more symbolic for Occupy than for the struggle against racist murder. When the first march circled back toward Union Square, OWS folks called on us to retake the park and bolster their occupation. When the second march reached 1 Police Plaza, OWS folks led us down to Zuccotti Park, and many people went home.

Let’s not confuse the situation: The #MillionHoodieMarch was not about Occupy Wall Street. It was about a Black man who was murdered by a racist vigilante, and all people of color who have been harassed, brutalized and murdered across the country, including some recent cases right in our own city. We should welcome the participation of OWS in mass demonstrations, but not permit them to put their own interests over the masses of people, particularly Black and Brown people taking action about issues pertinent to our communities.

The #MillionHoodieMarch was not about Occupy Wall Street. It was about a Black man who was murdered by a racist vigilante, and all people of color who have been harassed, brutalized and murdered across the country.

Still, we think the #MillionHoodieMarch was a big success. For one night, we came out thousands strong, and the feeling of rebellion was shared among us. From here we need to continue building. It isn’t enough to come out each time a Black person is murdered, no matter how great the march. It isn’t enough to institute police reforms and make the cops do their job – which is to terrorize Black, Brown and working class people – more nicely. 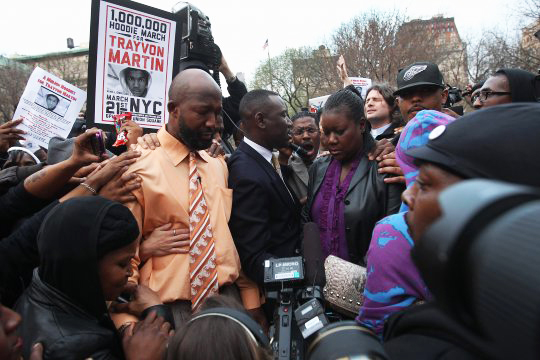 We have to build resistance on our own blocks and in our own hoods!

We have to move on cops, bosses and landlords whenever they attack us, from stop-and-frisks to evictions!

It isn’t enough to institute police reforms and make the cops do their job – which is to terrorize Black, Brown and working class people – more nicely.

We have to recreate safety in our communities, and prevent our people from taking out their resentment and desperation on one another!

We have to take community control of institutions that can help us!

We have to fight tooth and nail for respect and dignity, and transform our world!

The All City Revolutionary Collective can be reached at riverfl0w@riseup.net. 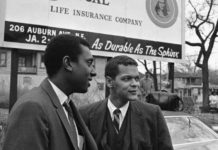