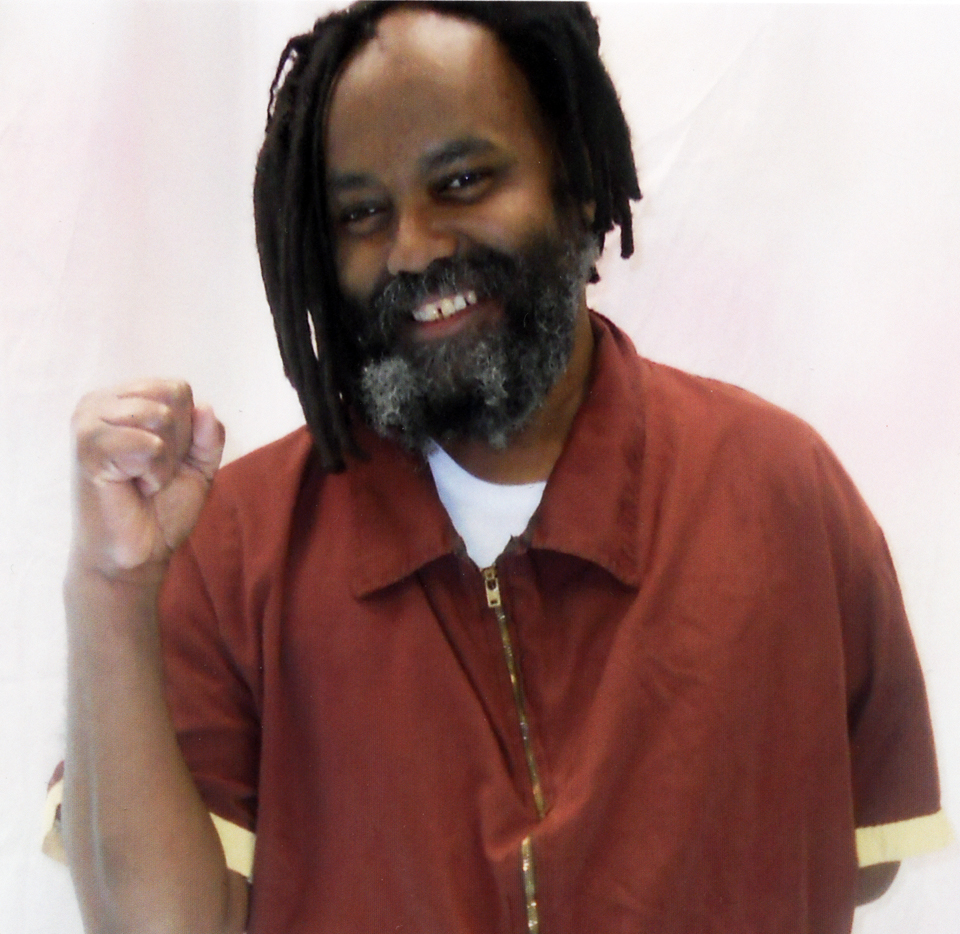 RT has become the first TV channel in the world to speak to former journalist and Black Panther Mumia Abu-Jamal since he was removed from death row in January. Abu-Jamal will spend his life behind bars for killing a police officer in 1981 [unless we free him – ed.].

Considered by many to be a flagrant miscarriage of justice, the case of Mumia Abu-Jamal has gained much attention worldwide. The defense claimed Abu-Jamal is innocent of the charges as the testimony of the prosecution’s witnesses was not reliable. For decades, supporters have rallied behind him.

After spending almost 30 years on death row, Abu-Jamal told RT’s Anastasia Churkina: “The truth is I’ve spent most of my living years in my lifetime on death row. So in many ways, even to this day, in my own mind, if not in fact, I’m still on death row.”

RT: If you were not behind bars and could be anywhere else in the world, where would you be – and what would you be doing?

Mumia Abu-Jamal: Since my earliest years, I was what one would call an internationalist – that is, paying attention to what is happening in other parts of the world. As an internationalist, I am thinking about life lived by other people all around the world. Of course, as an African American, I would love to spend some time in parts of Africa. But it is also true that I have many friends and loved ones in France. I would really like to bring my family, my wife and kids to come see our street in Paris.

RT: Being behind bars, you seem to be watching world affairs much closer than most people who are free to walk the streets. Which event of the last 30 years would you like to be a part of, if you could?

MAJ: I think the first would probably be the anti-apartheid movement in South Africa. Because of course once being South African, it was also global, because it was the touch point of white supremacy versus the freedom and dignity of African people. So South Africa would be a logical first choice.

But wherever the people are fighting for freedom, that wins my eye and gets my attention and moves my passion.

RT: You turn 56 at the end of the month, which means you will have spent more than half of your life behind bars. Most people cannot even begin to imagine that. What is it like? How has it changed you?

MAJ: The point and fact is I have spent most of my life, the bigger percentage of my life, on death row. And it cannot but have had a profound effect on consciousness and on the way one sees and interacts with the world. I like to tell myself that I actually spent a lot of that time beyond the bars, in other countries and in other parts of the world – because I did so mentally. But mental can only take you so far. The truth of the matter is that I spent most of my living years in my lifetime on death row. So, in many ways, even to this day, in my own mind, if not in fact, I am still on death row.

But wherever the people are fighting for freedom, that wins my eye and gets my attention and moves my passion.

RT: Your story has really become a symbol for many of a flawed justice system. Do you personally have any faith left in a fair and free justice system – considering your life has been so much affected by it?

MAJ: When I was a teenager and in the Black Panther Party, I remember I was going to downtown Manhattan and protesting against political imprisonment and incarceration and threats facing Angela Davis. When Davis attacked the prison system, she talked about perhaps 250,000 or 300,000 people imprisoned throughout all the U.S. as a problem to be dealt with, a crisis, a situation that bordered on fascism. Fast forward 30-40 years to the present, today there are more than 300,000 prisoners in California alone, one state out of 50. The imprisonment in California alone exceeds that of France, Belgium and England – I could name four or five countries – combined. 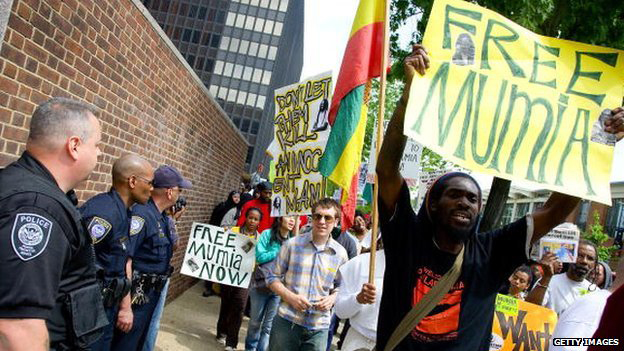 We could not perceive back then what it would become. It is monstrous when you really look at what is happening today. You can literally talk about millions of people incarcerated by the prison-industrial complex today: men, women and children. And that level of mass incarceration, really mass repression, has to have an immense impact in effect on the other communities, not just among families, but in a social and communal consciousness way – and in inculcation of fear among generations. So it is at a level and at a depth that many of us cannot even dream of today.

RT: You talk about so many important social and economic issues in your work; do you have a dream today? If you could see one of those aspects changed, which one would you pick? What do you wish you could see happen in the United States?

MAJ: There is never one thing. Because of the system of interconnectedness and because one part of the system impacts another part of the system, and because what Antonio Gramsci called hegemony of the ideological system impacts other parts of the system, you cannot change one thing that will impact all things. That is one of the lessons of the 1960s, because the civil rights movement was talking about integration and changing the schools. In point of fact, if you look at the vast majority of working class and poor Black kids in American schools today, they live and spend their hours and their days in the system profoundly as segregated as that of their grandparents, but it is not segregated by race, it is segregated by race and class.

The schools that my grandchildren go to are worse than the schools I went to when I was in my minor years and my teenage years. That’s a condemnation of a system but because former generations only concentrated on one thing or one side of the problem, the problem has really got worse and worse and worse. And while there is a lot of rhetoric about schools, American schools are a tragedy.

In point of fact, if you look at the vast majority of working class and poor Black kids in American schools today, they live and spend their hours and their days in the system profoundly as segregated as that of their grandparents, but it is not segregated by race, it is segregated by race and class.

RT: You were monitored by the FBI at the age of 14. Now with laws such as NDAA being passed in the United States, when people are watched, detained and can be held, that has become easier than ever. Do you think Big Brother has officially shown his face in this country?

MAJ: If you look back, it is clear that the FBI and their leaders and their agents knew that everything they did then was illegal and FBI agents were taught and trained how to break into places, how to do what they called black bag jobs and that kind of stuff, how to commit crimes. And this is what they were also taught: You’d better do it and you’d better not get caught, because if you get caught you are going to jail and we act like we don’t know you, you are on your own.

What has happened in the last 20 and 30 years – not just NDAA but the so-called Patriot Act – has legalized everything that was illegal back in the 1950s-1970s. They legalized the very things that the FBI agents and administration knew was criminal back then. That means they can look in your mail, they certainly can read your email, they tap your phone – they do all of that. But they do it in the name of national security. What we’re living in today is a national security state where Big Brother is legalized and rationalized.

RT: You have described politicians once as prostitutes in suits giving your apologies to honest prostitutes. It is election season in the US right now and we want to ask who do people trust, who would you vote for?

MAJ: Nobody. I have seen no one who I could in good conscience vote for today. Because most of the people that are out there are from two major political parties and all I hear is kind of madness – a wish to return to days of youth to the 1950s or they talk about the perpetuation of the American empire, imperialism. What is there to vote for? How many people consciously go to the polls voting for imperialism, for more war or voting for their son or daughter or father or mother to become a member of the armed forces and become a mass murderer?

What we’re living in today is a national security state where Big Brother is legalized and rationalized.

RT: You seem to have endorsed the Occupy Wall Street movement that has sprung up in the U.S. this year. Is this the type of uprising that you think could change America and do good in the United States?

MAJ: I think it is the beginning of this kind of uprising, because it has to be deeper, it has to be broader, it has to address issues that are touching on the lives of poor working class people. It is a damn good beginning, I just wish it was bigger and angrier.

RT: You are the voice of the voiceless. What is your message to your supporters right now, to those who are listening to you?

The RT (Russia Today) network consists of three global news channels, broadcasting in English, Spanish and Arabic, reaching over 430 million people, or 22 percent of all cable subscribers worldwide. RT’s YouTube channel was the first news channel to exceed half a billion views. This story first appeared on RT.com.