Pack the courtroom for his sentencing Friday, April 20, 9 a.m., in Department 27 at the Hall of Injustice, 850 Bryant St., San Francisco

Press conference: Why do we say ‘Free Fly Benzo’? 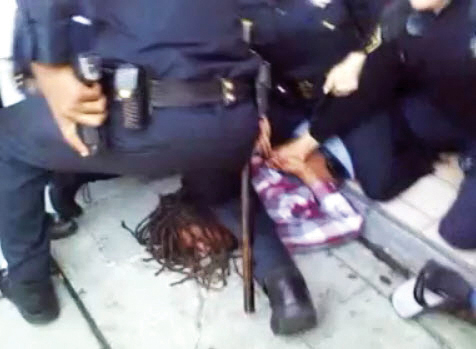 A press conference will be held Wednesday, April 18, at 3:30 p.m., on the spot where Fly Benzo (DeBray Carpenter) was arrested in October, in Mendell Plaza at Third Street and Palou in the heart of Bayview Hunters Point. Fly Benzo, Bayview Hunters Point resistance leader, emcee and City College student, is campaigning against trumped up misdemeanor charges. He faces probation or up to three years in county jail at his sentencing hearing on Friday, April 20, 9 a.m., in Department 27 at 850 Bryant, San Francisco.

Fly Benzo has faced repeated harassment from SFPD for his activism. He is well known for speaking out about the death of Kenneth Harding at the hands of the police. Twenty-four hours after publicly criticizing the SFPD on public access television last July, Benzo was approached by police and arrested. Benzo was released from jail almost four days later with no charges filed.

Unemployment, predatory lenders and police repression are pushing Black people out of San Francisco. We need to defend young leaders like Fly Benzo from unjust incarceration if we are to defend the right of all Black people to live in the city.

The murder of Trayvon Martin in Sanford, Fla., like the murder of Kenneth Harding and the campaign of repression against Fly Benzo in San Francisco, expose both how deep racism runs in the United States and how many people are willing to resist.

Let’s push now for justice for Kenneth Harding and Trayvon Martin and freedom for Fly Benzo!

As Benzo wrote recently: “Live ya life like a KING, don’t be the Enemy’s pawn / My folks in Africa need food, instead they sendin ‘em bombs / Don’t be blind to what’s goin on right in front of ya face / And put ya fist up in the air and middle finger to the jakes / Cause sleepin’ on the movement’ll be ya biggest mistake / That’s why you still gone see me ridin ‘til my sentencin date!”

Trial of a resistance leader

Dozens of supporters mobilized to sit in court with Benzo during his trial. At the end, although he was convicted of three misdemeanors, he was acquitted on a felony charge of resisting arrest, and the jury failed to reach a verdict on a felony charge of obstructing police with the use of threats or violence. “While the outcome could have been much worse, we wanted better,” said Benzo’s lawyer, Severa Keith. 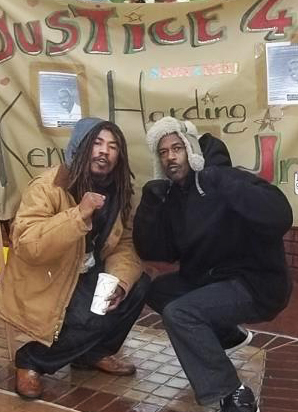 The confrontation began when Fry pulled the plug on a community boom box in Mendell Plaza, a neighborhood gathering place. Benzo was using his phone to video Fry and Norment when he was arrested.

Police pulled the plug on the sound while Benzo was performing at a neighborhood demonstration against police violence the day before as well. But according to Keith, “The judge refused to allow any evidence related to [Benzo’s] prior interactions with these officers, which included incidents of racist acts, threatening acts, taunting and evidence that their superiors had told them to video record him.”

Keith said she was “shocked” that such evidence was excluded. She said she is planning an appeal of the verdict. “It is clear from watching the video of [Benzo’s] arrest that the incident did not start on that day,” said Keith. “There was a history there, and the jury did not hear it.”

As Benzo said: “The court system cannot be trusted. There were no Black people on the jury. I was judged by my race and the way I wear my hair. Slavery and racism are alive and well.”

Benzo is known for speaking out about the July 16, 2011, death of 19-year-old Kenneth Harding, who was shot at 10 times by the SFPD as he ran away from officers through Mendell Plaza. Bullets pierced Harding’s leg and neck and entered his brain, killing him. Police now claim that Harding died of a self-inflicted gunshot wound.

The cops were chasing Harding from a Muni transit platform for not having a transfer as proof he’d paid the $2 fare. At the time, Benzo told a local television station, “Regardless of if they found a gun or not, it’s the fact they chased him from the T-train over a [$2] transfer.”

Twenty-four hours after publicly criticizing the SFPD again, this time on public-access television, Benzo was approached by police and arrested July 23, 2011, near the intersection of Oakdale Avenue and Lane Street. Benzo was released from jail almost four days later with no charges filed.

Despite the hardship of $95,000 bail and time in court, Benzo is working to progress at City College. “I’m working on a paper about African heritage for my English class,” he said. “I’m not doing so well, but the teacher said it’s amazing I’ve been able to do what I have.”

Alexander Schmaus is a staff writer at The Guardsman, the student newspaper of City College of San Francisco, where DeBray “Fly Benzo” Carpenter is a straight-A student. Alex can be reached at alexschmaus@gmail.com or facebook.com/alex.schmaus. This story first appeared on Socialist Worker.