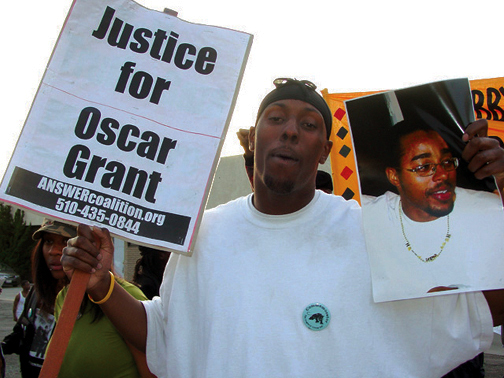 On Sunday morning, March 11, an army sergeant walked into an Afghan village and went house to house killing 16 civilians, nine of them children. The sergeant then took most of the bodies, including those of four little girls, and set them on fire.

There has been much discussion in the ensuing weeks about this man’s psychological make-up, family life, his childhood, the stress of being a soldier, PTSD etc. Whether with Lynndie England, the Hadditha massacre or the soldiers in Afghanistan who killed civilians and collected their fingers as trophies or the soldiers photographed urinating on corpses or burning Qurans – these individuals and events get understood in de-contextualized narratives that ignore the role of rationalized institutional violence, power and race which are at the heart of massacres and abuses like these.

They try to take the “war” out of “war atrocity.” The answer is neither that these soldiers are simply sociopaths nor that they are merely following orders, as was used to explain abuses at Abu Ghraib or the My Lai massacre. These explanations seek to individualize and isolate these incidents, while ignoring the fact that these are inevitable outcomes of war, especially counter-insurgencies like those in Afghanistan, Iraq and Vietnam.

The logic of dehumanization has been the core of American atrocities, from smallpox blankets, to slavery, to lynching, to internment, to training Latin American death squads, to depleted uranium, and to this pile of burnt children. This forthcoming individualized psychoanalysis imposes an individualistic rationale and moral framework on an entire project of war and occupation which is neither rational or moral.Lessons don’t get learned, and it is always simply a matter of time before this happens again. The media hand wringing and the fact that there is no strong anti-imperialist counterpoint are key factors in why these massacres continue to happen.

I am not arguing that this man is a picture of mental health, nor seeking to simply transfer sole responsibility onto the state. The trouble with simply looking at this through a psychological lens, however, is that it ignores, and thus normalizes, the social, political and cultural contexts of the world in which this man lives and his ascribed role in that world of war and occupation.

What was this man doing in Afghanistan? Was he on vacation? Was he there to feed the hungry and cure the sick? No, of course not. He is charged with “pacifying” a population he has been trained to see as inferior, a necessary prerequisite not just for the massacre, but for the day-to-day work of being a soldier in an occupied territory.

The unit of analysis in this conversation is the war, not the soldier. Media discussions of these massacres and abuses protect, guard and rationalize the state and its policies.

The psychological aspects of this role – stress, fear, racism, PTSD – are surely important, but they are inevitable aspects of any occupation. The unit of analysis in this conversation is the war, not the soldier. Media discussions of these massacres and abuses protect, guard and rationalize the state and its policies.

‘Don’t get caught up in no throne.’ – YasiinBey

Herbert Kelman and Lee Hamilton have written about the root causes of massacres like this. In looking at the My Lai massacre, in which U.S. Army soldiers massacred hundreds of civilians in Vietnam, they argue that psychological disorders are not the primary determinants of massacres. Instead they point to authorization, routinization and dehumanization as the key forces explaining actions such as the army sergeant’s in Afghanistan:

“Authorization processes override standard moral considerations; routinization processes reduce the likelihood that such considerations will arise. Still, the inhibitions against murdering one’s fellow human beings are generally so strong that the victims must also be stripped of their human status if they are going to be subjected to systematic killing. Insofar as they are dehumanized, the usual principles of morality no longer apply to them…

“Those who participate in the massacre directly are reinforced in their perception of the victims as less than human by observing their very victimization. The only way they can justify what is being done to these people – both by others and by themselves – and the only way they can extract some degree of meaning out of the absurd events in which they find themselves participating is by coming to believe that the victims are subhuman and deserve to be rooted out. And thus the process of dehumanization feeds on itself.”

Dehumanization is an inherently racializing and racist process that serves as the foundation for war and occupation at all moments. The United States’ ability to delegitimate the sovereignty of Iraq, or Afghanistan, or Iran – or Palestine – is bound up in this dehumanization, as Edward Said and others have outlined, making these wars and occupations feasible in the first place.

Dehumanization is an inherently racializing and racist process that serves as the foundation for war and occupation.

When Madeline Albright said that the 1 million Iraqi children dead from pre-invasion U.S. sanctions on Iraq were “worth the price” or when the first day of the U.S. invasion of Iraq in 2003 was presented as so many video-game highlights, the groundwork is laid for massacre after massacre. Dehumanization is the cornerstone on which the legitimacy of military orders and the routinization of war are built and which define the day-to-day lives of soldiers.

The fact that the tired, simple psychological explanations that follows in the reporting of these events will be accepted by tens of millions of people in the U.S. who lack the moral impetus to scratch the surface and look for a broader or better explanation is wholly indicative of how, ultimately, the fundamental dehumanization that allows these horrors to happen and to continue is the dehumanization that sits within the mind of the American populace as a whole.

Events like this unmask the collective complicity of the American people with these actions, done in their name. What we find in the media analysis and broader dominant political culture is the state’s reflection of itself – stoic, paternalistic and perpetually unaccountable. The American people are as bound up in the authorization, routinization and dehumanization of war as this Army sergeant.

Dehumanization and reciprocal violence in the ‘homeland’

To put this is in a further context of militarization and racial dehumanization, we need to look no further than our cities. The case of Lovelle Mixon, a young Black man from Oakland, who was killed after killing four Oakland police officers three years ago after police attempted to arrest him on a third-strike parole violation that likely would have landed him in jail for the rest of his life, is instructive.

Although the mass killing in this instance comes from someone subjected to racialized military logics of authorization, routinization and dehumanization, how this violence was understood, where sympathies lay and whether or not psychoanalytics were introduced to rationalize and excuse Mixon’s acts illustrates American society’s inability, again, to see the contexts which inform peoples’ actions and their entanglement with race and power.

Policing in our cities is a militarized process, with features quite similar to counter-insurgency in war zones. Just within California, the LAPD trained U.S. soldiers going to Iraq in urban policing, returning soldiers from Afghanistan have trained the Salinas anti-gang squad, and Israeli police and Bahranian military recently trained the Oakland Police and UC-Berkeley police. Whether in terms of surveillance, technology, profiling, racialized dehumanization, socially-unquestioned authority, or the inevitable and frequent abuses and killings of innocent people – urban policing and war do not just share similar logics, they are different derivations of the same logic.

Policing in our cities is a militarized process, with features quite similar to counter-insurgency in war zones. Just within California, the LAPD trained U.S. soldiers going to Iraq in urban policing, returning soldiers from Afghanistan have trained the Salinas anti-gang squad, and Israeli police and Bahranian military recently trained the Oakland Police and UC-Berkeley police.

Mixon, unsurprisingly, was quickly attacked in the press, false rape accusations were levied at him posthumously and he was immediately demonized – a monster. Where were the pundits talking about the stress of police surveillance or the PTSD of imprisonment?

Media coverage of both the Army sergeant and Mixon are designed to ignore context, legitimate existing structures, and do everything in their power to thwart a moral conversation about the nature of war – whether in Afghanistan or on the streets of East Oakland – even on the rare occasion that the victims are police officers, let alone the numerous incidents of unarmed Black men being killed by the Oakland police in the three years since.

From Detroit to Iran, the vampire’s fate is in our hands

Max Weber defines the state by its ability to harness and control the legitimate use of physical force. No state has ever had the capacity for force that the United States has. Nonetheless, that force is contingent, in the final analysis, on the state’s legitimacy.

It is an insult to injury for psycho-babble to be given the last word on the massacre in Panjwai, Afghanistan, as the U.S. continues its occupations and plans another. These relationships of race, power and violence are well ingrained in our political structures – prisons, police, military, culture – but are only naturalized and persistent if we let them be.

As the Obama administration pursues another war this election year, under the passive aggressive pretexts of “Israel’s need for security” or their right of “pre-emptive self-defensive”– or whatever contorted logic is getting thrown around – it is time to construct an explicitly non-sectarian anti-imperialist response.

Drawing from the energy of the Occupy movement and building or strengthening its relationships, collaboration and solidarity with those who find themselves on the other side of the guns we pay for, whether in Muslim countries or in our cities, is a necessary step. The previous anti-war movement got lost trying to find the right discursive frame that would resonate with the American people within the constraints of what passes for political debate in our culture.

Finding a palatable meme or simply expressing our outrage is not enough. Our timidity equals more piles of corpses, on a daily basis.

These expressions of violence are inherent in policing and warfare and the dehumanization that produces them and is reinforced by them. We get presented, again and again, with piles of burnt little girls in Afghanistan or little girls like Aiyana Jones – who was shot dead by Detroit police and filmed by A&E, who were embedded with those Detroit “troops” that night.

Expressions of violence are inherent in policing and warfare and the dehumanization that produces them and is reinforced by them. We get presented, again and again, with piles of burnt little girls in Afghanistan or little girls like Aiyana Jones – who was shot dead by Detroit police and filmed by A&E, who were embedded with those Detroit “troops” that night.

Are we to sit content with the fact that the American Empire is doing its best to destroy itself? We should not be content to wait for the light of day to be the undoing of the imperial vampire. The time is long overdue for us to construct an adequate dagger and to put the vampire to death, and to finally put this madness to an end.

Mike King is a PhD candidate at UC-Santa Cruz and an East Bay activist. He can be reached at mking@ucsc.edu.