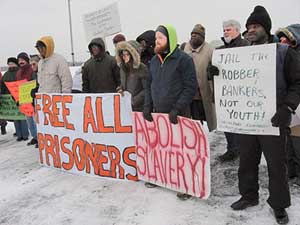 On Monday, April 30, at least 25 prisoners at Ohio State Penitentiary (OSP) began a hunger strike. They are demanding that the warden meet and negotiate with them for improved conditions in Ohio’s supermax prison. These hunger strikers say they intend to continue to refuse food until their demands are met. Another larger group of prisoners will show symbolic solidarity with the hunger strikers and workers outside of prison by also refusing food on a one-day fast for May Day, the international day of worker solidarity and resistance.

This is the second hunger strike at OSP this year. The first occurred on Feb. 20-23 in solidarity with the Occupy Movement’s call for an “Occupy for Prisoners” day of action. That hunger strike ended with Warden Bobby, as well as officials from Central Office in Columbus, promising to increase recreation time to the court-mandated minimum as well as improve enrichment programming, food quality and commissary practices. At this time, it is unclear if that promise was kept and what relationship, if any, the current hunger strike has with February’s Occupy for Prisoners hunger strike.

Ohio State Penitentiary opened in 1998. It houses over 270 level 4 and 5 maximum security prisoners and until recently also housed 116 of Ohio’s death row prisoners. OSP was built in response to the 1993 uprising at Southern Ohio Correctional Facility in Lucasville.

Monday, May 7, 2012, Youngstown, Ohio – Prisoners at Ohio State Penitentiary (OSP) continue the hunger strike they started on Monday, April 30, in solidarity with May Day.

The number of prisoners refusing food has fluctuated from 24 to 48 over the last week, as some prisoners joined late. Communication with the supermax prisoners has been limited since the beginning of the strike, but a clear list of grievances and demands has emerged from at least two sources.

The two primary demands are:

1. Improved commissary practices and increased state pay. The prison commissary can set prices at up to 35 percent mark-up on basic necessities like shampoo, food and soap. These prices fluctuate unexpectedly and are often prohibitive to prisoners without outside support, as state pay is only $9 a month.

2. A transparent and accountable security level classification process. OSP houses level 4 and 5 prisoners, the highest security level in Ohio. Once prisoners are classified at these levels and transferred to OSP, there is no clear process for how they can reduce their level and get transferred out of the facility. Prisoners can spend years in OSP without any negative conduct reports and still have no hope of their level being reduced.

1. Food portions and quality have been reduced due to austerity measures.

2. Inadequate medical care. Also due to austerity cuts, prison officials have stopped sending prisoners to outside treatment centers for MRIs and EEGs unless their conditions are considered life threatening. They also often ignore doctor recommendations for pain medications.

3. Lack of enrichment programming. There are strict bans on many books and movies, and the institutional television channel has little variety. One prisoner said they run the same programs on a loop every six months.

The two sources for these demands are an open letter written to the local Youngstown paper by prisoner Marcus Harris and phone conversations with a trusted anonymous source inside the prison. This source also stated that at least one hunger striker has been punished for his participation, sprayed with mace in his cell and sent to disciplinary isolation. This report has not yet been confirmed.

Warden David Bobby met with hunger strike representatives for three hours on Wednesday, May 2. He says he will “continue to communicate with the inmates and listen to their concerns.” Thus far, the warden has called a committee to review commissary practices, comparing them with other Ohio institutions.

He says that the security level classification system is not uniform because it takes the reasons a prisoner was transferred to OSP into account. One prisoner source was familiar with this argument. He described a situation where someone got sentenced to Level 5 at OSP for 48 months or less. He got no negative reports for those 48 months but was still denied a security transfer because of “the reasons he was originally classified Level 5, but they already knew that when the brought him in and told him it’d be 48 months or less.”

This prisoner also said that consequences for petty conduct reports, like refusing to cuff up or return a food tray, have recently increased. “Someone who used to be sent to the hole for 16 days now might be dropped a level from 4 to 5.” He considers these changes an attempt to keep OSP full of prisoners as “job security” for the warden and officers.

The warden said OSP currently has the most prisoners it has since it opened in 1996. He also said the current hunger strike is the biggest hunger strike since he became warden four years ago. It is also the second hunger strike this year.

In February, 25 prisoners went on hunger strike for three days. Two major demands from that hunger strike were increased recreation time, to the court required minimum of five hours a week, and improved commissary practices. The recreation time demand was met, but the prisoners say the current hunger strike “follows directly” from the neglected commissary demand from February. The warden says he does not remember what the demands in February were and that the recreation schedule has changed repeatedly since the transfer of death row from OSP to Chillicothe last December.

Prisoner Mark Harris’ letter ends: “In short, we are sensory deprived, underfed, isolated with little to no movement, unable to hug our children, family and friends, and we are stuck for an overly extended period of time with limited programming.” He requests that people use “whatever resources [they] have to help spread the word of our cause, to call and check up on us and our health and also to look into these matters.”

Ben Turk can be reached at insurgent.ben@gmail.com.