This letter responds to an opinion piece by Aubrey Stone, head of the California Black Chamber of Commerce, that was published in Black Voice News and Our Weekly. 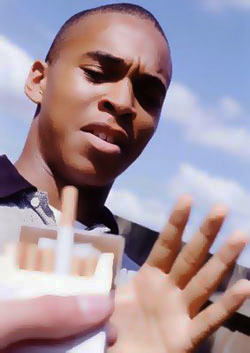 Yes, Mr. Stone it is that time of year again: election time. That means it is time for those, like yourself, who do the bidding of the tobacco industry to step up and earn your keep. Your relationship and that of the California Black Chamber of Commerce (CBCC) to the tobacco industry is documented in the previously secret internal industry documents that were released during tobacco litigation.

While the tobacco industry has “been very, very good” to the CBCC, so much so that the Altria (Philip Morris) logo is proudly displayed as a corporate sponsor on the CBCC website, your close corporate buddies are responsible for the deaths of the 47,300 Black folks who die from tobacco-related diseases every year. That number doesn’t take into account those who die from secondhand smoke or their children, who have the highest asthma rates, or those who suffer from having a poor quality of life before dying.

Mr. Stone, you know good and well – or at least you should know – that tobacco companies are federally adjudicated racketeers who lie to congress, buy off elected officials and perniciously prey on our communities. Those blood suckers would probably wither and die if they actually came out in the light of day. But why should they come out from under the rocks when they can pay others, like you, to do their heavy lifting?

As you stated, California’s airwaves and mailboxes are full this time of year, but they are full thanks to the tens of millions of disinformation dollars that the tobacco industry is dumping here to defeat Prop 29. Statistics show that the truth about Prop 29 is that raising the cost of cigarettes by a dollar a pack will save lives, keep our kids from smoking, generate $550 million for cancer research, $150 million for tobacco prevention and cessation, AND without costing the state anything it will actually SAVE California taxpayers $5.1 BILLION in long term healthcare costs.

Mr. Stone, your false arguments have little to do with the real issues. “Proposition 29, the California Cancer Research Act,” as the name implies, is about “cancer research.” Over 160,000 African Americans will be diagnosed with cancer in this year alone. That’s one hundred sixty thousand Black men and women.

Whether it is from breast, prostate or lung cancer, African Americans are profoundly affected by cancer in ways that other racial and ethnic groups are not. African American women under 45 are at greater risk for triple negative breast cancer, which is the most aggressive type of breast cancer and the hardest to cure.

Who among us has not been profoundly touched by cancer? WE NEED RESEARCH! Instead of lending your voice to help set a relevant cancer research agenda, you are instead aiding and abetting the tobacco industry as it continues to blow its toxic smoke screen.

In your letter you state that you’re concerned about health disparities … Puh-leeze! Your cow-towing to the tobacco industry says otherwise: It is precisely the predatory marketing of tobacco products specifically in our communities that drives these health disparities in the first place.

Tobacco-related diseases kill more Blacks than AIDS, violence and other non-tobacco related cancers combined. Being faced with these facts, the tobacco industry buys silence and complicity by throwing us a few crumbs of lobbying dollars, campaign contributions and scholarships, all the while continuing to rake in billions of dollars in profits. Billions of dollars in profits that, by the way, leave our state.

The research funding for Prop 29 will stay in California and it will be administered by the University of California chancellors, cancer care center directors and other stakeholders who will not, as you claim, receive six-figure salaries. They will not receive anything because they are non-paid positions.

You incorrectly state that none of this funding will go to our needy schools, when in fact over $29 million will be allocated to the California Department of Education for programs to prevent and reduce the use of tobacco products. Perhaps this funding will be used to educate students about a recently released Stanford study documenting that in neighborhoods with higher percentages of underage African American high school students, the price of menthol cigarettes goes down and the amount of advertising goes up.

This funding can also stop our children from becoming orphans by keeping their parents and grandparents from dying prematurely from tobacco related diseases.

Carol McGruder and Dr. Phillip Gardiner are co-chairs of the African American Tobacco Control Leadership Council. The AATCLC has over 150 years of tobacco control experience in public policy, research, prevention, community capacity building and cessation. Carol McGruder can be reached at cmcgruder@usa.net. Learn more at www.savingblacklives.org.